Silent as the Grave

When the booster wrappers of Arcane Rising were spoiled in January, our players got busy with speculation as to what each of the new heroes might be and how they'd work. I was particularly impressed with the fan theories that surrounded Azalea, our "Assassin" or is it" Hunter", or maybe "Ranger". Either way, fans knew she used a bow and ideas of how that might work were abound, and some came impressively close to figuring out her mechanics!

I am really happy that we have delivered Ranger mechanically in a way that is obviously intuitive to the players, using your bow to "load" arrows into your arsenal! For those who missed it yesterday, the prophetic DMArmada previewed the first Flesh and Blood bow, Death Dealer, along with Searing Shot. 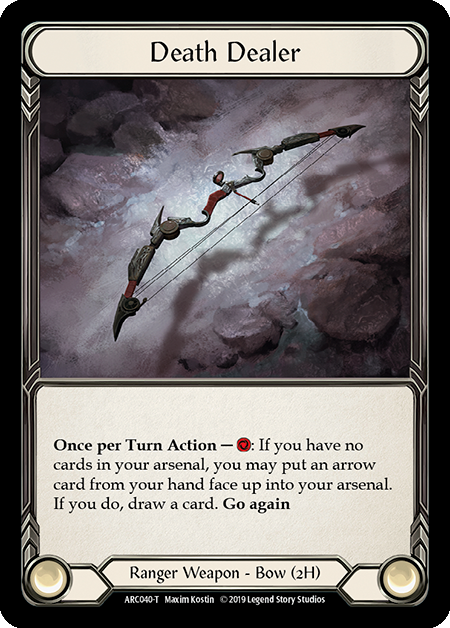 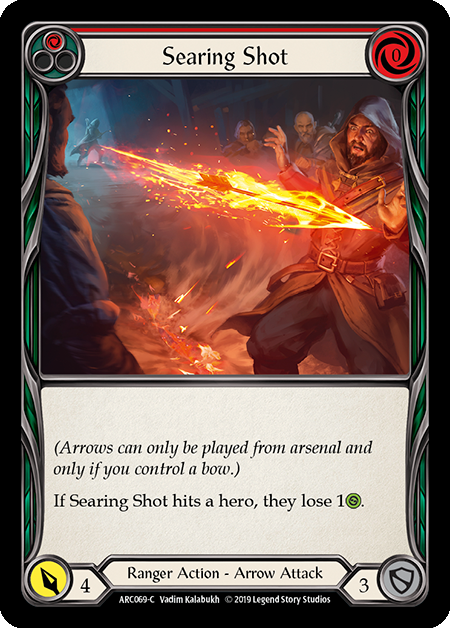 It's very simple in its theme and application: draw back your bow to load, and ready, aim, fire!

We wanted to capture the feeling of arrows being dependent on having a bow, and the mechanical action required to load them, which when in combat takes time and is therefore restrictive. That is what lead us to arrows only being able to be played from arsenal (the restrictiveness of having to load them) and requiring a bow (the dependency) which loads them.

I imagine most projectiles to be lightweight, but able to inflict serious damage. All arrows in Arcane Rising cost 0 or 1, with baseline power and defense stats, but effects that push their potency above curve. 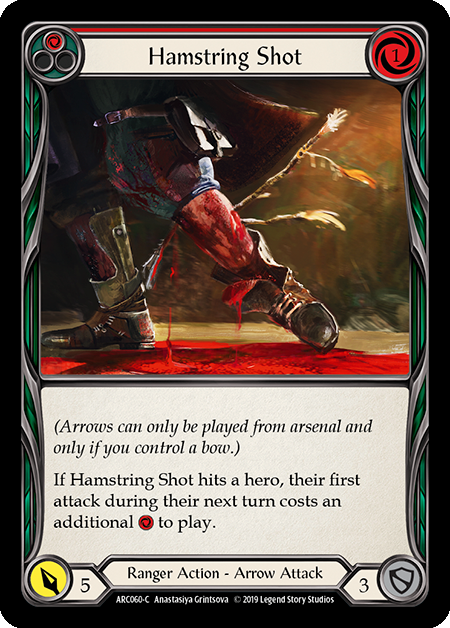 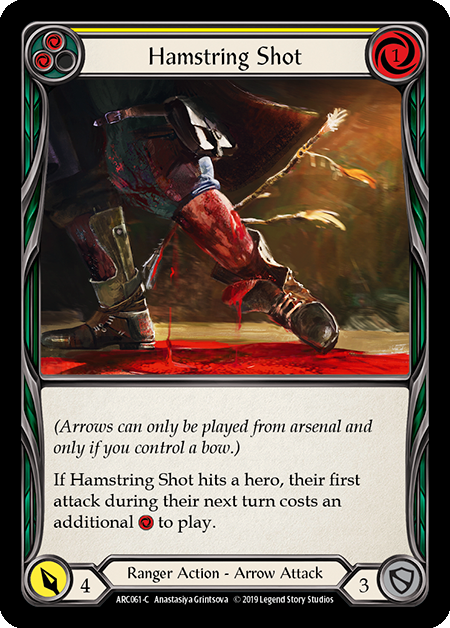 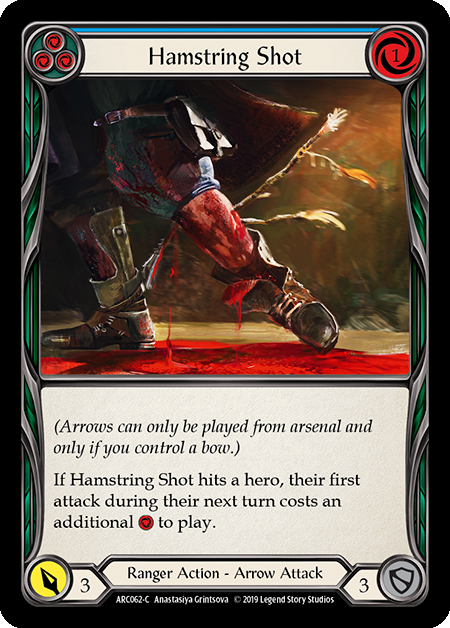 Azalea comes from The Pits, a grimy, chaotic, slum of a place, and home to Rathe's finest purveyors of skullduggery, illicit goods, and no-good endeavors. If it shouldn't be done, you'll find it in The Pits.

The hub of underhanded commerce is Blackjacks Tavern, whose warm lights and roars of ale filled bellies serve as welcome respite for scullers who manage to make it to dock from their perilous contraband runs through the web of underground canals that span the breadth of Rathe.

Blackjacks has more to offer than what's on the menu... if you know how to ask. One such off-the-menu service is "problem solving". An easy problem to solve, and tavern keeper Greenbird will send her little birds to off to find, perhaps a 3 of clubs. An important problem... that may require a jack of diamonds. But for the big jobs, nothing beats an ace of spades! 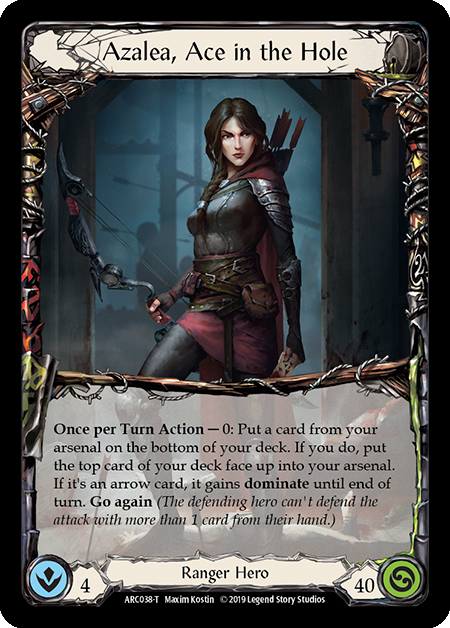 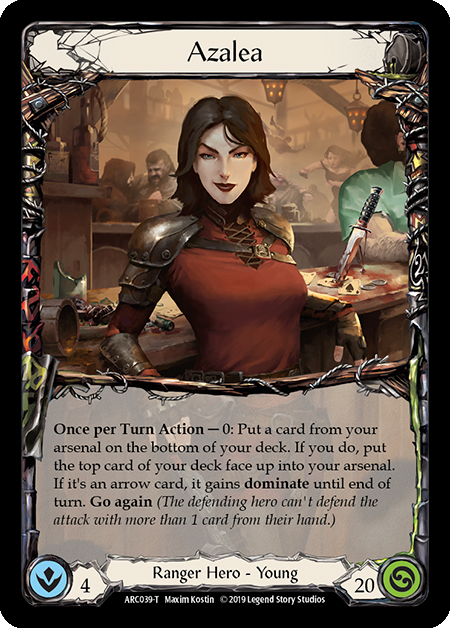 Azalea is calculating. She can count to 1. That's how many shots she gives herself to complete a job.

Playing Azalea is about setting up your position, taking aim, and firing off 1 kill shot per turn. Top of deck matters is a theme that runs across multiple heroes of Arcane Rising, each mattering in a different way. Azalea's hero ability draws from this theme, in a way that reflects her taking the time to set up her position, so that 1 shot does the job.

Azalea's hero ability does more than capture her character and tie into the top of deck matters theme of Arcane Rising. It solves a vulnerability of a hero that depends on their arsenal to play the game; becoming arsenal locked. Without Azalea's ability to cycle her arsenal, the risk of putting a card in the hole that has a dependency to play, such as defense reactions, is too high. Even with her arsenal cycling ability, careful management of your arsenal, and deck building choices, is required to ace the opposition.

There are plenty of cards in Arcane Rising to help you set up the kill shot... 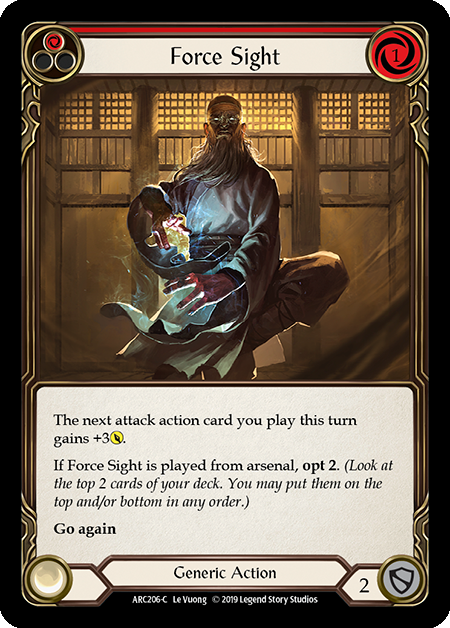 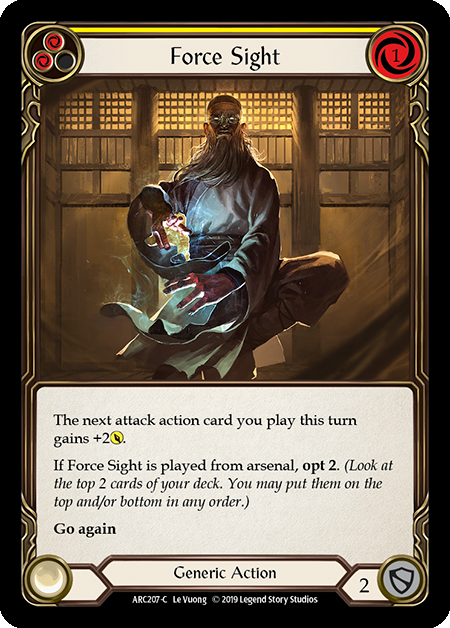 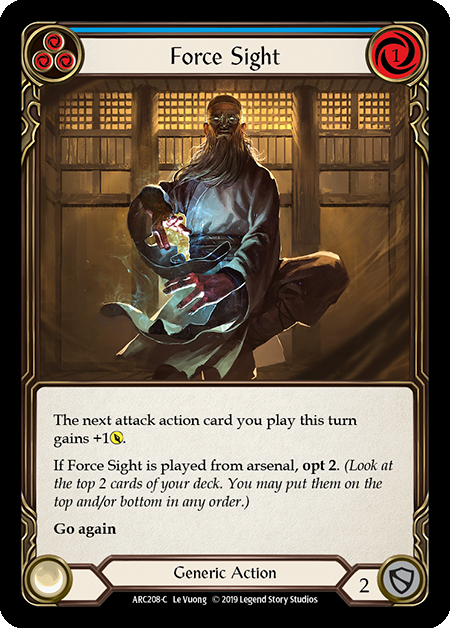 Remember, take your time, set up your position, and aim for greatness at a pre-release event March 21-22, with Azalea, Ace in the Hole!

The Jaws of Death

Check out some of Azalea's backstory, with accompanying illustration by Daniel Jimenez!

Find a pre-release near you!