Players from both local communities and those abroad gathered for the second of the US Calling events. The Calling Dallas Fort-Worth is the first to run Tales of Aria sealed for the main event, seeing players harness the elements in their fight to the top. With vendors, side events, trading, the Pro Quest event, and connecting with friends new and old, the hall was filled with the sounds of a community coming together to enjoy games in the flesh and blood. 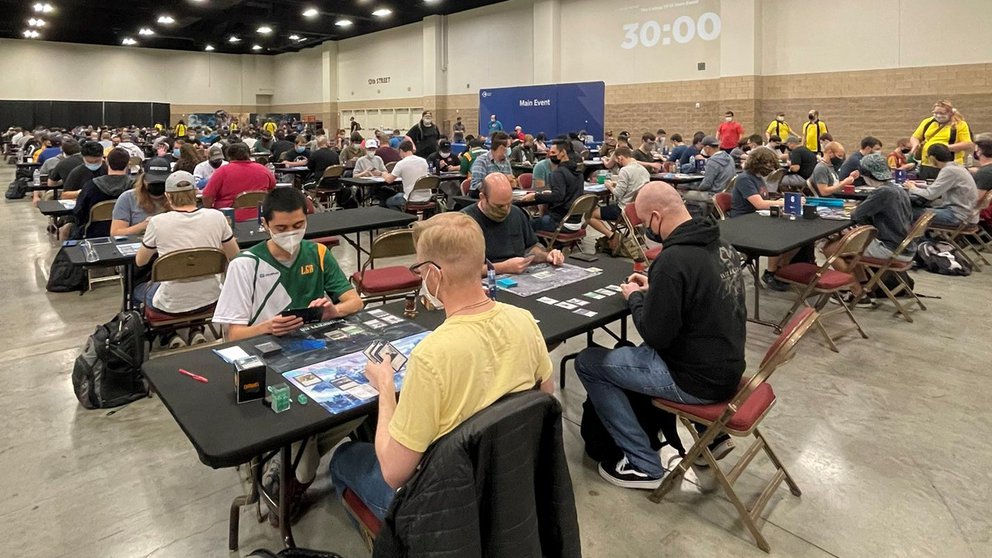 Commentary for the event's livestream came courtesy of Tannon Grace, RedZoneRogue, and DMArmada, who also did a fantastic job at The Calling: Las Vegas last month. A huge thank you also to the ChannelFireball coverage team for their work on the stream.

Matt Rogers, winner of The Calling Auckland 2021, was undoubtedly the player who travelled the furthest, coming all the way from New Zealand to attend the event. He'll also be participating at The Calling: Cincinnati this weekend!

Steven Wooley and Zach Bunn from Team Covenant also participated, with Steven going 7-0 with his undefeated sealed deck in the main event.

Rob Cygul of Tolarian Dropouts, who was the second player in the US to reach 1k XP, joined in the fray. Rob finished a heartbreaking 33rd, just missing out on the top 32 draft, but you can catch him on live commentary for the next Calling event in Cincinnati.

For a play-by-play of the day's events, you can check out our Day 1 and Day 2 Snap Shot articles. 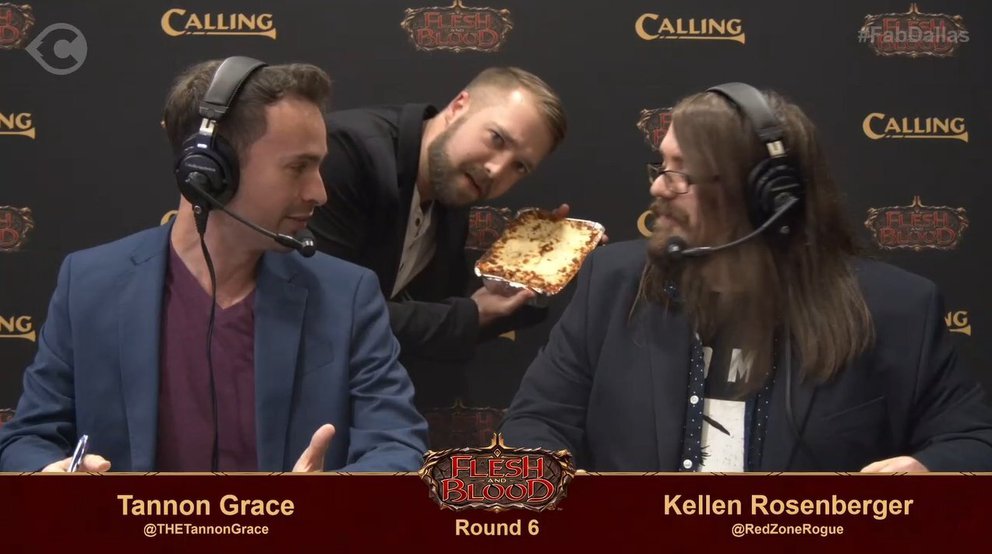 502 players sat down on Day 1 to construct their sealed Tales of Aria decks, fighting for their place at the drafting table.

Coming into The Calling Dallas Fort-Worth, there was much discussion about what is the best strategy for building a sealed pool and even more so when it came to the draft portion. Tales of Aria introduced not only three new heroes but three new elements, Lightning, Ice and Earth. When evaluating the six packs to make the sealed deck the Lexi player would ask themselves; “Do I have enough arrows?”, the Oldhim player; “Is my threat density high enough?” and the Briar player; “How’s my balance of attack actions and non-attack actions?” Across all three classes ensuring there were enough element cards to be used for fusion was also a very pressing issue.

When Lexi’s abundance of arrows didn’t come or it looked like Oldhim wouldn’t deal enough damage to get the job done, Briar with the essence of Earth and Lightning often became the one.

There was almost exclusively a forest green sea of Candlehold for all to behold at the top tables throughout much of the sealed deck rounds. Between the inevitable clock of Rosetta Thorn and Briar’s direct damage, there was no doubt that the Elemental Runeblade had fully blossomed and become the hero to beat in the sealed deck portion.

Briar’s sealed dominance was on full display as many world renowned players including Matt Rogers, Brendan Patrick, Saint Hung, Steven Wooley, Dante Delfico and one of this weekend’s Calling Cincinnati casters Rob Cygul all chose to become forces of nature and play as Briar.

The players who made the Top 32 cut included some of FAB's most prominent competitive players such as Brendan Patrick and Matt Rogers, alongside newer players such as Kendall Burdette, whose first event was a Tales of Aria pre-release.

At the start of round 8 the drafts began. This is where we would see more refined decks, a broader range of heroes and the intricacies of the brilliant Tales of Aria draft format in full bloom.Nam Vo of team The Card Guyz drafted Oldhim not once, not twice but thrice on his way to victory. Lexi fans around the world rejoiced as the Elemental Ranger was making it her mission to seek and destroy all in her path whether it be thanks to the essence of Ice or Lightning, and was well represented in the draft rounds. Another heartbreak moment of the day came for reigning New Zealand national champion and The Calling Auckland 2021 winner Matt Rogers in round 12. We saw Matt on Lexi take on eventual runner up Nick Zimmerman on Oldhim in an absolute nail biter of a win-and-in to top 8. Nick and Oldhim took this one out after a dazzling display of power and precision from Matt and Lexi. 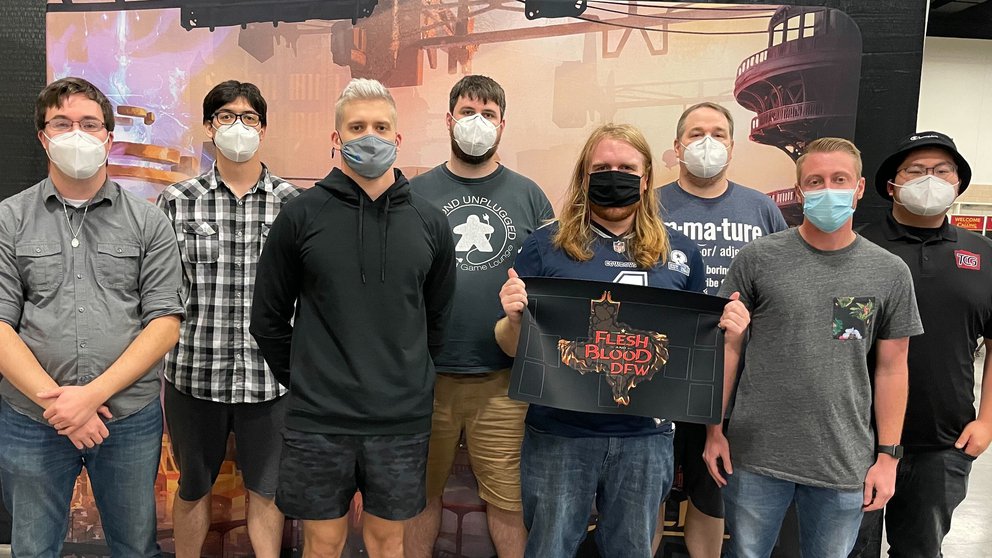 The top 8 draft was something to behold as five players drafted Briar, two players Lexi and the only Oldhim drafter, Nam Vo, was able to pick and choose whatever he wanted from the packs to build what many proclaimed was a deck that more closely resembled a Blitz deck. As more players draft the same hero, the more the card pool is watered down and the more people are fighting for the same cards. This saw three of the five Briars leave the tournament in the quarter finals and the other two drop off in the semis. This could be much accredited to the power and consistency of the Lexi and Oldhim decks which sent the Briars packing and then went on to meet each other in the final. 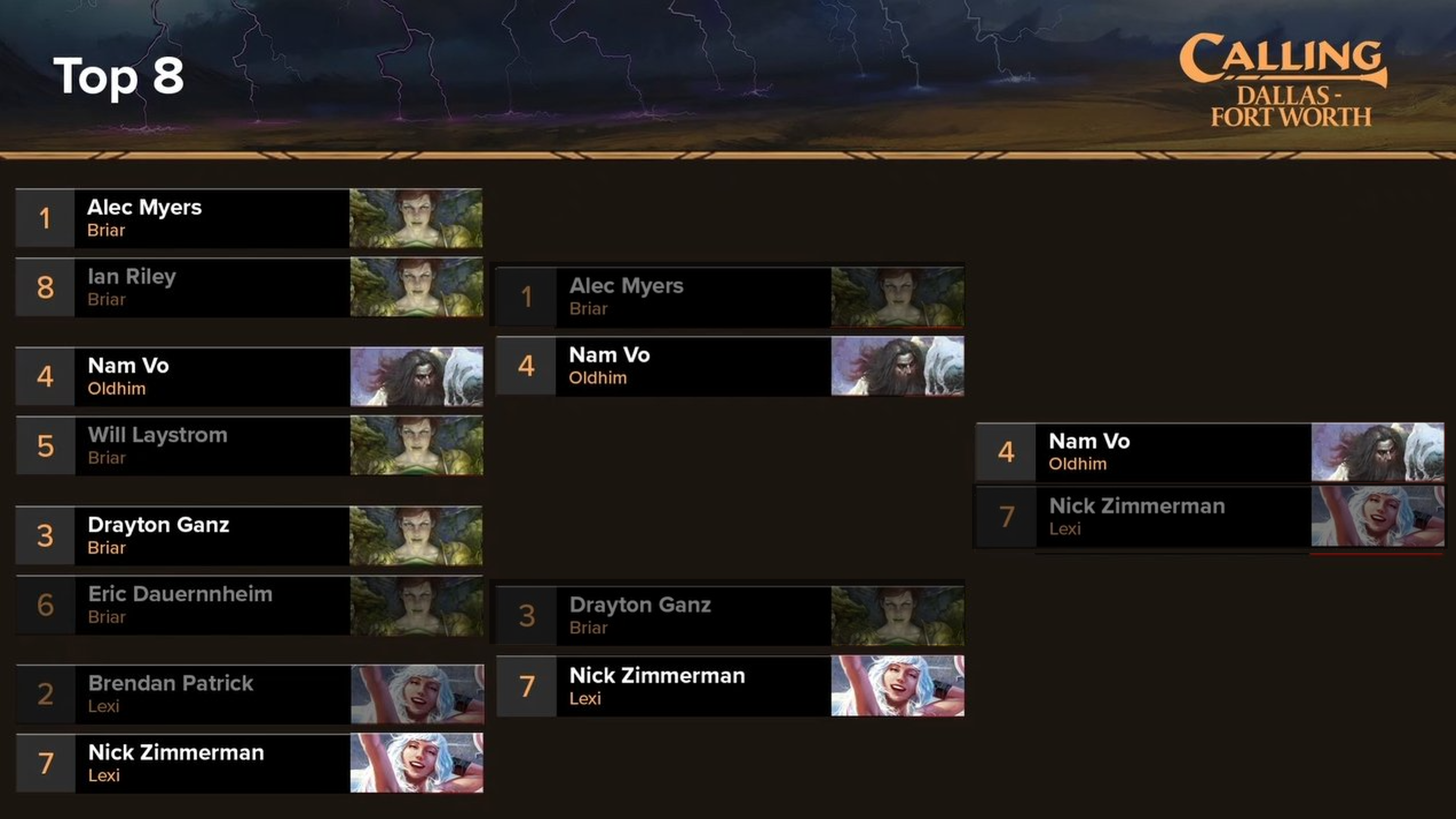 Nam Vo’s Oldhim deck went against the grain, attacking the Tales of Aria draft micro metagame in the form of defense rather than offense. Being the only Oldhim drafter at the table certainly helped Nam in his quest to become champion, but it was his deliberate, slow and steady pace, controlling the game and playing it on his terms which in the end brought him the trophy and saw his name etched into history for all eternity. 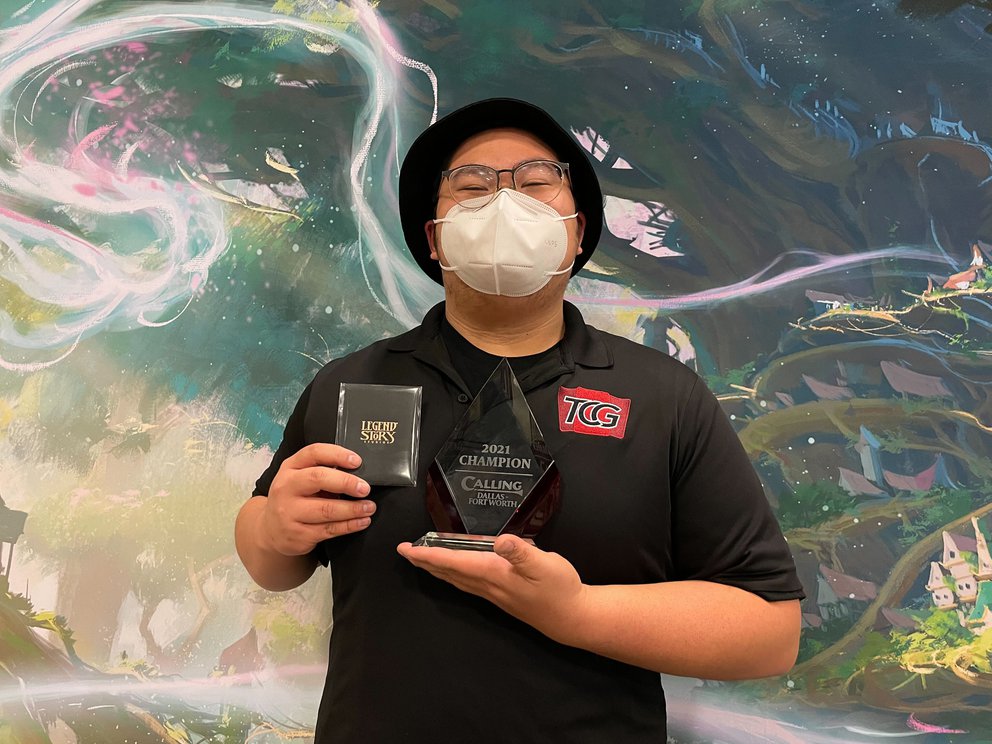 For those who didn't make it to Day 2, the second major event of the weekend was about to get underway. The ProQuest Classic Constructed tournament is the world's first look at a major event post-Tales of Aria, showing how the new set's release would shift the metagame. 164 players joined the fight for a Pro Tour invitation, leading to a Top 8 with six different heroes. 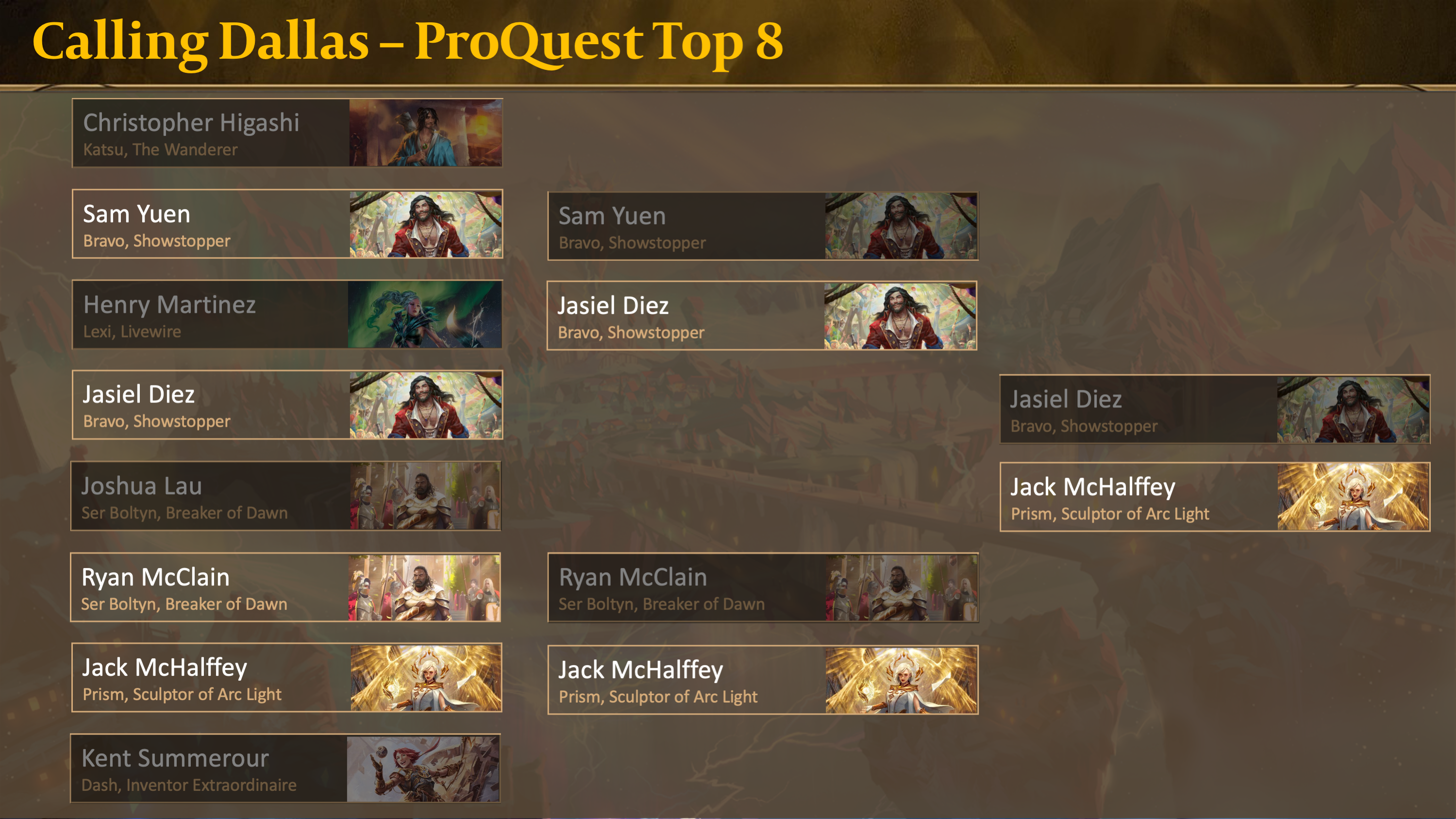