Animation by Michał Makowski, Illus. by Alexander Mokhov
About Learn

A young lieutenant in the Hand of Sol, Dorinthea Ironsong has dedicated her life to defending the people of Solana. Once, her kind heart and natural curiosity lead her to question her elders, forgoing the orders of her superiors in favour of following her heart. Yet her brash actions put the party in danger, and her fellow knights paid for her mistake with their lives. Thea has since learned to follow the wisdom of Sol in all aspects of her life, vowing to honour the memory of those that were lost that fateful day.

Thea is a formidable opponent on the battlefield, a prodigy swordswoman who uses both skill and strategy to her advantage. Wielding the Dawnblade, she is graceful and nimble, darting past her opponent’s defenses to make every attack count.

Warriors are masters of close combat, in their prime engaged steel to steel. Reprise is an effect that is turned on when the opponent defends with a card from their hand, capturing the concept of the warrior being engaged. The word reprise is inspired by the fencing maneuver to strike again immediately after being defended, and an ode to Thea's "Ironsong" heritage, being the repetitive song of a blacksmith; metal striking metal.

A masterful swordsman with a special affinity to Dawnblade, Dorinthea's ability alone is able to unlock its power. The centerpiece of the Dorinthea deck, when Dawnblade grows in power, it takes control of the battlefield.

Take up the mantle of the proud warrior, and join the ranks of the Hand of Sol. With the blessings of the light and the faith of your people, it is up to you to protect the innocent, and spread the word of Sol across Rathe. You are a representative of Solana, the Hand of Sol, and it is your sworn duty to help others see the light. 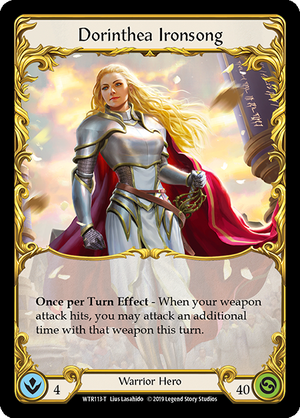 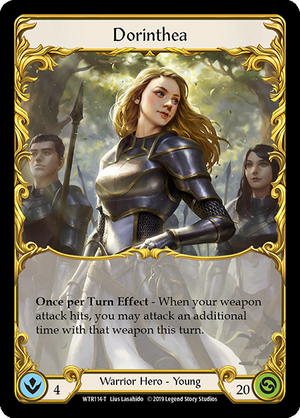 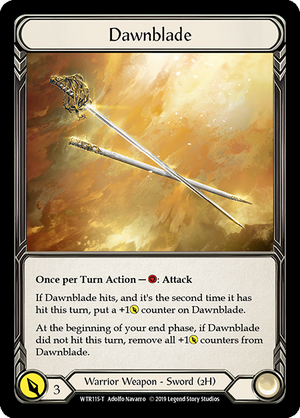 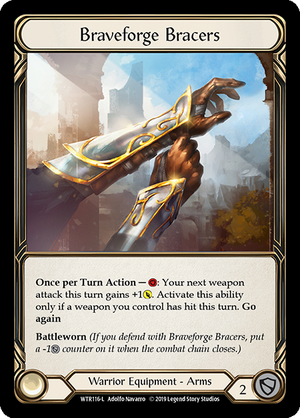 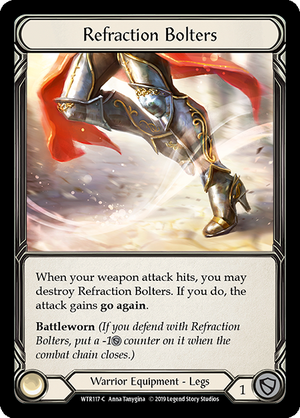 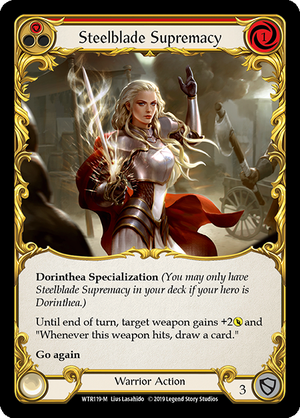 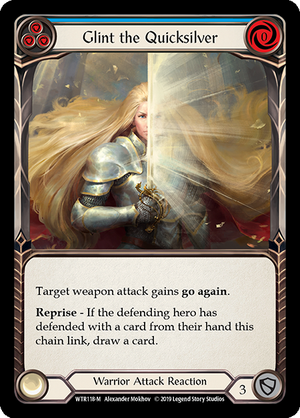 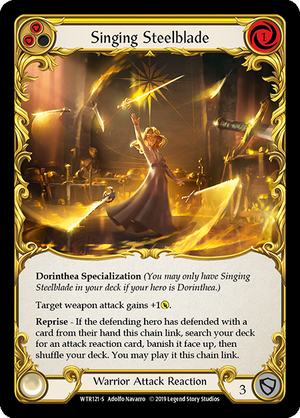 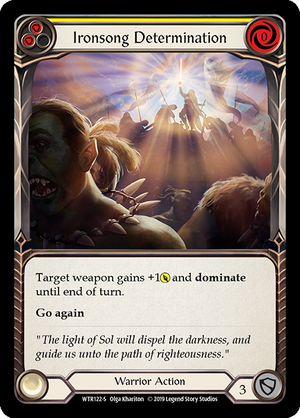 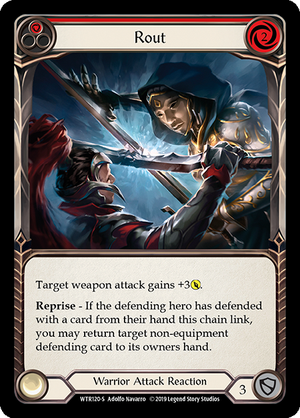 Dorinthea is the hero from Welcome to Rathe designed around her weapon and designed to play the game in the reaction window. It's the threat of "the possible" that a great Dorinthea player must employ to outsmart the enemy. Dorinthea's hero effect allows you to by-pass the "Once per Turn" clause of Dawnblade, but you still need an action point to attack with Dawnblade an additional time.

She listened to her heart and it lead to tragedy. Now she must redeem herself.

The sword that chose her, Dawnblade and Dorinthea are one. Dawnblade is the centerpiece of the Dorinthea deck, with most of her cards revolving around growing Dawnblade by attacking multiple times in the same turn.

Never shy from combat, bravery must be forged into the spirit of a noble warrior. The legendary Braveforge Bracers rewards those who do not yield. Swing once, and swing again until the enemy is vanquished!

A key piece to the Dawnblade plan. Refraction Bolters allows you to give Dawnblade 'go again' after it hits, so you can attack an additional time with your radiant blade.

With the swing of her sword, Dorinthea's signature move has the power to swing the game in your favour. Steelblade Supremacy's effect lasts for the entire turn, meaning you draw a card each time you hit with Dawnblade!

A master swordsman is attuned to using every detail to their advantage. The angling of the blade to reflect the beaming sun can be the unexpected edge that opens up the enemy for the winning strike.

When Dorinthea stood before the thousands of meticulously crafted artifacts for her awakening ceremony, to the surprise of all, every sword in the room rose into the air, swirling and dancing in harmony, filling the room with their iron song. However, there was one song that resonated with Dorinthea. She raised her hand, and Dawnblade gently came to settle in her palm.

Ironsong Determination gives Dawnblade +1 power and dominiate for the entire turn, which is significant when you are aiming to attack twice with Dawnblade. Ironsong Determination is the only card in Welcome to Rathe that gives a weapon dominate, making some of Dorinthea's hit effects like Steelblade Supremacy extra threatening.

When two great heroes clash, victory usually comes by the smallest of margins. And then there's Rout, demolishing defensive plans, and particularly devastating when combined with the dominating effect of Ironsong Determination.