Animation by Christoffel. Illus. by Othon Nikolaidis
About Learn

Briar is a Warden of the Rosetta, an Order of powerful spell weavers that once stood alongside the likes of the Ollin and the Seers.

Towards the end of the Third Age, the Rosetta suffered heavy casualties at the hands of the Old Ones. When all hope seemed lost, their Queen cast a reckless spell that turned the tide of battle, igniting the essence of Davnir to preserve their fading spirits. As the dust settled, the Queen woke from her slumber and gathered up the spirits of her people, planting them as seeds so that they may begin their life anew. But like the Queen, they too became trapped within Candlehold, as they became one with the essence of Davnir.

While her brothers and sisters were seeded in friendly pastures, Briar landed amongst the bramble and thorns at the furthest edges of Candlehold. Despite these inhospitable conditions, she stood strong and resilient, and in time she bloomed into a powerful Warden. As Briar came of age, her power became evident to all, for her grove extended out of Candlehold and connected with the rest of Aria; she alone could break the grip of Davnir's mighty essence, and escape into the outside world.

Though her brothers and sisters had become content within their slice of paradise, Briar was filled with a desire to spread her roots far and wide. She would be the first of the Rosetta to set foot outside Candlehold since the time of the Ancients, bringing with her the tidings of her people, and the start of a brand new adventure.

Runeblades are the only class truly able to wield equal parts magic and might. Split arcane and melee damage types allow Briar to attack from multiple angles, preying on whatever vulnerabilities the enemy may have. Include a mix of attack action cards and 'non-attack' action cards in your deck to make the most of her Runeblade class type. 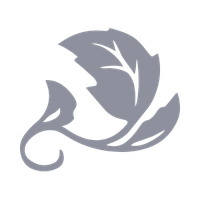 From the Earth we grow, and to the Earth we return, in an endless cycle of renewal that endures all. Briar harnesses both tenets of Earth, but none more so than growth, with her many effects that grow the power and defense of her cards.

Like a stinging nettle, there is more to Briar's thorns than meet the eye. She draws upon the essence of Lightning to strike fast and with shocking intensity. 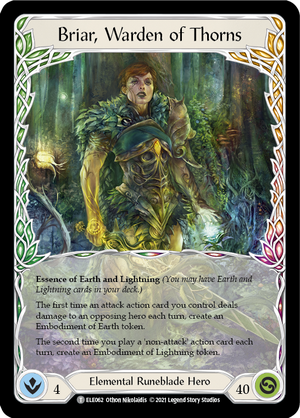 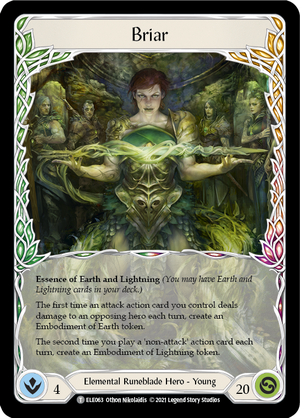 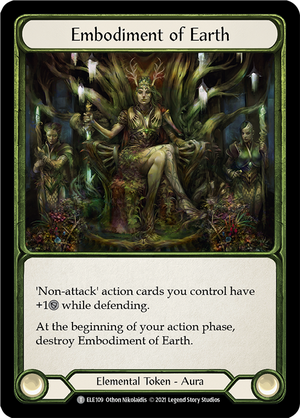 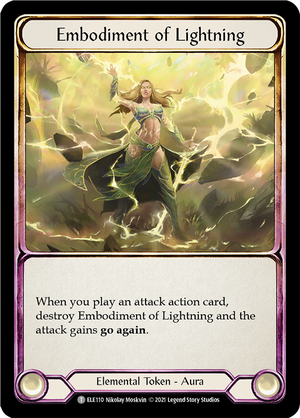 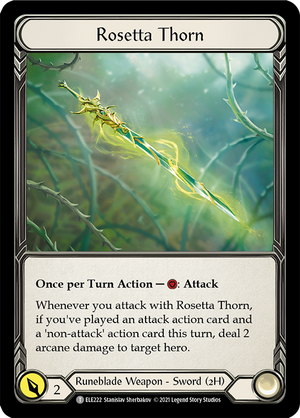 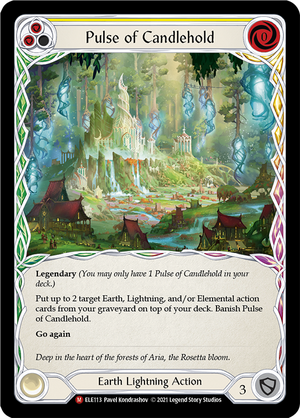 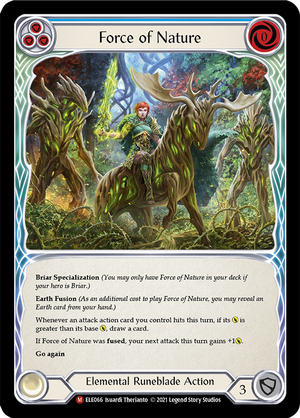 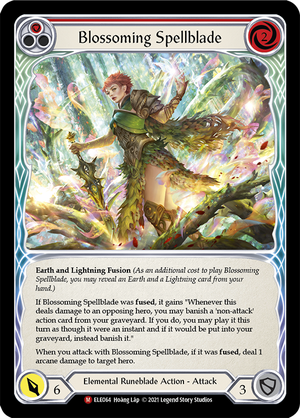 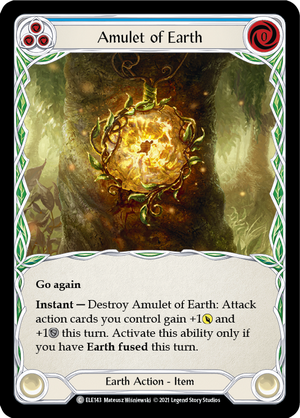 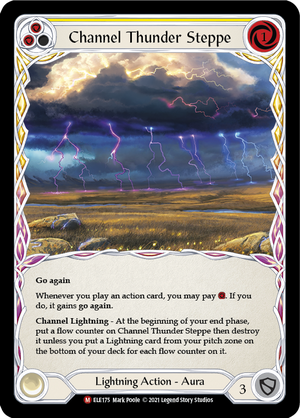 Stomp them with the power of Earth? Dazzle them with a flash of Lightning? Or mix the elements to create dynamic dual fusion? There are many options to explore in the wild woods of Candlehold.

Grow you defenses and endure when you embody the essence of Earth. Briar can create multiple Embodiment of Earth tokens from a single attack, when it deals multiple instances of damage... a specialty of all Runeblades.

Thorns exist to ward away threats. What is this thorn protecting with the sting concealed in its tip?

Candlehold is a unique location within Aria, being the only known convergence point of Earth and Lightning elemental energy. Pulse of Candlehold showcases this by being the only card that is both Earth and Lightning, the perfect card for Briar's fusion cards, including enabling powerful dual fusion cards like Blossoming Spellblade with a single card.

Briar unleashes her full power when she stirs the wildwood to fight at her side.

See the seeds buried within your graveyard blossom to life with Briar's powerful dual fuse, dual damage attack. When fused, the effect of Blossoming Spellblade triggers for each instance of damage it does. Look to pair with Bramble Spark and Shock Charmers for a bountiful harvest!

It is said the Gaia seed itself is buried within this amulet of Candlehold, waiting to blossom when the elements fuse once more.

Draw from deep within the Flow of Aria to channel the pure Lightning elemental energy of Thunder Steppe, and turn up the tempo in the arena. Like a bolt out of the blue, Channel Thunder Steppe brings new energy to some old favourites, like Tome of Fyendal, that have big payoffs with go again.