Briar has clearly been the best deck in Classic Constructed since her release, winning 63% of the Living Legends points from National Champs season. While new strategies emerged over the course of the competitive season that can compete with and beat Briar, such as Oldhim control, ice Lexi, and Kano, it has become apparent that how the Briar hero card functions along with her prevalence at events of all levels, is proving negative to the overall enjoyment of playing Flesh and Blood.

Today's announcement aims to improve play experience as well as rebalance the format.

Functional errata to address balance or game experience is a tool we intend to use only in rare circumstances. Typically if a card was deemed problematic enough to warrant errata of this nature, it would simply be banned. We don't view banning hero cards as a credible option, which is why the Briar hero card is receiving functional errata for the good of the game.

The design intent for the Briar hero card was to make 'non-attack' action cards that defend for 2 more playable, by enabling them to defend for 3. The way Briar ended up being printed, 2D cards frequently defend for 4 or 5, leading to a meta-game that has invalidated nearly every other deck based on attacking.

Flesh and Blood is designed on the premise that standalone 4D cards are primarily defense reactions, such as Sink Below and Fate Foreseen. The real cost of playing these cards is they offer no utility. They only do one thing other than pitch; they defend for 4.

This important dynamic, the trade-off of utility vs 4D+, is broken by Briar's Embodiment of Earth ability being able to trigger multiple times per turn. It effectively creates modal cards that can defend for 4+ or can be played offensively, meaning a defending Briar player can always choose the line of play that profits them the most.

For heroes based on attacking, Briar consistently creates a "damned if you do, damned if you don't" game experience. If you don't defend her attacks, she stacks up Embodiment of Earth tokens that enable her defending hand to trade favorably. If you do defend her attacks to prevent Embodiments of Earth from accumulating, you have few cards left to mount a counter attack. It's in this second example that the "modal" nature of design flaw is most apparent; the same cards that could have defended for 4+ also allow Briar to leverage every tempo advantage she gains, creating a vicious loop that is not fun to play against for most heroes.

Internal development was aware of Briar's play patterns but not to the extent that has been magnified by the gameplay observed in communities and large scale events around the world. We are always looking at ways to improve how we create cards, especially our heroes, and lessons have been learned with Briar in how far we can push the envelope.

Effective immediately, both adult and young versions of Briar are receiving functional errata so her ability that creates Embodiment of Earth tokens will trigger only once per turn. This errata is applicable to all formats of Flesh and Blood, including sealed deck and booster draft. 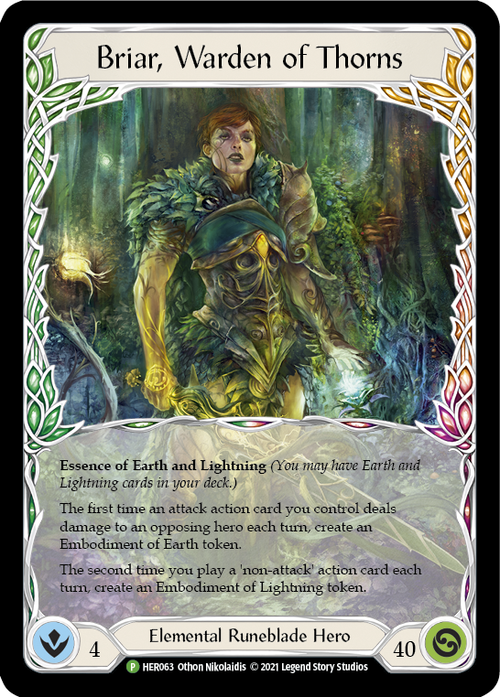 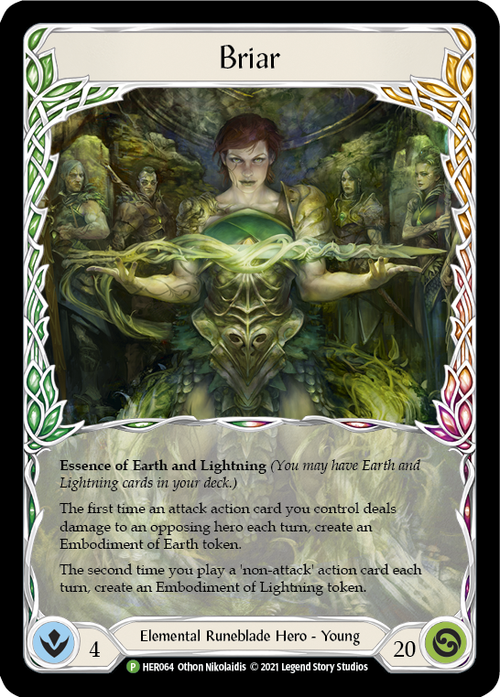 The updated version of the Briar hero cards will be available in the near future.

This announcement is bringing forward the Banned and Restricted Announcement scheduled for February 2, 2022. The reason that date was chosen was to allow for the conclusion of the Tales of Aria competitive season that was affected by covid postponements to the Australian and New Zealand National Championships. We have decided to instead bring the announcement forward and exempt the Australian and New Zealand National Championship main event and last chance qualifiers (but not side events) from the errata and bans announced today.

Plunder Run - It is normal for 6 to 9 copies of Plunder Run to be included in Briar and Chane decks. While drawing multiples of this card is clunky, and it takes a full turn cycle to set it up for maximum impact, this card is often the lynchpin of the spikiest turns that are often irrecoverable from. The release of both Lightning Press and Spellbound Creepers has added additional potency to an already pushed card effect. Of concern even more so than the power level of this card, is the play experience it creates. Plunder Run frequently makes hand evaluation default to "defend with my entire hand and hope for the best". We believe this play pattern that occurs multiple times per game due to the prevalence of Plunder Run, is not aligned with positive play experience.

Post errata and bans, we expect Briar to continue to be a competitive deck, that is also enjoyable to play against.

Duskblade - Overall the Blitz meta-game is in a good place based on win rates from Skirmish season 3. Despite this, we have heard feedback from store managers and players across the world that Duskblade is simply an unfun card, with common sentiment being that it creates a very one-dimensional game experience of "playing vs Duskblade" rather than "playing Flesh and Blood". Duskblade was on the watchlist following its ban in Classic Constructed and is now being added to the Blitz ban list in order to promote positive play experience.

The next scheduled banned and restricted announcement is April 5, 2022.