Finally, we come to the first Calling event in Asia, hosted by Fayble at the Taichung World Trade Center. The weekend featured not one, but two Battle Hardened events, with a total of 12 PTI's on offer across the three events.

The festivities began with the first Battle Hardened event on Friday, featuring the Classic Constructed format. 59 players participated for their shot at the finals, where both players would earn a PTI. Bravo, Star of the Show was an expected star in the Top 8 of this event, with four "Starvo" players making it into the quarterfinals, alongside two Prism and two Viserai players. However, when the finals came down to a match between Bravo player Wei-Chung Hsu and Prism player Wen Jin Hsu, Wen Jin claimed the title of Champion with the Sculptor of Arc Light.

Wen Jin began playing Flesh and Blood at an Arcane Rising prerelease in March 2020, but didn't play a second event until October 2021. He participated at several Skirmish events during Season 4, but this event marks his first competitive Flesh and Blood event. Congratulations to our first Battle Hardened Champion of the weekend!

On Saturday, 142 players gathered for the main event, including a Prism cosplayer, who made her appearance complete with a tome of Light to reference in her battles.

Prism Cosplayer at the Calling: Taiwan

Sunday opened on the Day Two cut of the Calling, and while players fought for their spot in the Top 8, the second Battle Hardened event of the weekend was underway, this time featuring the Blitz format. 42 players competed for their spot in the Top 8, which came down to a fight between Limbo on Viserai, and Rueylin Jou on Kano. Limbo was the first Flesh and Blood player in Taiwan, and was the Taiwan National Champion in 2021, going on to take the finals at this event and become our second Battle Hardened Champion in Taiwan.

Only one player remained undefeated at the end of day one: Sheng-Xun Luo on Bravo, Star of the Show. Sheng-Xun shot into the Top 8 cut on day two in a field of Star(vo)s, with one sole Viserai player to cut through the Guardian's spotlight. Sheng-Xun has been playing Flesh and Blood since May 2021, competing at Road to Nationals events and at the National Championship in Taiwan, where he ultimately missed out on the Top 8 cut.

Fellow Guardian Zhang Yongzhao began playing with the release of Arcane Rising and made Top 4 at the 2021 Taiwan National Championship with Rhinar, Reckless Rampage. He also made the Top 8 of the first Battle Hardened event of the weekend! Liao Yu Fan first joined a Flesh and Blood event in July 2020, taking a short break after the 2020 Taiwan National Championship, regained momentum ahead of competing in the 2021 Championship, and has since maintained a steady stream of events.

Our sole Viserai in the Top 8 is Ming Chen, who began playing in December 2020. He competed at the 2021 National Championship and accompanying "classic" Pro Quest event, and has been present throughout all four seasons of Skirmish events, as well as the first ProQuest season earlier this year.

You may note that there are seven names listed above, and that the name of the second finalist for this event has been omitted from the final list. The unfortunate reality is that in the final match of the Calling, a player was caught cheating. You can read the final statement on his disqualification below, but the penalty committee's decision included not awarding him second place at this tournament.

We would, however, like to spotlight the remaining seven players, including our final Calling: Taiwan Champion, Sheng-Xun Luo. Congratulations on the historic achievement of becoming Taiwan's first Calling Champion!

Our first stop for this recap takes us to Spain, where Azkaban Juegos hosted Battle Hardened: Madrid at the stunning Villamadrid Hotel. Azkaban Juegos has long been hosting Flesh and Blood events, participating in Skirmish events since our first season, and also hosted the Spanish National Championship last year.

64 players gathered for this Classic Constructed event, where star performer Bravo, Star of the Show shared the metagame stage with Viserai and Prism. Breakout stars included one appearance each from Briar, Oldhim and Dorinthea; Briar and Oldhim yielding ground to their fellow Runeblades and Guardians, respectively, while Dorinthea remained the lone Warrior of the tournament. 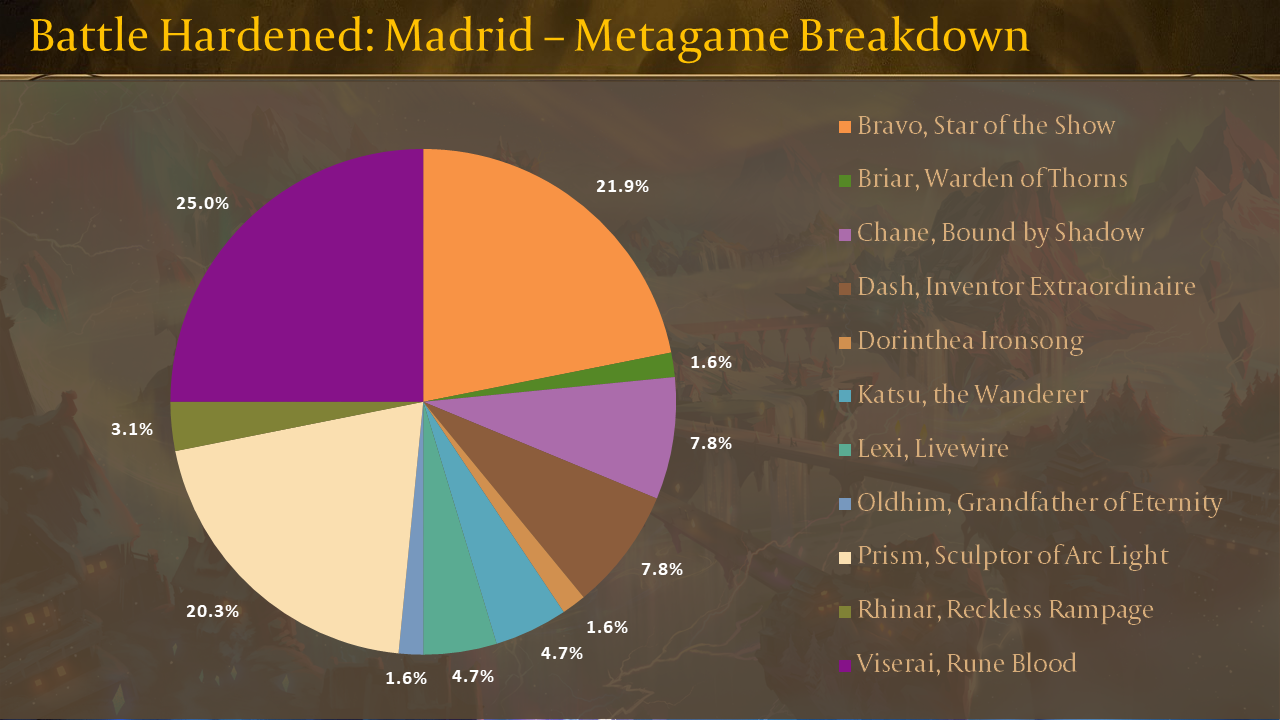 Despite his strong presence in the metagame, only one Viserai, Rune Blood player proceeded to the Top 8 cut. Adrián Ruiz Yague has been playing since November 2020, participating in every season of Skirmish to date, the ProQuest season earlier this year, and made the Top 8 at the Spain National Championship with fellow Runeblade Briar, Warden of Thorns.

The trio of Prism, Sculptor of Arc Light players in the Top 8 are Sergio Sanz Guerrero, Vicent Vilar i Cifre, and Carlos Carrero. Sergio has been playing since January 2021, participating in a handful of Skirmish events prior to entering the National Championship. He blazed through the ProQuest season this year, joining five different events and winning one with Prism. Vicent joined his first local Flesh and Blood event in September, then immediately entered into a Road to Nationals event later that day. In November, he competed in the National Championship and has been participating in several events per week in the months since, ramping up his skills with Skirmish, Armory, and On Demand events. Carlos Carrero began playing even later, joining his first Armory event in October. After competing in a couple of ProQuest events, he traveled to Indianapolis to compete at the Calling and Battle Hardened tournaments.

Finally, we have the four Bravo, Star of the Show players in the Top 8. Jose Vicente Rodriguez Palazon signed up in October, and Battle Hardened: Madrid marks his first high-level tournament. Nuno Amaral is from Portugal, and started playing Flesh and Blood with his first Armory event in December last year. Alvaro Francisco Toledano Benito had been playing for four and a half months before making the Top 4 at the Spain National Championship, with Battle Hardened Madrid making his first major competitive tournament in the months since. Alejandro Silva Moro played in a handful of events after joining a Tales of Aria pre-release last year, playing one ProQuest event and a slew of Armorys before joining this Battle Hardened as his first high-level tournament. 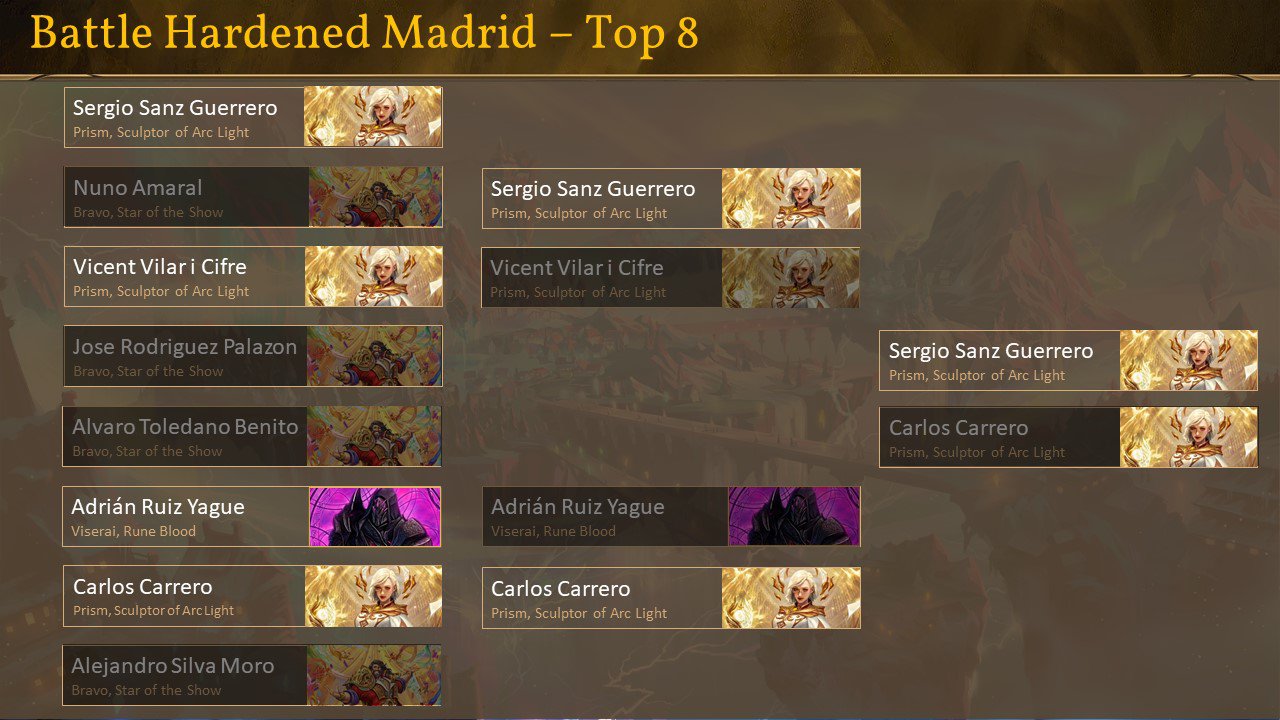 All four Bravo players were knocked out in the quarterfinals, leaving one Runeblade and three Illusionists to battle it out for their spot in the finals. Both of the Top 8 finalists from the Spain National Championship were eliminated from the player pool, until finally the last two players remained: Sergio Sanz Guerrero and Carlos Carrero. Both players missed out on Top 8 cuts at previous high-level tournaments, and at this event, both made great strides by cutting through to the finals with Prism, Sculptor of Arc Light. 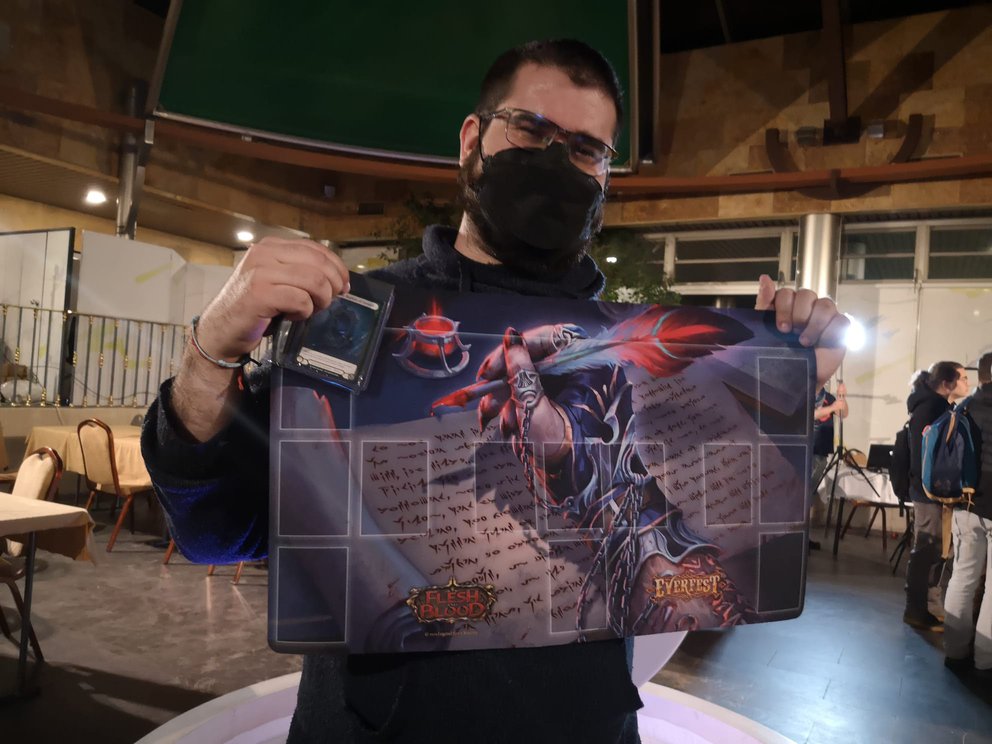 The team at Azkaban Juegos also wanted to extend their thanks to a member of the community, Juan Monzon, who opted to help with the stream instead of playing in the event, despite traveling 300km each way to make it to the venue in Madrid. Thank you, Juan, for all your hard work on the steam, including cameras, caster's equipment, and cabling.

You can view the stream of the Battle Hardened event via Azkaban Juegos' Twitch channel.

The Gin and Tunic Team in Madrid

Next, we turn to Germany, where the team from Spielviel / Yoda's Data hosted a Battle Hardened event at the Idstein Cultural Centre. 68 players competed in this Blitz format event, one of the last in Flesh and Blood to include Viserai pre-Living Legends status.

The Top 8 cut at this event saw two Oldhim and three Viserai players, but also an Iyslander, a Dash, and a Rhinar. Our Brute representative of the Top 8 is player Sasha Bachhausen, who has been competing in Flesh and Blood events since February 2021. He competed at the German National Championship later that year, and participated in a handful of Skirmish events before arriving in Frankfurt for his second high-level tournament.

Iyslander player Christopher Bizau has been competing in events since Skirmish season one, winning a Road to Nationals event in Switzerland with Ser Boltyn, Breaker of Dawn. Meanwhile, our lone Dash in the Top 8 is Philipp Kresse, playing since June last year. He competed at the German National Championship but fell just shy of the Top 8 cut.

Oldhim player Ricardo Manrique is new to the game, joining in January this year, competing in weekly Armory events and one ProQuest tournament before joining players in Frankfurt for his first competitive Flesh and Blood tournament. Fellow Guardian Nino Zimmermann has also been playing since January, participating in four ProQuest events and four Skirmish events before competing at the Calling: Krakow with Oldhim.

Finally, we have the three Viserai players: Patrick Hauser, Maximilian Klein, and Joshua Bausch. Patrick Hauser had been playing for three months when he attended the German National Championship, and made the Top 8 at the Pro Quest side event. Maximilian Klein made the finals of the German National Championship with Lexi, and won a Skirmish event with Rhinar earlier this year.

Joshua Bausch began with a Welcome Deck event in October 2020, but started playing regularly alongside friend Christian Hauck in August 2021. They qualified for the National Championship together just ten days out from the end of the XP qualification period, and Joshua came just shy of the Top 8 cut, while Christian Hauck went on to become the first German National Champion. Joshua made his return to high-level competitive play with the Calling: Krakow, where he once again came just short of the Top 8. 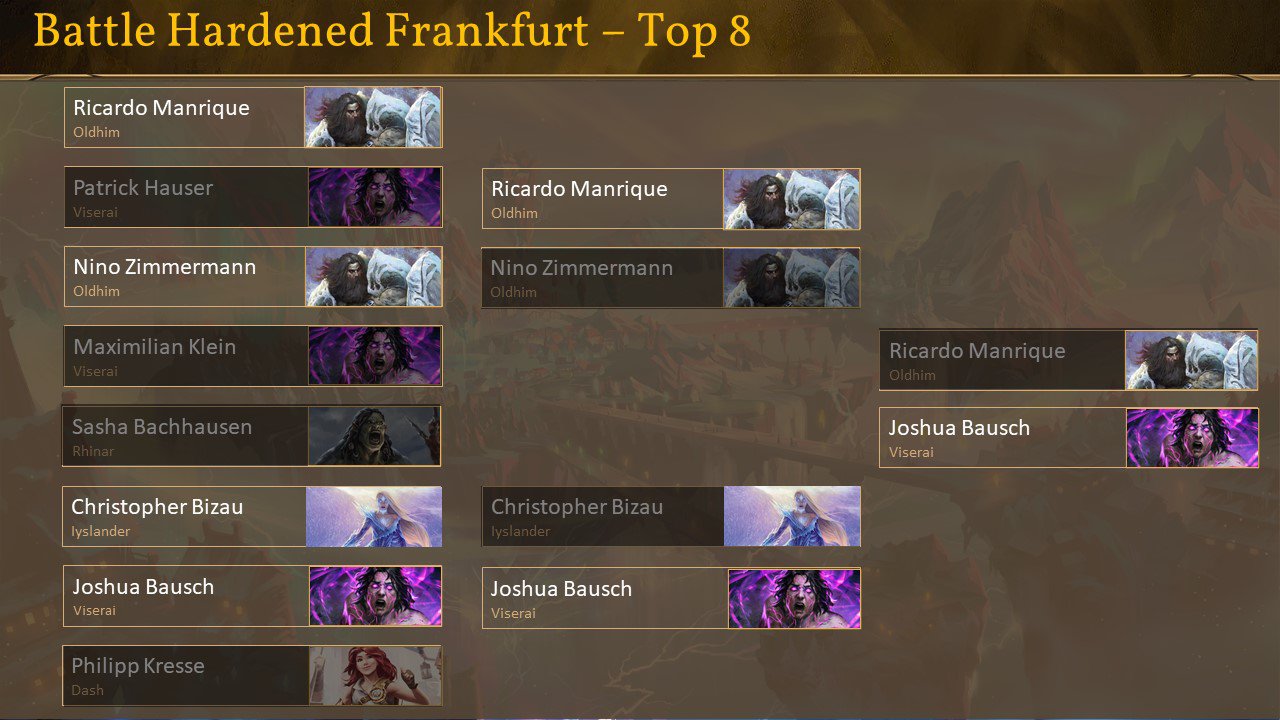 Rhinar and Dash were both eliminated in the quarterfinals, and Iyslander bowed out in the semifinals, leaving Ricardo Manrique with Oldhim and Joshua Bausch with Viserai to fight for the title of Champion. Congratulations to Joshua Bausch for being one of the final players to make Viserai a Living Legend, and for his triumphant path to Champion after strong finishes at both previous high-level tournaments.

During the final round of the Taiwan Calling 2022, between Li Hong Yeh and Sheng Xun Luo, the player Li Hong Yeh was disqualified for cheating. The infraction involved the following; Sheng Xun Luo hit Li Hong Yeh with Oaken Old and chose two of three random cards from their hand to send to the bottom of their deck. Li Hong Yeh then looked at the 2 selected cards and swapped one of those cards with the remaining card in their hand, before putting them to the bottom of the deck. The video evidence, judge testimony, and confession of Li Hong Yeh have given sufficient evidence that this was a clear case of cheating as a deliberate violation of the game rules.

Li Hong Yeh has now been suspended from official competitive tournament play (tier 2 and above) for 2 years (until the 24th April 2024) but will still be able to compete in tier 1 tournaments. It is important to note that Li Hong Yeh has not been permanently banned from official tournament play and they will eventually be allowed to rejoin the competitive community. As such, the suspension given by LSS seeks a balance between punishing them for their actions and providing space for their rehabilitation, allowing them to continue to engage with their community in a local capacity (subject to TOs permission). However, if Li Hong Yeh should appear before the penalty committee again for an incident that brings tournament integrity into disrepute, their suspension may be lengthened or upgraded to a permanent ban.

The 2nd place prizes of the Gold Cold Foil Legendary card and PTI will not be awarded to any other player, but the cash prize will be split evenly among the seven other players in the top 8 cut.