As we near the end of March, the competitive scene for Classic Constructed is continuing to ramp up. Over the weekend, the first Calling event of the year saw over 450 players competing in the event, the Calling showcased decks built, rebuilt, and honed to a fine edge from a season of ProQuest events. Looking ahead to New Jersey, the Calling is our first look at what the metagame for our inaugural Pro Tour might look like. Star City Games also hosted a Battle Hardened event in Indianapolis, one more opportunity for players to gain a PTI and pilot their decks ahead of the Pro Tour. 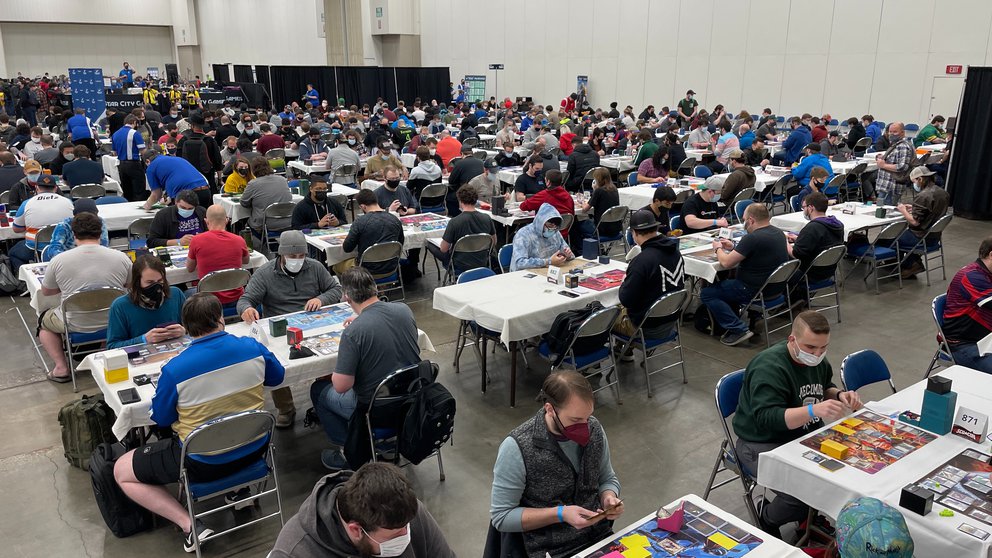 The weekend opened with a Team Blitz Beatdown on Friday night, giving players a chance to warm up and enjoy games with friends ahead of the Calling opening on Saturday morning. Joshua Lau, Alex Sneed, and Nathan Crawford teamed up to take on the competition on Dorinthea, Viserai, and Kassai, respectively. Nathan and Alex both went 5-1 by the end of the battle, while Joshua went undefeated with a perfect 6-0 record. Nathan Crawford had a strong showing at the US National Championship but ultimately missed the Top 8 cut, while Joshua Lau made the Top 8 of the ProQuest in Dallas Fort-Worth, and the Top 32 cut at the Calling: Cincinnati.

Alex Sneed, meanwhile, went on to compete in the Battle Hardened event on Sunday. Over three hundred players battled it out for one of two PTIs available at the event, and their share of a US$2,000 cash prize pool.

Five players in the Top 8 had yet to compete in a high-level Flesh and Blood tournament before Indianapolis. Matthew Dilks and Robert Greeson both competed in the first season of ProQuest events to develop their skills, joining their first Flesh and Blood event in February and January of this year, respectively. Travis McDaniel signed up in November last year, with only Armory and On Demand events under his belt before the tournament, as did Patrick Yoder, who began playing in February. Finally, Jesse Kennon competed in the third season of Skirmish events late last year.

Alex Sneed has been playing since the first season of Skirmish events in February 2021, and played at the Calling and ProQuest in Las Vegas, the Calling Dallas Fort-Worth, the US National Championship, and the ProQuest that ran alongside it in Orlando.

Lucas Oswald, meanwhile, competed at the Calling in Orlando, and at fifteen years old, is the youngest person to reach the Top 8 of any competitive Flesh and Blood event of this kind. 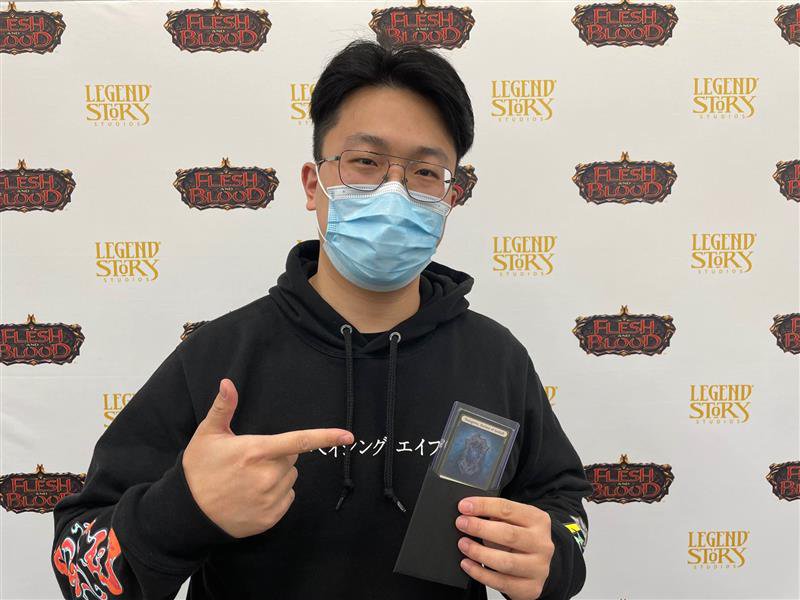 Finally, we have Yongji Yang, who signed up for his first event at a Tales of Aria prerelease in September. He played at the Calling Cincinnati, the ProQuest Orlando, and made the top 32 at the Calling Dallas Fort-Worth. He has played consistently throughout the third season of Skirmish events as well as the first season of ProQuest last month, and competed at the Battle Hardened event in Philadelphia.

Congratulations to all the Top 8 players at this event, which marks a major milestone in the Flesh and Blood journey of each and every one. 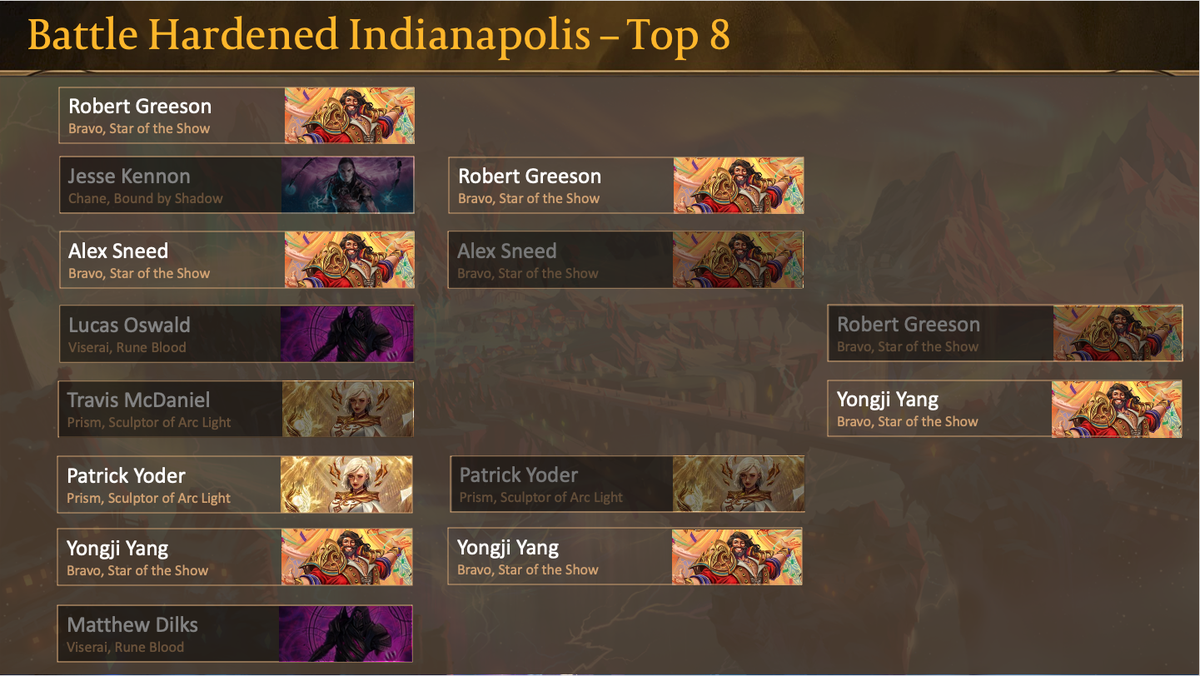 Yet before the Battle Hardened began, the Calling Indianapolis kickstarted the weekend with a bang. By far the largest event of 2022 to date, it sets a precedent for the rest of the year to follow. Some of Flesh and Blood's most well-known names joined newcomers to the game, ushering in a metagame that has been developing over the past months. 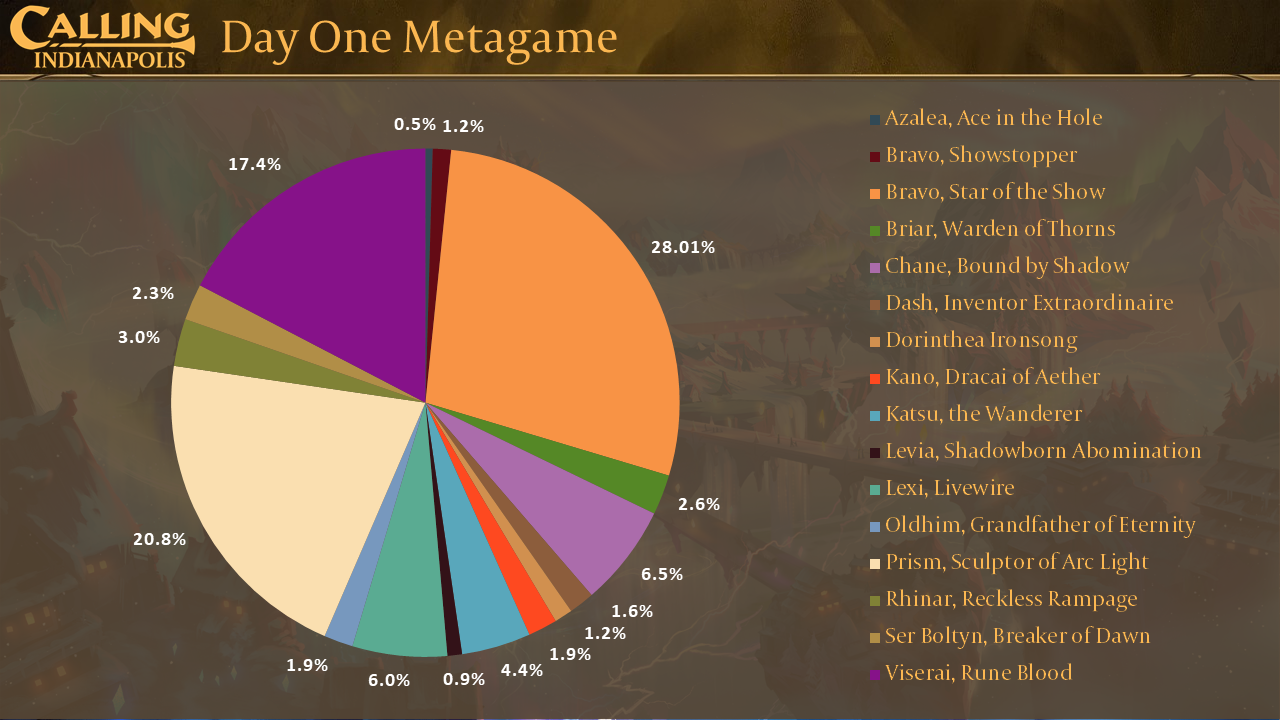 Every single (adult) hero in the world of Rathe was represented, from brute to runeblade, and ranger to illusionist. Bravo, Star of the Show once again took to the stage, known to players worldwide as Starvo, Bravatar, Brostar, E-Bravo, and Captain Planet, to list just a few of his nicknames. In the day one metagame, he was counterbalanced by the presence of Prism, an illusionist who might just be able to put on an even bigger performance.

Viserai followed close behind, mirroring his presence during the ProQuest season. The runeblade has been enjoying a renaissance since his initial appearance in Arcane Rising, overtaking both Chane and Briar in the metagame. 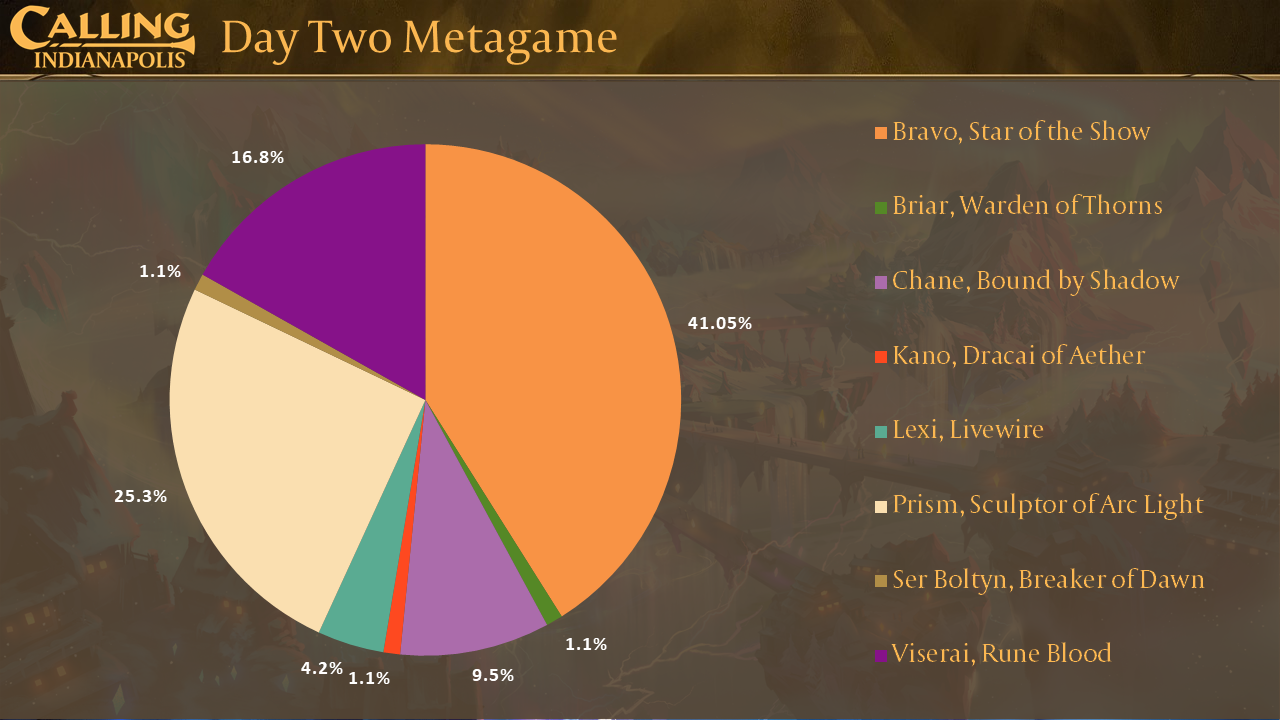 Bravo, Prism, and Viserai remain the three strongest presences after the day two cut, followed by Chane. Despite the older Runeblade comprising a smaller slice of the overall metagame, he saw a comparatively larger number of players making the cut than his more popular counterpart. We also see four Lexi players, joined by one each of Briar, Kano, and Boltyn.

The day two cut also included players like Clarence Dews, who had only played in four Flesh and Blood events before the Calling, or Dyllon Dietz, who has amassed over 1,000 XP over the past year of events, including participating in the US National Championship, Calling, and ProQuest event in the one weekend in Orlando.

Justin Graham is our lone Kano player on the second day of the Calling, playing Flesh and Blood since his first event in December 2020. This is his third major competitive event, having previously played at the Calling Las Vegas and the National Championship. Joshua Lau, who went 6-0 at the Blitz Team Beatdown, joins the players on day two with Boltyn.

Then there is Sam Dando, the only Briar player in the day two cut, one of just eleven at a tournament with over 400 players, and the first of our Top 8 players for the Calling Indianapolis. He previously made the day two cut at the National Championship, qualifying through an XP-based invitation earned in several short, intense months of events. 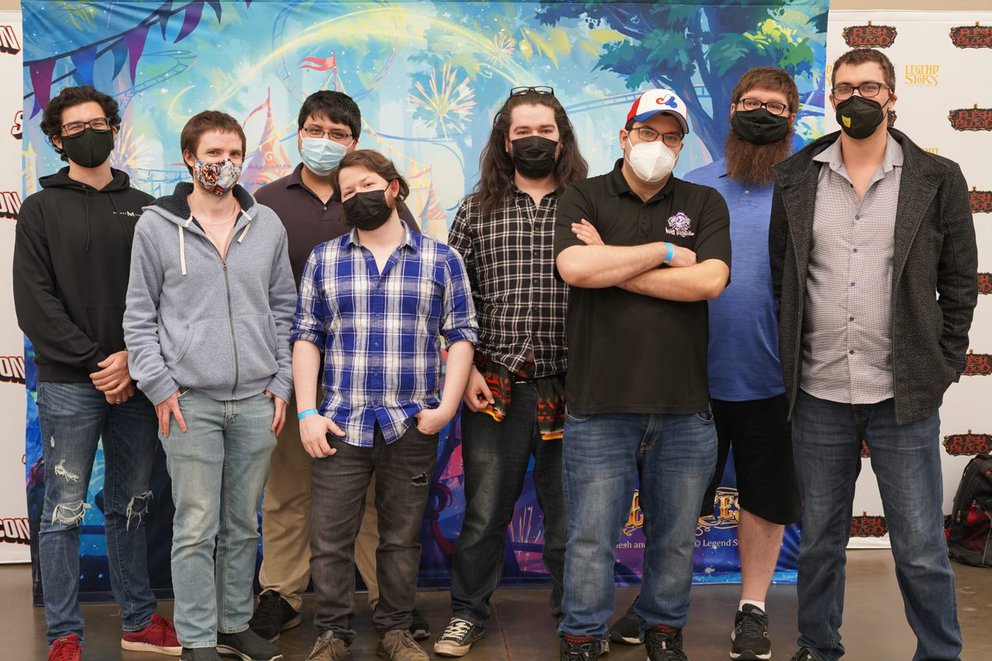 Our other non-American player in the Top 8, David Rood, runs weekly Armory events at the Hairy Tarantula in Canada, and won the ProQuest event that ran alongside the Canadian National Championship.

Michael Hamilton was in the Top 4 at the Calling Cincinnati, and went on to win the Calling Orlando two weeks later with his Oldhim deck. Jacob Baugh competed at the Calling Las Vegas and the Calling Dallas Fort-Worth before getting into the Top 8 at the US National Championship.

Finally, there is Pat Eshghy, who played one event in October before he competed at the Calling Cincinnati and made the Top 32 cut. He went on to place in the Top 4 at Battle Hardened Philadelphia earlier this year. 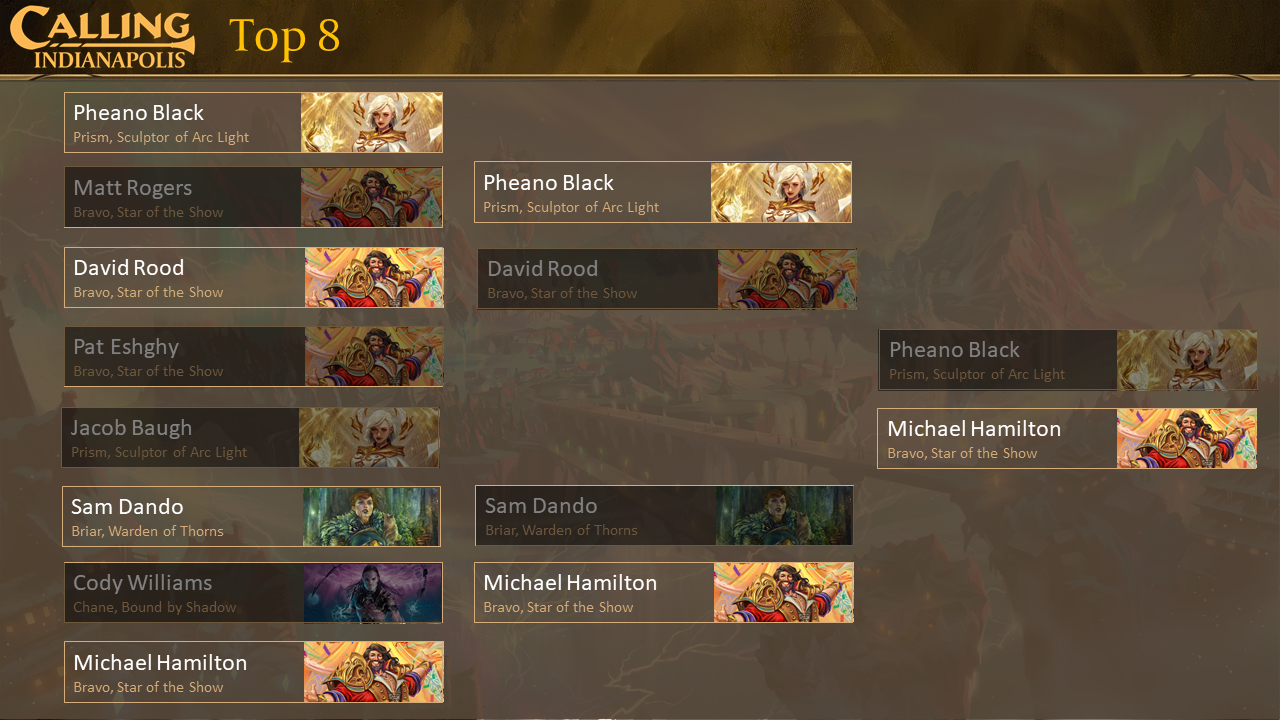 Chane player Cody Williams was defeated in the quarterfinals, alongside Jacob Baugh's Prism. Matt Rogers and Pat Eshghy were both knocked out of the running, which left two Bravo, Stars of the Show to battle it out against remaining Prism player Pheano Black, and Sam Dando as our lone Briar.

While Briar was felled by Michael Hamilton in the semifinals, so was David Rood's Bravo, leaving one Prism and one Bravo in the final match of the tournament; a fitting end for two of the largest stars of the ProQuest season.

Michael Hamilton's experience as a Guardian player was in full display during the final match, having previously won a Calling with Oldhim. He pushed through the final point of damage with Winter's Wail to become the second two-time Calling Champion in Flesh and Blood history, achieving the feat two years after Sasha Markovic set the record by winning the Calling $10k Auckland in 2020. 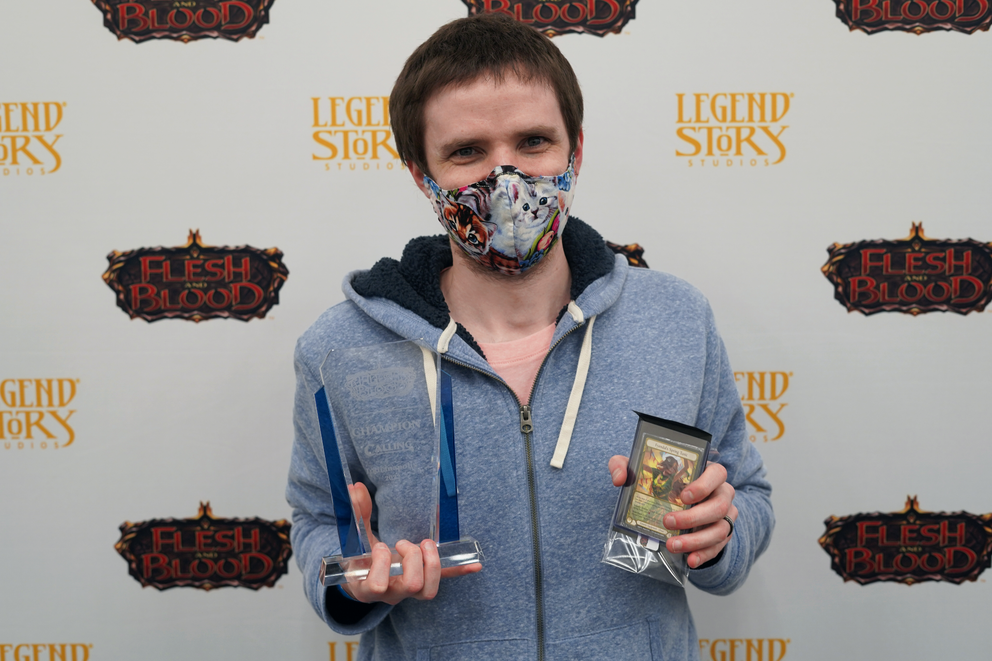 Meanwhile, in the United Kingdom, Living Realms was preparing to host the first competitive Blitz events of 2022. They hosted the UK National Championship last year, and once again, the Royal Armories Museum in Leeds served as the venue for battle.

The weekend opened on Saturday with the world premiere of Skirmish season four, with some incredible prizes on offer. Several exclusive playmats were ready to be awarded to players, including two People's Champion playmats. One of these was awarded to the owner of a Fyendal's Spring Tunic (and a wig). 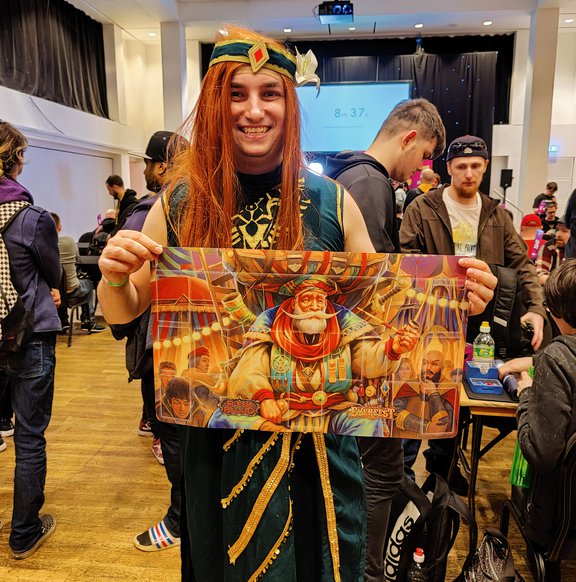 The first Skirmish event of the year saw Kassai step into the foreground for the first time to date, comprising over 20% of the metagame. Viserai was close behind, mirroring his popularity at Classic Constructed events thus far this year. 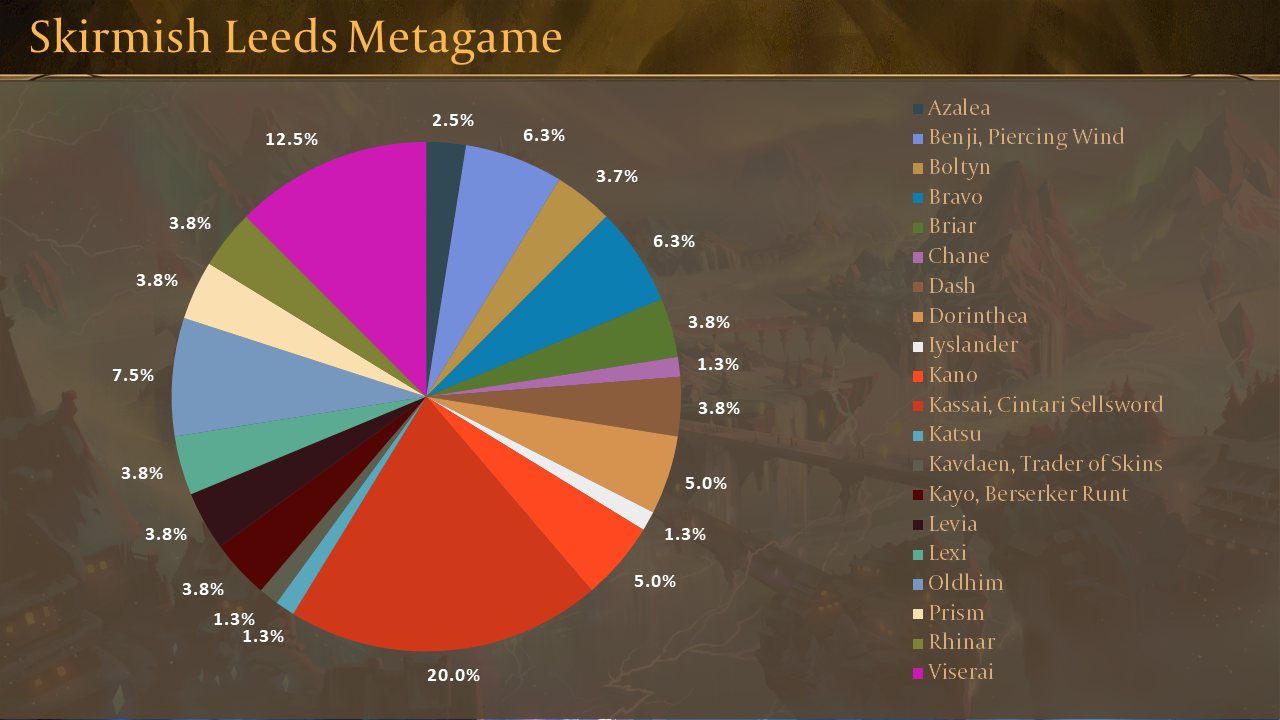 Viserai reigned supreme in the Top 8, resulting in a mirror match between Jamie Faulkner and Mike Kerslake. Our final winner of the day, Jamie Faulkner, first started playing in November last year, winning his first event at Dark Sphere during the ProQuest season. 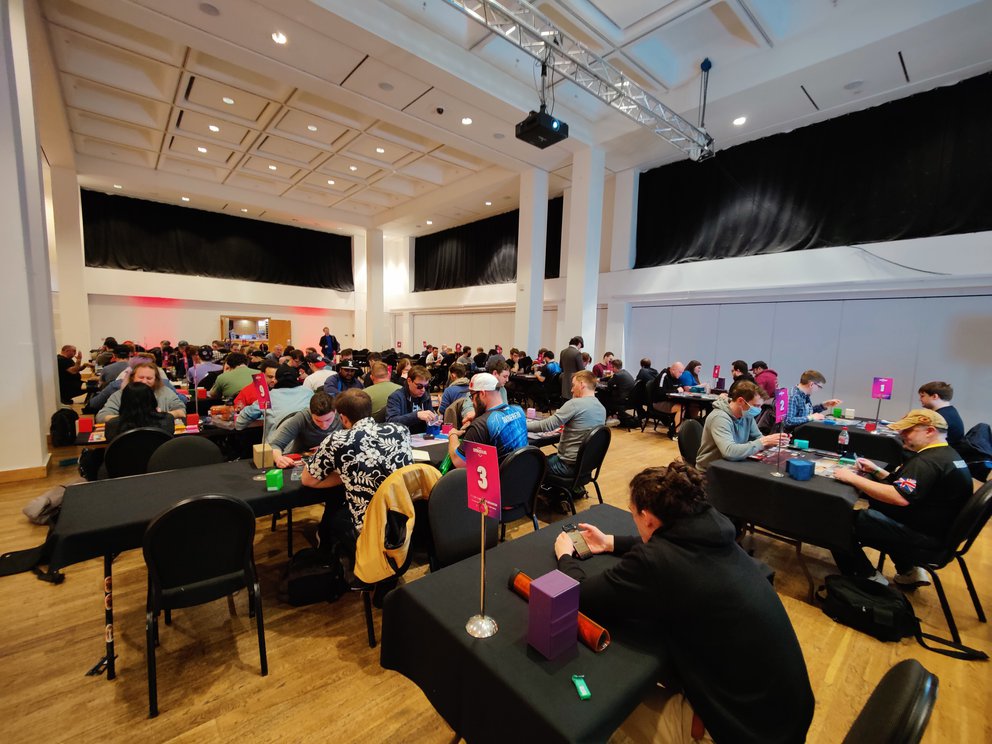 On Sunday morning, the Battle Hardened event began in earnest with 97 players, and a slight shift in the metagame soon became apparent. The number of Viserai players present was slightly higher, and while several represented heroes vanished from the metagame, Iyslander remained on the field, and was joined by a Shiyana player. 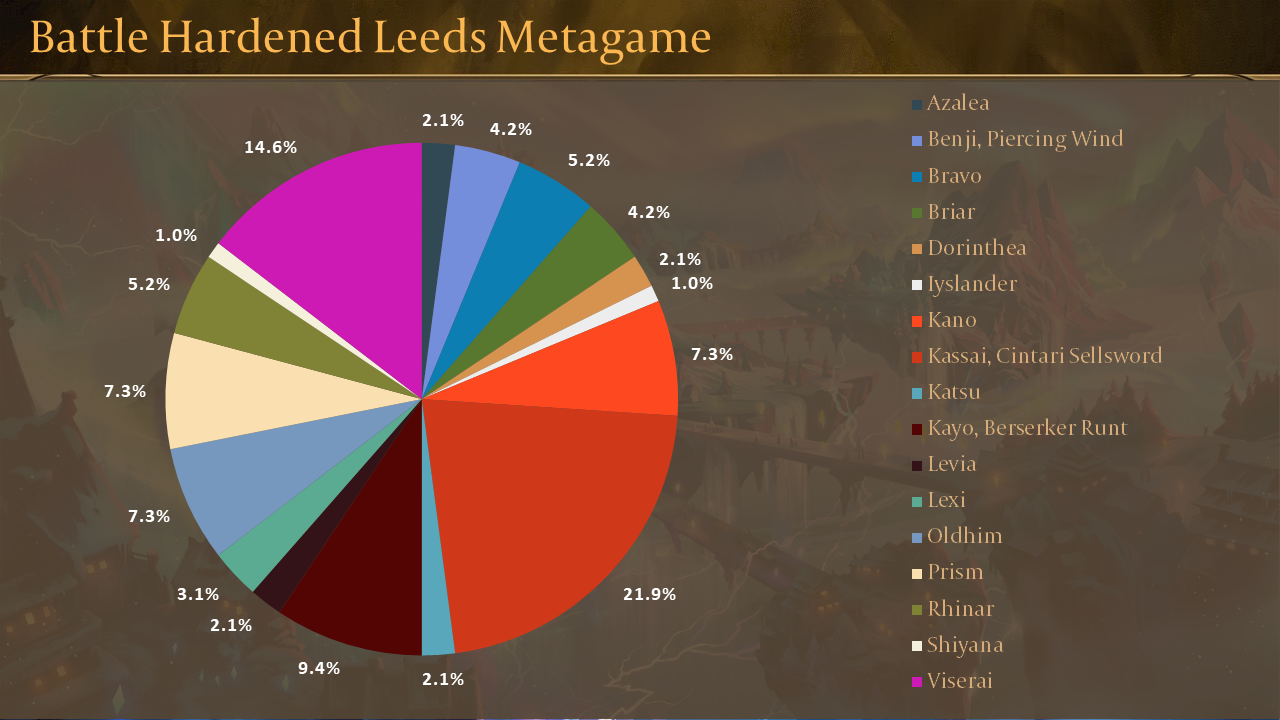 Peter Ward, the sole Kassai player in the Top 8, is an extremely notable case in that he has only ever played one other Flesh and Blood event - the Skirmish tournament that took place the day prior. In one weekend, Peter launched himself straight into the Top 8 of his second-ever event.

David Calf began playing in November, testing his skills during the ProQuest season, while Sébastien Guilbaud first started playing during the first Skirmish season in February 2021, and competed at the UK National Championship.

Scott Mines has been playing Armory events weekly since July 2021, and this marks his first major event, having previously competed in exactly one Skirmish and one ProQuest event. Francesco Giorgio played his first event in January this year, entering the ProQuest season and making the Top 4 of two events. 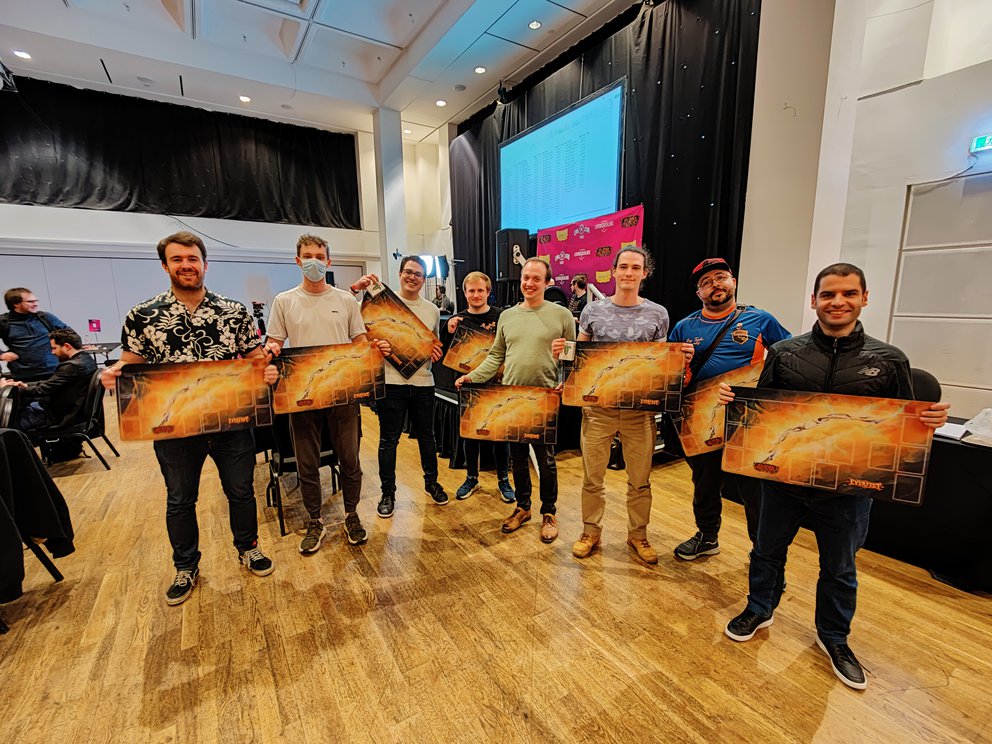 The quarterfinal rounds saw both National Champions advance, as did the two newest competitive players in the Top 8. UK National Champion Matthew Foulkes was matched against Peter Ward, who'd only played his first event the day prior, while Danish National Champion Jonas Benzarti battled it out against Francesco Giorgio.

The sole Kassai of the Top 8 was knocked in the semifinals, as was National Champion and Viserai player Jonas, which left Matthew Foulkes facing off against Francesco Giorgio.

Matthew Foulkes has plenty of experience with runeblade decks after competing with Briar the previous year, while Francesco piloted Bravo, Star of the Show at ProQuest events through February and March. While both were playing a different hero, they brought their knowledge of the class to the table in a fight for the title of champion. 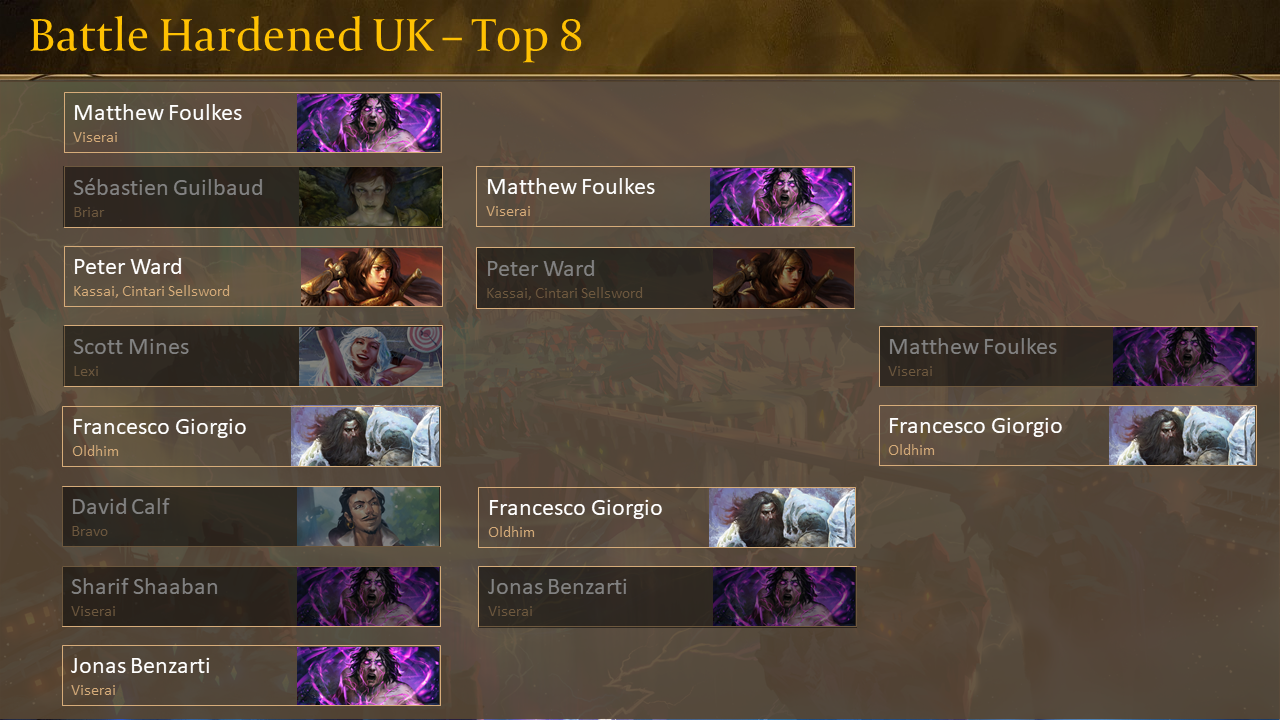 In the final match of the event, Francesco's Oldhim defeated Matthew's Viserai, claiming the title of Champion and a Gold Cold Foil Legendary card. 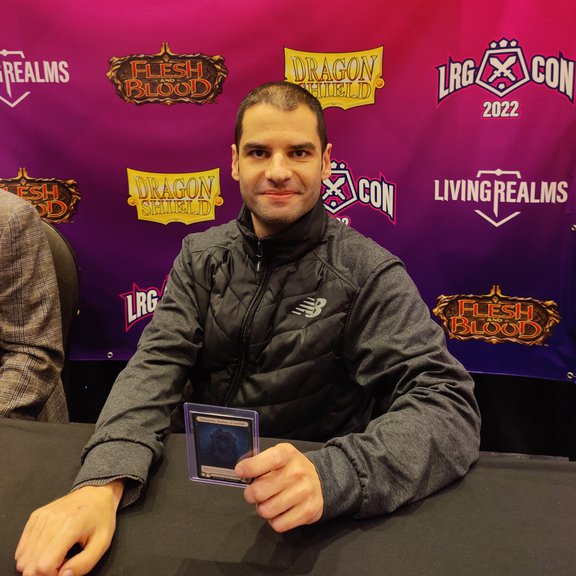