We're happy to welcome onboard Br33zy (Parker Brown) as a guest writer to cover Pro Quest Season 3! Parker has all the latest on how the meta game is shaping up as players take a shot at winning spot at Pro Tour Baltimore.

Hello friends, it’s Parker here! While some of you may know me on Twitter as Br33zy, many of you may be thinking, “who is this fella and what does he know about metagame analysis?” Well, thankfully I’ve been given the facts straight from the source so you need not worry about any speculative information or biased opinions here. As much as I’d love to tell you “Viserai is the best!” I’ll do that on my own time and let the data speak for itself over the course of our three weeks together.

I’d like to preface by saying that the meta statistics we will look at together are slightly approximate due to some stores providing incomplete information, or only presenting data from the winning hero. That said, 115 local game stores across 32 countries have reported a staggering 4000+ player turnout for our first week of ProQuest. Please take into account that many die hard competitors may have played in multiple events this weekend, so the true number of “individual players” may be slightly less.

First, let’s explore the overall spread of heroes that were represented by so many of you this weekend! 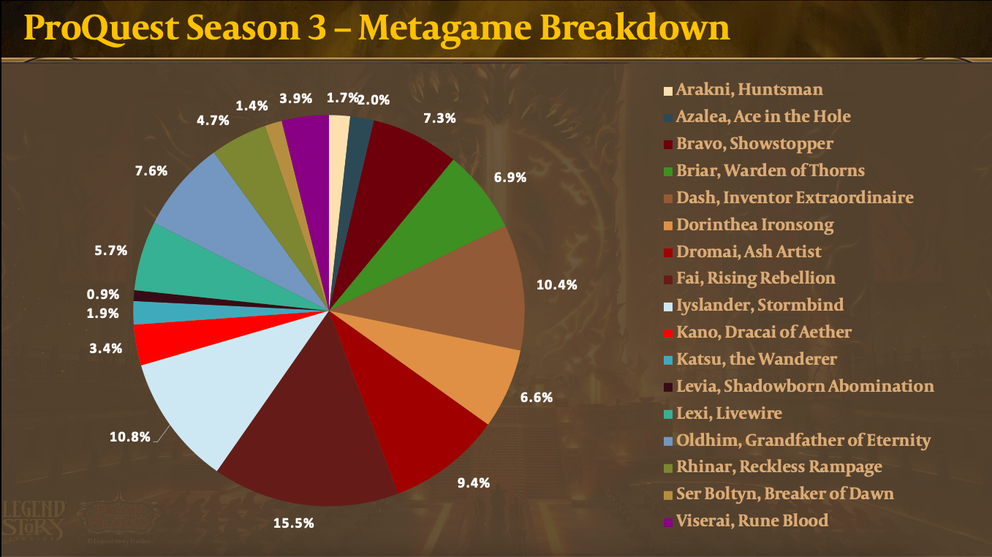 As you can see, we have such an incredibly diverse and widespread representation of Rathe residents. While I can’t dive into each hero specifically, let’s take a closer look at the heroes that splashed double digit percentages last week.

This may not come as a surprise to most, but we can see that our newest Draconic Ninja, Fai, Rising Rebellion, consumes 15% of the entire metagame. Next, we have another Uprising all-star, Isylander, Stormbind, which represented 11% of the field. Not far behind, we have the tech-savvy mastermind herself, Dash, Inventor Extraordinaire, claiming 10.75% of the battlefield for herself.

Before we move on to showcase our Top 8 placings, I want to tip my hat to the 20 brave souls who juggled blood debt with Levia, Shadowborn Abomination, racking up 0.86% of the overall meta. That is what you call passion. 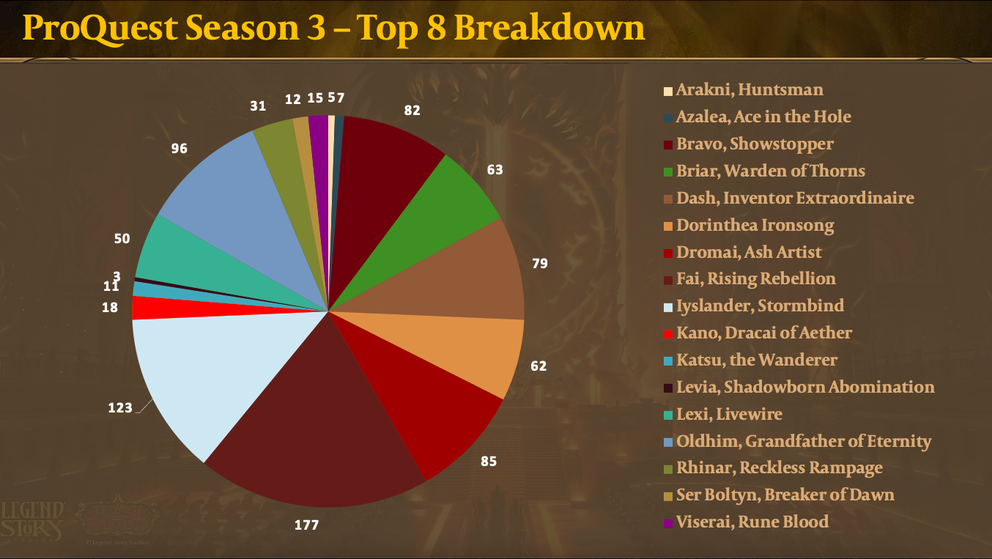 I’ve chosen to showcase this information in actual quantity of Top 8’s rather than a percentage so that it’s more digestible and to be able to show you just how diverse the current meta is. Before I say more, I’ll ask everyone to take a moment and scroll back up to the overall hero metagame chart.

The two charts here are almost identical because there truly is no “one hero to rule them all”. This data represents passion, determination and commitment to the heroes that you love. Those three aspects of the game, aspects that I truly believe to be the foundation of Flesh and Blood’s fandom, are enough to net many players a Top 8 placement in today’s metagame. Now, let’s get into some really fun and interesting data.

After detailing three of the highest percentages of the overall hero representation, one might predict those same three heroes to have the largest showing in the Top 8. While Fai made up 19% of Top 8’s and Iyslander claimed 14% of Top 8’s, Oldhim tells a different tale. Only represented by 7% of the overall field, Oldhim consumes 10% of the overall Top 8 standings. Lastly, our dragon-commanding Illusionist, Domai, Ash Artist, made quite the showing in our data this season as she wedged herself into 9% of Top 8 placements, showcasing that the Illusionist class still proves to be a force not to be discounted.

Now, the moment you’ve all been waiting for: Week 1 Proquest Wins. 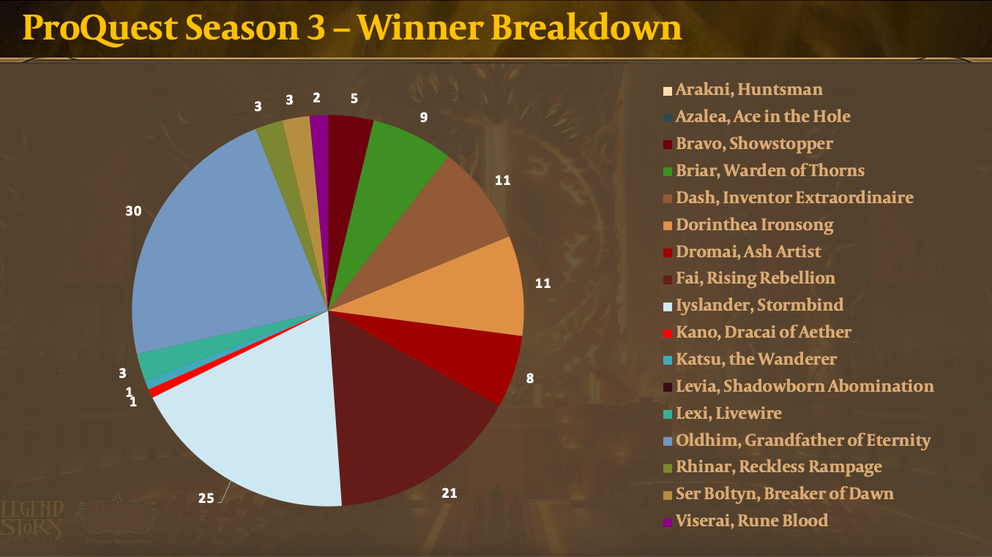 During week 1 of ProQuest Season 2, Bravo, Star of the Show, claimed nearly 50% of the wins. I apologize if I’ve triggered some less than fruitful memories at the mere mention of his name, but it’s important to note just how far we’ve come. While the data shows a few dominating forces, many aspects of our meta are quite balanced. Let’s address the heroes with the most wins and a few honorable mentions.

Oldhim, Grandfather of Eternity placed 6th when it comes to field representation, placed 3rd in Top 8 standings and 1st in claiming the most victories at 23%. Further solidifying his place in the meta since his release in Tales of Aria. Iyslander, Stormbind comes in with a close second at 19% of overall wins during week one. A hero that can play on your turn, disrupt your strategy with Frostbites, arcane damage, and massive 7+ physical attacks is sure to to be expected for the remainder of ProQuest season and beyond. Fai, Raising Rebellion checks in with the third most wins last week, representing 17% of wins. With the largest representation across the field and an onslaught of breakpoint attack damage at his disposal, Fai reminds us all that his rage knows no bounds.

Honorable mentions go to Kano, Dracai of Aether and Katsu, the Wanderer. Both non-talented heroes have been considered by some to be less diverse than their talented counterparts, but there were few that set out to prove otherwise. 76 Kano players rode into their ProQuest last week and 1 stood among them as the victor. Similarly, 45 Katsu fanatics sliced their way through the weekend and one of them walked away as champion. 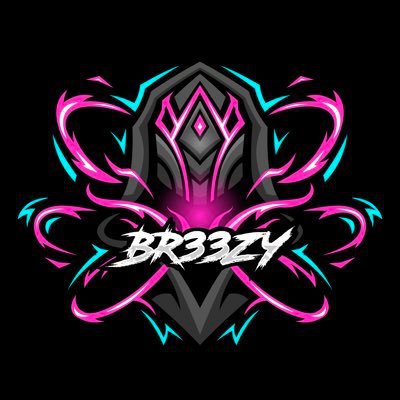 While it remains to be seen how the metagame will unfold as we lead into Outsiders, it is worth noting that there is hope for all. Though some heroes may be represented in larger numbers, many new players and veterans alike are free to explore their favorite heroes abilities without feeling the pressures of playing outside of their strengths. Something to be encouraged by is the fact that many lesser-played heroes, such as Azalea and Levia, have managed to topple the masses and solidify themselves into the Top 8. It’s clear that there may be obstacles on your path such as Oldhim’s capacity to pivot from brick house to pummel-hungry fury, Iyslander’s ability to tell your “go-again” to “think-again”, and Fai’s seemingly unstoppable force, but nothing is defined as of yet. So how do you prepare for week two of ProQuest? Expect them all, they are ready and waiting.

If you’d like to explore some of the ProQuest and Battle Hardened winning deck lists and a brief recap of last week's tournaments, check them out here. Be sure to tune in next week as I breakdown week two of ProQuest Season 3.

Parker Brown is a Flesh and Blood player, and an author of content relating to Flesh and Blood. The opinions expressed in the above article are his own and do not necessarily reflect the views of Legend Story Studios.