Today, we’re putting the spotlight on Jacob Pearson: winner of The Calling Auckland 2021, top eight finalist in the Calling Auckland and NZ Nationals 2020, winner of the first Road to Nationals event in New Zealand, and top eight finalist in five other Road to Nationals events. He’s currently at the top of the ELO leaderboard, and seventh on the lifetime XP board. Calum Gittins and I sat down with him to discuss his path to becoming a Calling Champion, and his journey in the realm of Flesh and Blood. 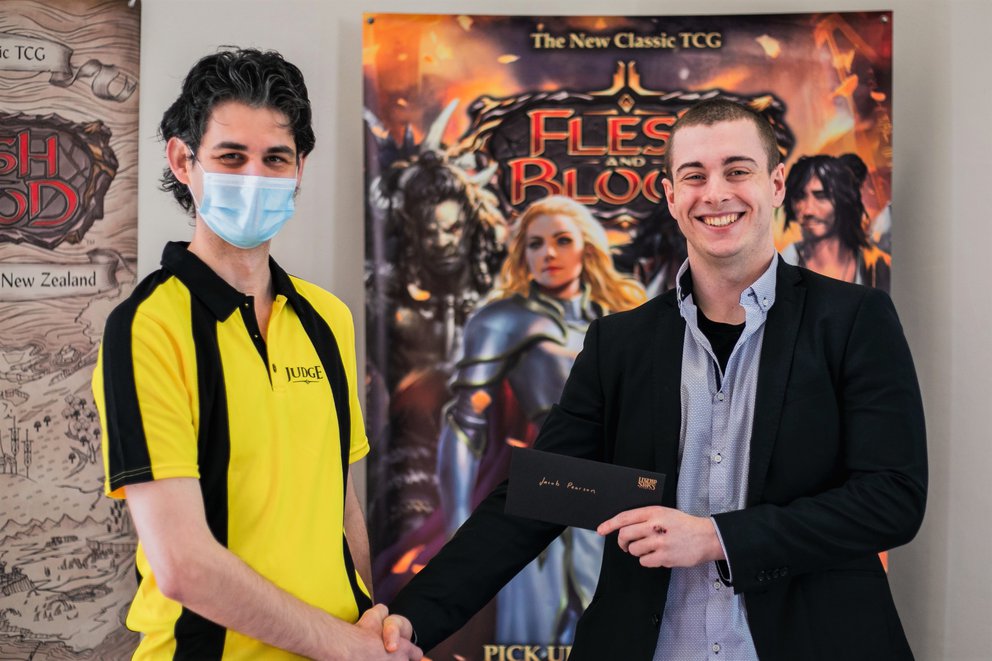 Dressed in a suit, sans tie, Jacob appears nonchalant about his path to victory, laughing when we start to discuss how he was introduced to Flesh and Blood.

“Uh, actually, selling my [card] collection?” He says, talking about going into Card Merchant to sell some of his cards. There, Matt Rogers, “the classic, the man himself - he thought it would be a good idea for me to try this new game called Flesh and Blood.” Both of them knew people who were involved in its creation and development, most notably James White. “So I was like, why not? I’ll sit down and I’ll learn to play… uh, and about thirty minutes later, I’d bought ten cases of Welcome to Rathe.”

Calum, sitting beside me, interjects at this point. “You played for an hour, and you bought ten cases?” In response, Jacob laughs.

“Which I then cracked there on the spot, yeah… I opened them all.” He tells us that he decided, essentially, on the spot to go ‘all-in’, describing how it felt to play the game for the first time.

“Something- I don’t know, something just clicked in my brain. Like, all the… basic mechanics just felt very intuitive, it felt- as easy as breathing, for me. Coming from a background of [playing] a lot of trading card games, I’ve probably played at least ten competitively in some sense? And, it just- I don’t know, it felt easy. Like, everything just felt right about the game.”

From there, it didn’t take long for Jacob to decide to play competitively. At his second Armory event, he described being ‘savagely beaten’, and abruptly realising the skill gap which existed between him and other players. This, for him, was the moment that made him determined to learn more about the game.

“As soon as I saw how much depth the game actually has... I was like, ‘wow, there is actually such a huge skill gap that I just can’t account for, at the moment, and that just made me want to knuckle down and play.” 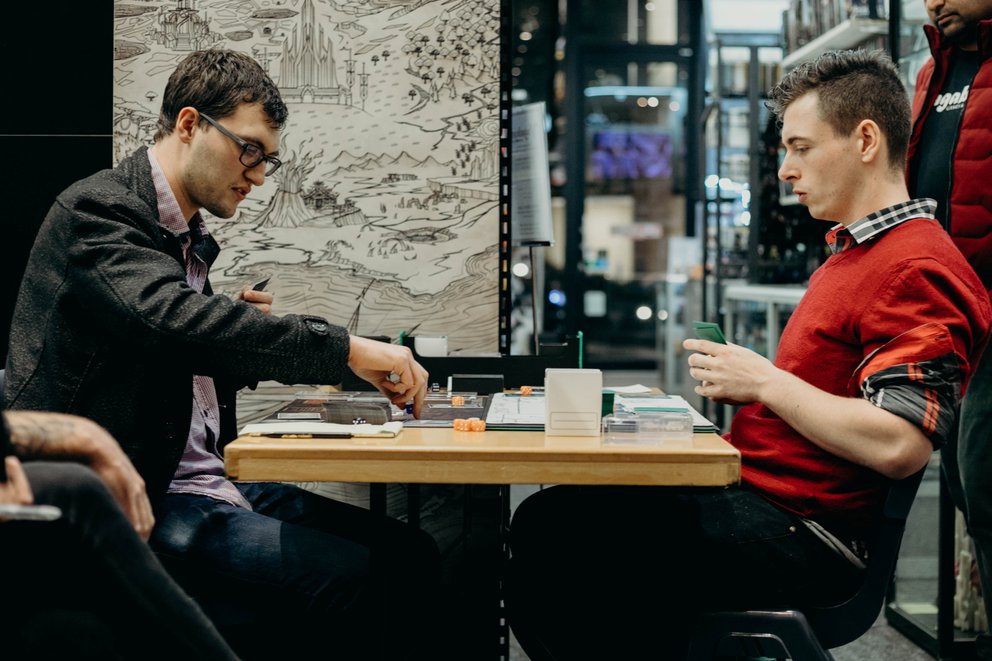 New Zealand’s infamous nationwide lockdown ended up, counterintuitively, providing the perfect opportunity for Jacob to put in the hours he needed to improve his skills. New Zealand was in various ‘levels’ of lockdown from March 23rd to May 13th, at which point non-essential workers were allowed to return to work. In the meantime, the vast majority of the population remained at home.

“I racked up, I think, about 8000 hours… in those first three months.” Here, he mentions some of the online events created and hosted by other FAB players, specifically naming one event series which was co-hosted by the website Metrix Daily and the NZ local game store Card Merchant. “Just playing all the online events, the Dolphin Leagues, getting to meet everyone in the community... and - I started winning.”

Describing the games themselves, Jacob laughs. “I had, like, a 28 game win-streak with my Pummel Runeblade deck; that was extremely spicy.” He did not, unfortunately, provide us with the decklist. “That was...I think, one of the coolest things ever; to have that ability to be creative [with deck-building], and really be able to put my stamp on something and have it work was really, really cool.”

In fact, it was not long after the end of the nationwide lockdown that Jacob wrote an article on this exact subject, which was featured here on the website. If you want to read the article, you can find it here, courtesy of FABDB.

When we move the subject to The Calling 2021, asking what the week leading up to the event looks like for him, he jokes, “if you’re having to do the prep [for an event] a week out, there’s obviously something wrong”.

“At that point I’d already decided my exact 60 card list… for me personally, at that time, I was working very closely with Matt [Rogers] and Card Merchant, and having to set up all the environment for that weekend, [I was] very, very busy.”

In terms of his preparation in the last week of the event, Jacob describes himself as ‘running around like a headless chicken.’ “On the day of the Calling, I think I’d slept for about three or four hours before the event, and that whole week leading up to it, I don’t think was much better.” 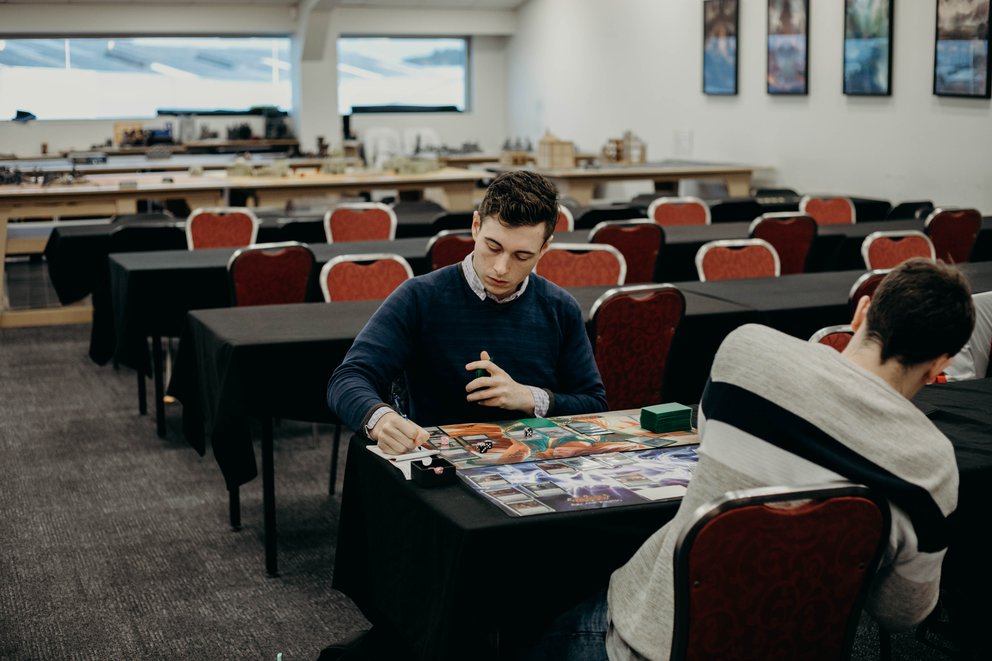 “I was playing four to six hours a night, just going through, making small changes to the deck, playing every matchup we could possibly think of that was relevant, and just slowly working through all the individual card choices… We had a couple of decks lined up…”

On this note, Jacob specifically mentions one of the other decks he’d been testing, and how variance played into his final decision. “The Rhinar OTK Claw-style deck…” We cannot, sadly, provide a decklist for this one either. I believe the most appropriate phrase to use here is ‘a magician never reveals his secrets’.

“I’m a very meticulous person, and introducing random elements into the game plan, that you have to account for every time you want to roll that dice, [to] get those extra action points, is very tilting, after a long play session.”

Jacob says that, ultimately, what made Ira the better option was the concept of tournament fatigue. “The problem we found with a lot of the decks was playing them over a long tournament day… The only deck I could feel comfortable sitting and playing for over four to six [hours], with little to no mental fatigue, was Ira.” 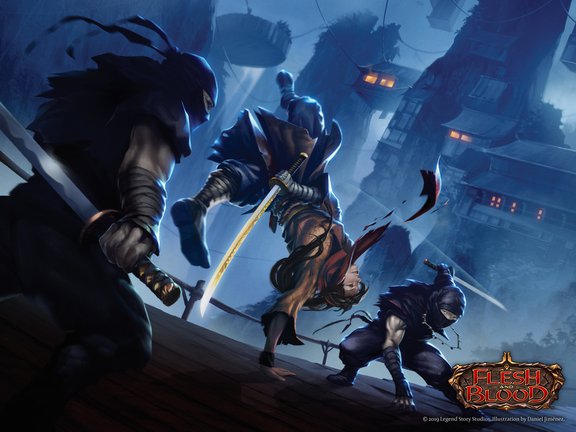 Unless you know a competitive player, or have yourself been involved in a competitive event, you may not realise how long these events can run for. Drawing on my own personal experience, the first Calling event in Auckland in 2019 lasted over twelve hours. The Calling Auckland 2021, the event that Jacob participated in, ran until after midnight.

Some decks may play extremely well in short bursts, but competitive events of this size become more like a marathon - and one thing which every competitive player has to take into account is their own stamina, and how they’ll be managing the deck once they get into their sixth, tenth, or even twelfth hour playing. Particularly if, like Jacob, you’re running on limited sleep. Playing for long periods like this is already a challenge without adding in sleep deprivation.

On the subject of sacrificing his sleep, we decided to ask Jacob what it really takes for someone to reach the competitive level that he plays at - what he sacrificed on his path to becoming Champion of The Calling Auckland 2021.

“Well, I used to be a volunteer teacher at a Kung Fu school - I used to teach a couple of classes a week, I had to cut that to play FAB. I basically ended up having to give up my love of cooking. I couldn’t spend two hours in the kitchen every night because I was spending hours playing FAB. My partner at the time didn’t enjoy the fact that I was concentrating so much on FAB, so I unfortunately had to end a two-and-a-half year relationship, because of that, as well. It takes a lot. There’s a lot of effort that goes into it, a lot of playing, a lot of determination that you have to have in order to want it that much.” 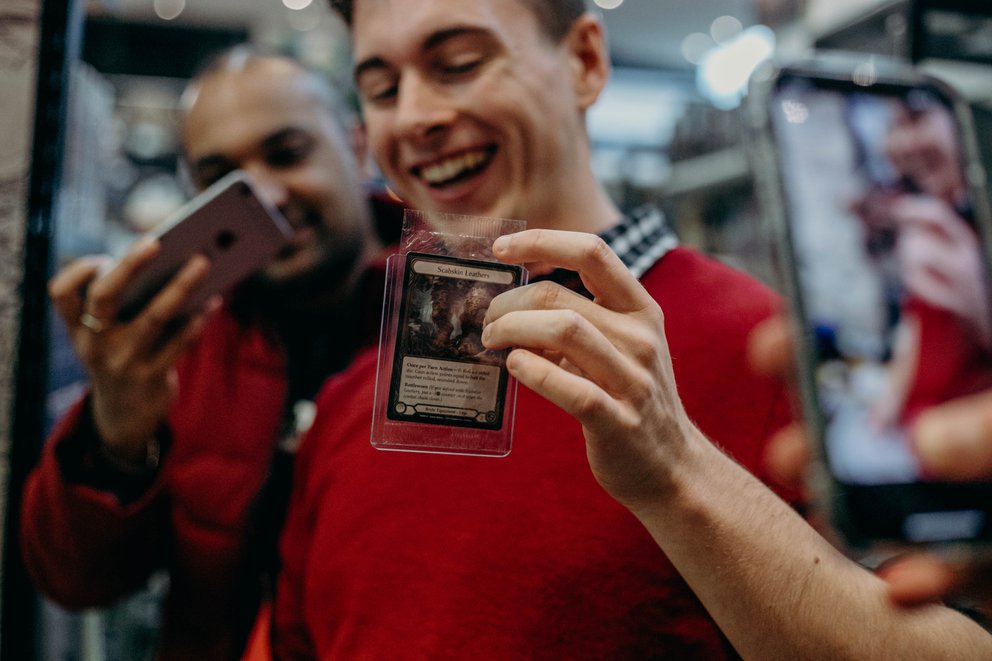 To make his win that much more difficult, in the Top 8 match-ups, Jacob was knocked into the loser’s bracket. For those who aren’t familiar with the scoring system, this meant that Jacob had to win five games in the finals without a single loss in order to take the trophy. With all of this in mind - all the preparation, the sleep deprivation, the personal sacrifice, the struggle, with the odds stacked against him - what did it mean to him, in that moment where he realized that he had won the Calling?

“It was- it was indescribable… I can honestly say that it was the happiest moment of my entire life.”

As Flesh and Blood spreads internationally, and more in-person games become available, we ask Jacob how he’s feeling about the progression of the game overseas.

“I think we can say that New Zealand has some of the best players in the world, but I’m really interested to see how the metas develop overseas, especially, and just get to play against some different people. You get very used to playing against certain playstyles from certain players. Especially - for lack of a better word... the New Zealand scene for Flesh and Blood is very ‘inbred’. There’s a lot of sub-development that happens just because.. the ‘best players’ are playing this deck, and this certain way, so that’s how everyone is… [They] shift to adopt it.”

Our last question for him is on the subject of a World Championship. Once things open up, is it his goal to become the first Flesh and Blood World Champion? 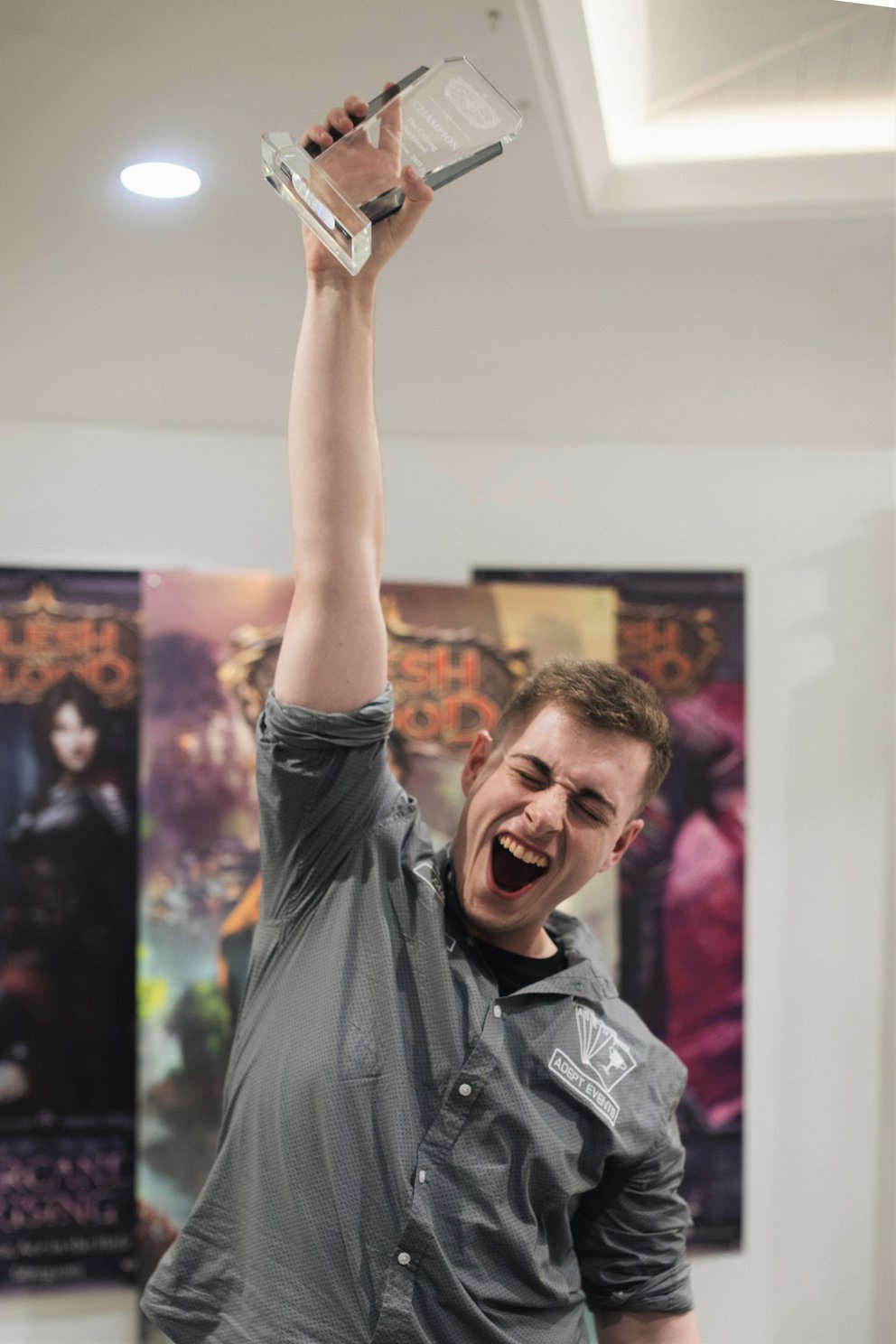 A big thank you to Jesse and Aaron at LikeButterMedia for their photos of the Road to Nationals event.