Oldhim is a mighty Shieldbearer of the Ollin; powerful defenders that stood alongside the Ancients against the Old Ones since the dawn of time. Now, Oldhim must venture into an unfamiliar Aria in search of his old allies, and a way to release his people from their deep slumber within Isenloft. For it's clear to him that his reawakening is just a sign of what is to come; he can feel it within his tired old bones, that soon the Old Ones will rise once again. 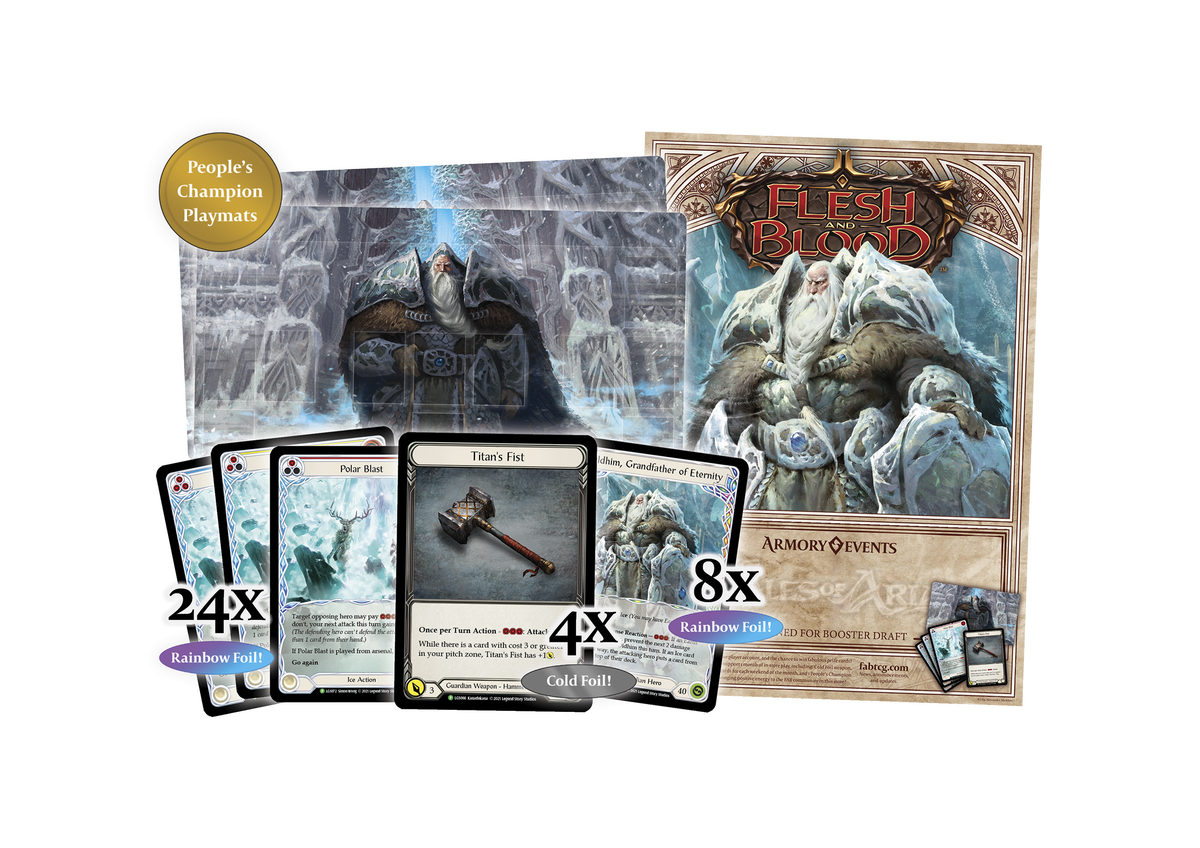 The second Kit of Season 5 of Flesh and Blood Armory kits is a look into the stark and mountainous world of Aria. Armory Kit Oldhim, Grandfather of Eternity features cards from the set; Tales of Aria.

Armory Kits set the theme of prizes for weekly Armory Events at your local game store. Oldhim, Grandfather of Eternity makes his debut, using the Titan's Fist to protect Aria and your Local Games Store from interlopers!

From October 1st, players will have the opportunity of earn a Cold Foil version of Titan's Fist for winning their weekly Armory Event. Players in each Armory Event will also be rewarded for their FAB devotion with a Rainbow Foil Extended Polar Blast for participating and supporting their local community (while stocks last).

For the first time in the September kit, find a Rainbow Foil Oldhim, Grandfather of Eternity Hero cards. These prizes are available as both participation and performance based prizes.

Deserving players from each community will have two chances be awarded a People's Champion playmat, with each kit now featuring two mats featuring the artwork from Oaken Old, being awarded to the players who has contributed the most to their local community throughout that month.

Find an Armory Event Near You!

So, what are you waiting for? Plenty of opponents are waiting on the battlefield with this month's themed Armory Events. Find an Armory Event near you with our Event Locator, and perhaps contact them in the case of in-store play being unavailable to find out about alternatives to participate.

Armory Events are the perfect way to help grow your local community of Flesh and Blood players by offering them a weekly/consistent event to play some games and earn great prizes! By signing up to host Armory Events you will be eligible to receive Armory Kits every month for free!

Sign up to GEM (Game Event Manager) today in order to start your journey in running Armory Events and growing your Flesh and Blood community!

Existing stores should contact their distributor representative on being supplied Armory Kits.

If in-store play is not currently feasible please contact us (op@fabtcg.com) for some tips and advice on how to utilize the contents of each Armory Kit.