Animation by Christoffel, Illus. by Wisnu Tan
About Learn

(Written by Nicola Price, edited by Tarryn Thomas, with illustrations by Iain Miki.)

Levia was born into poverty, her impoverished family one of many who worked for the nobility of the Northern Realms. Her father had been a stablehand for Lord Barthimont, but he disappeared suddenly when Levia was very young, leaving his family destitute. Without the means to support herself and her daughter, Levia’s mother sold them both into the service of the Barthimont estate, an act borne of desperation. 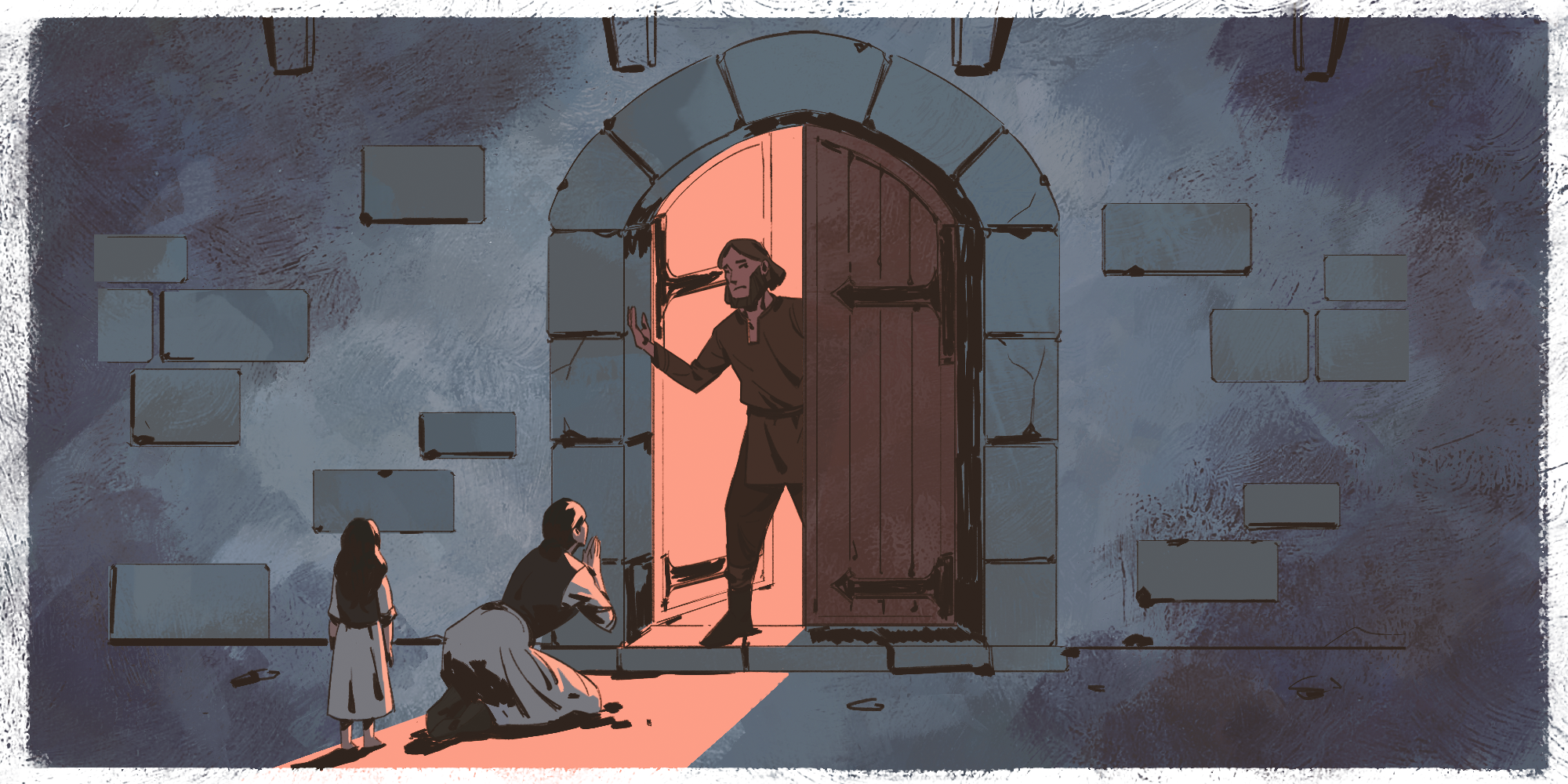 Levia remembered little of her mother, who was forced to spend long hours serving Lady Barthimont. She would leave their shared bed shortly before first light, and would return long after the candles had extinguished themselves. Once, several years after they’d come to live at the estate, Levia’s mother woke her in the early hours of the morning, her face drawn with terror as she begged her daughter not to trust the Barthimonts and to flee their holdings as soon as she had an opportunity to escape.

Several days later her mother vanished, leaving Levia with only that last haunting, cryptic warning. However, she refused to heed her mother’s words. Stubborn, strong-willed, and resolved to uncover the truth, she instead decided to investigate and explore the deepest, darkest corners of the castle.

As Levia grew older and more determined, the Barthimont estate descended ever deeper into madness. The servants fought over scraps of food while the nobles dined on elaborate feasts, Lord Barthimont’s hunting trips took him further and further from his lands, and all the while, Lady Barthimont only seemed to thrive on the bitter emotions which flooded the manor. 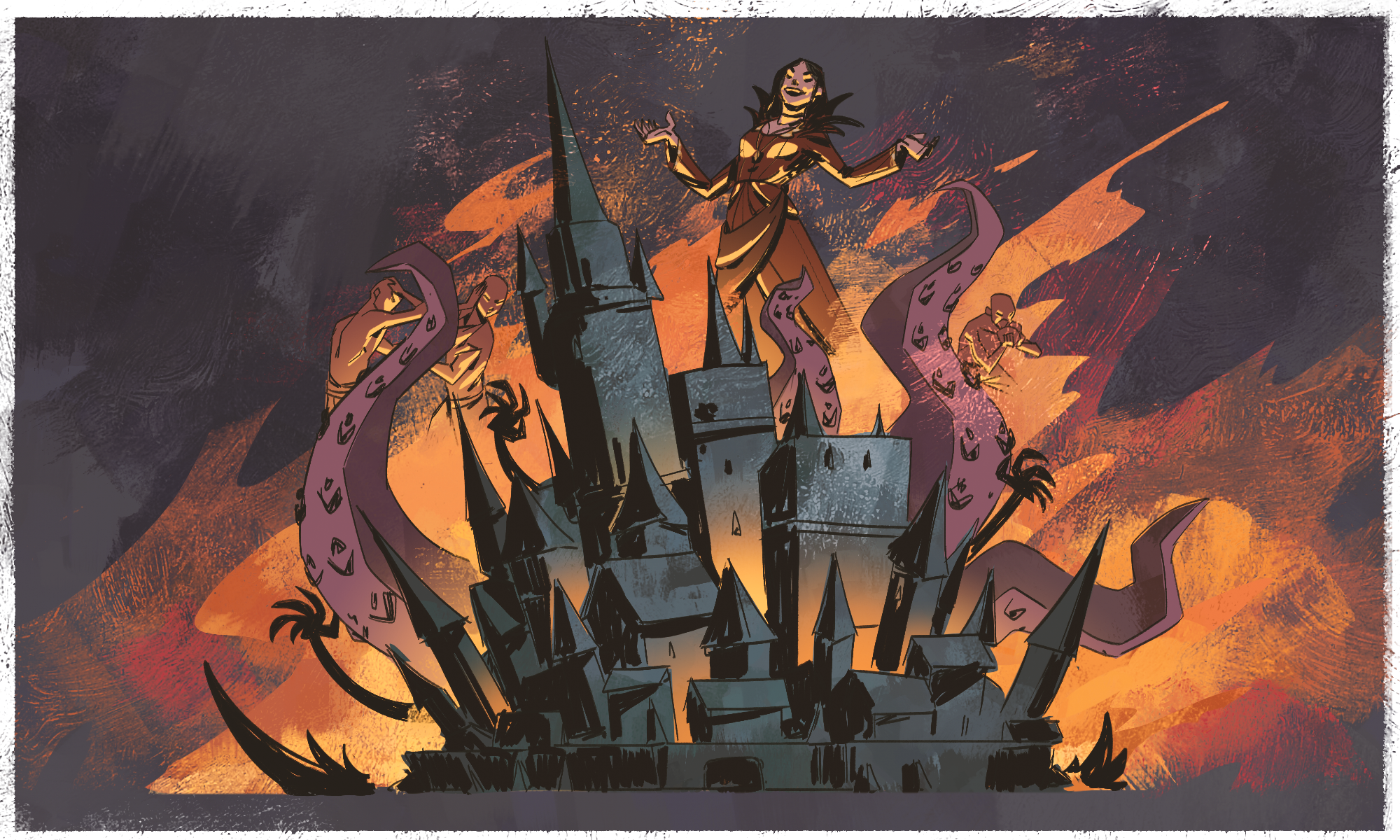 On one of Levia’s late-night walks through the mansion, she heard a shrill, piercing scream, distant and muffled; the sound of pure, unadulterated horror. Resolute, she wandered in the direction of the sound, searching for answers—and later, a part of her would wish that she had never found them.

Through the keyhole of a solid oaken door, Levia glimpsed the walls of a room, painted a deep, dark, congealing crimson. The stained rugs were littered with scraps of parchment, and a pale, wizened hand grasped at a woman’s immaculately pressed skirts. Lady Barthimont’s laughter was clearly audible through the wood as a faint glow crept through the chamber, illuminating the indecipherable symbols carved into the floor at her feet.

Even through the door Levia could feel the swell of energy in the room, humming like the air before a thunderstorm. The sigils at the woman’s feet lit up one by one, flooding the room with a crimson light. As the one directly beneath her feet caught flame, the bodies of her servants were illuminated by a violent, crimson light, casting Lady Barthimont’s shadow along the length of the floor. With a satisfied sigh, she fell upon the servants and began to devour them in a fervid frenzy, spraying a fine mist of blood across the room, face streaked with blood and viscera. 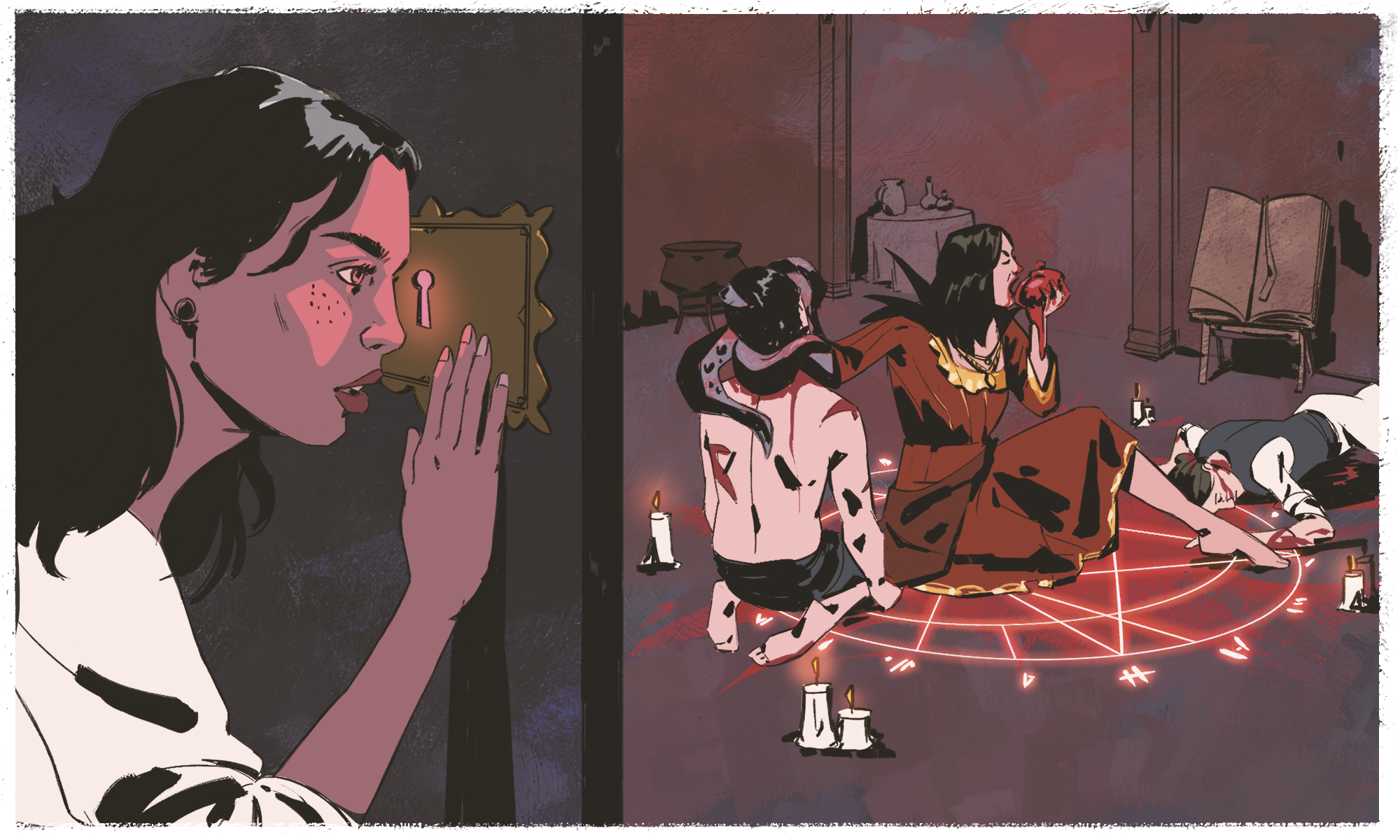 Fear seized Levia’s lungs in an icy grip, squeezing the breath from her chest—but as she stumbled back, she felt the fierce burning of a deep rage course through her veins. While the sight of the servants’ mangled, butchered corpses had disgusted Levia, a part of her cried out in hunger. This was perhaps her one and only path to power; her only opportunity to take charge of her own fate, lest she end up like them.

The following months found her back at Lady Barthimont’s doors, closely studying the dark rituals that were taking place within. She steeled her stomach against the helpless cries, the glistening of viscera in the low light, the gleeful expression on her mistress’s face as she slaughtered Levia’s fellow servants. Her focus narrowed to a razor’s edge, Levia looked upon the rituals and learned.

Under the cover of darkness, Levia slipped outside the castle walls, clutching a stolen dagger to her chest. With barely a whisper, she spilled her blood onto the sigils which encircled her, painstakingly recreating Lady Barthimont’s ritual in order to call upon the power of the beyond. That night, for the first time, Levia tasted the power of the Shadows for herself, as sweet as the first sip of water to a man dying of thirst. It blossomed within her chest, awakening a deep, insatiable hunger for more.

For months Levia sought that feeling, that single taste, in search of a way to quell the hunger within. She hunted small animals in the dead of night, sacrificing their writhing bodies for the sake of her dark rituals, mindless and unyielding in her quest for supremacy. Even as the estate transformed around her, Levia took no notice; she remained oblivious to the disappearance of her fellow servants, to the vanishing of Lord Barthimont himself, and took no notice of the new guests who began arriving at the estate. While she served them, bringing the nobility anything they requested, Levia’s focus was solely on her own quest for power.

One evening, just as the candles began to sputter, she found herself summoned to the great hall, where Lady Barthimont was hosting noble guests for the evening. Twelve servants in all, they entered through the main doors to find the room to be empty; empty, save for the banquet which lay before them. 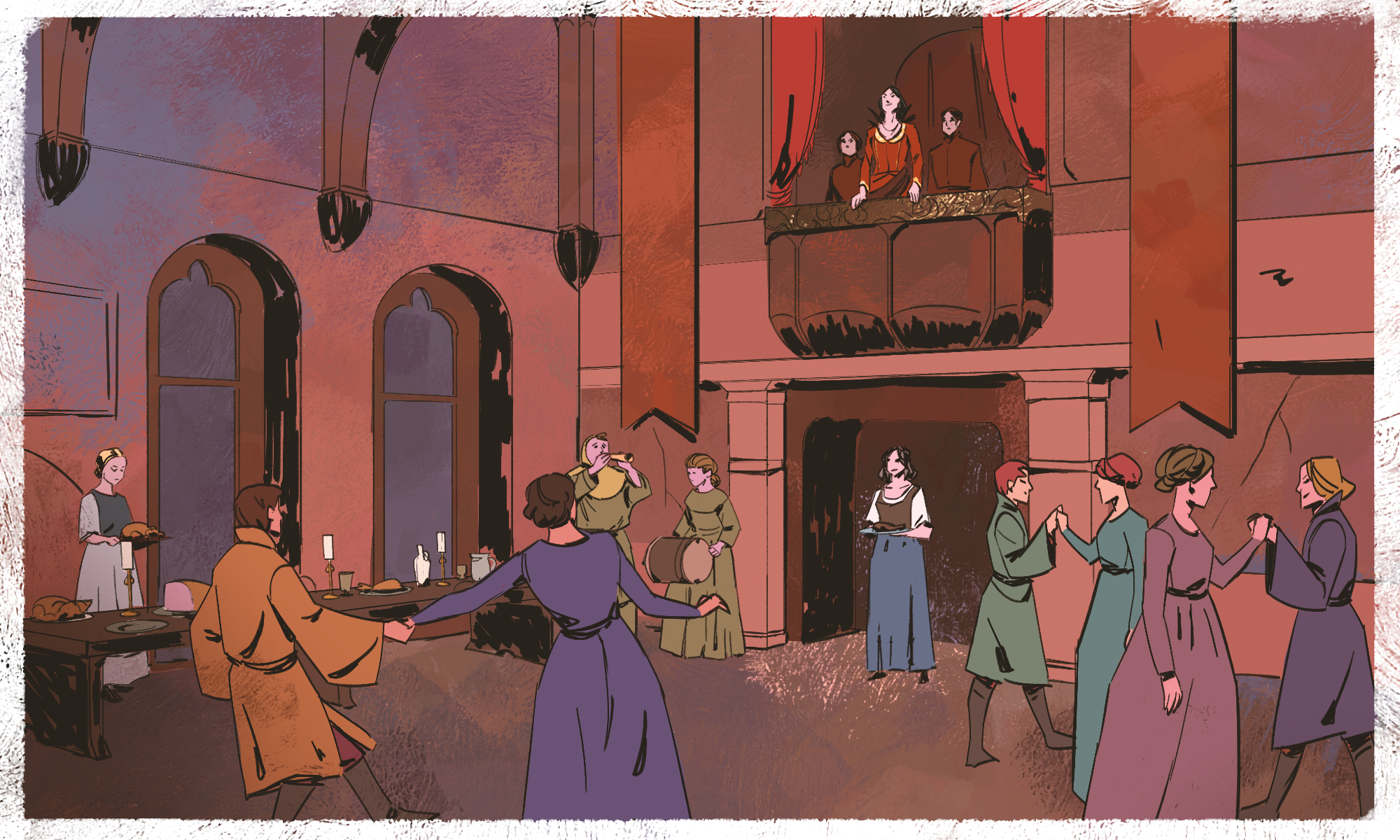 Great, glistening roast meats; piles of baked vegetables; baskets of fresh bread; goblets filled to the brim with dark, red wine; tiny cakes decorated with candied fruit and nuts; salted caramels wrapped in wax paper. Even from a distance, Levia could smell the spices and fresh herbs, the salted beef and rich gravy. As the other servants looked around for the lords and ladies, one of the youngest servants stepped forward. His eyes locked onto the nearest basket of buttery biscuits, he stretched out a hand to take one and quietly began to eat.

When the other servants rushed forward, a booming thunderclap echoed through the room. The doors around them slammed shut, one by one, and a quiet series of clicks confirmed the sound of the keys turning in their locks. When the last door was secured, a curtain above them slid back to reveal the nobility, perched in a viewing gallery just above.

Looking up at them, Levia caught a glimpse of Lady Barthimont’s pleased smirk. Her eyes were gleaming in the candlelight like fragments of steel, her canines bared in an expression of anticipatory delight; she was a wolf who had cornered its prey, and now prepared itself for a feast.

A horrific, droning reverberation flooded the room, driving many of the servants to their knees. The walls ran red with blood, dripping scarlet stains onto the floor. The terrified screams of the other servants echoed off the walls as they collapsed, their bodies beginning to dissolve, melting into rancid puddles of flesh and blood. The smell of their burning marrow seared the back of Levia’s throat, her very bones vibrating as her skin began to boil and her legs trembled beneath her. 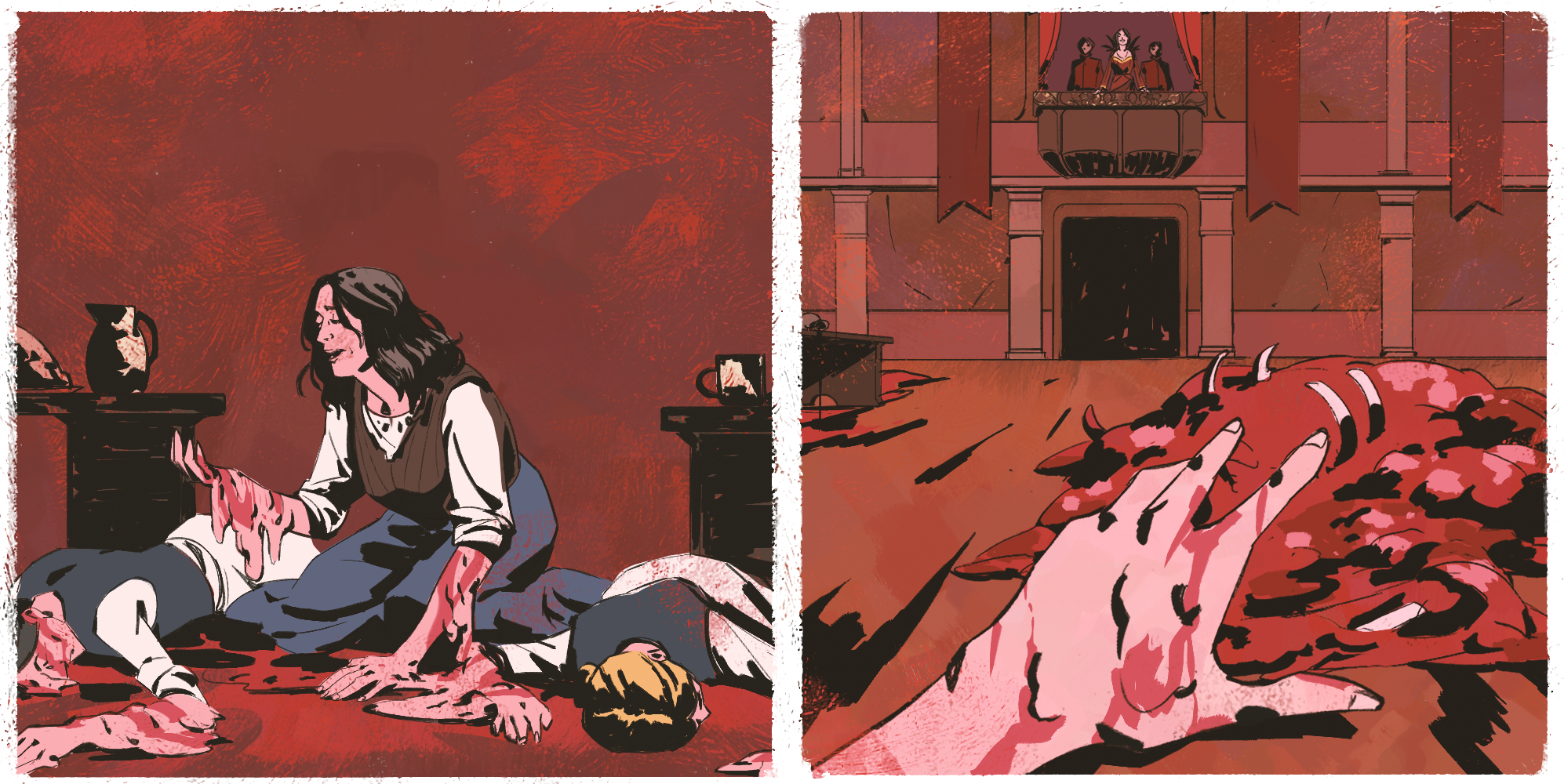 Painfully aware of the fate which awaited them all, she reluctantly succumbed to her need to survive and enacted the final, terrible price of the rituals she’d learned from her mistress. With a bellowing cry, she crawled forward and lunged at the nearest body, tearing its flesh away in strips and cramming the raw meat into her open mouth. Her mind turned grey with smoke, her consciousness detaching from the gore which surrounded her. Through a veil of wine-dark mist, she glimpsed a dark entity, surrounded by an endless sea of crimson and ivory, its gaping maw lined with hundreds of massive fangs.

As the beast drew nearer to her, the dim light revealed the rotting flesh clinging to its mutated body, marred by blood and acid bile. Great tendrils peeling off its back writhed, striking out at the shadows. Its clawed hands reached towards her, tentacles creeping along the stone floor like the roots of the darkness itself, and Levia was quick to dodge its slashing attack, ears ringing with the echoes of the creature’s guttural roar.

She threw herself at the beast, feeling her bloodlust spill over into an all-consuming sea of red. Through the haze she could barely see the creature before her, and blindly lashed out at its altered form. She felt its flesh tear beneath her talons, heard its screech rippling through the air, smelled the molten, ink-black blood which spilled forth from its injuries; she could almost taste its acrid bile on the back of her tongue.

The marble floor caved in under the weight of her body, stone tiles cracking as Levia leapt back, landing on her feet. As her bloodlust finally began to fade, she became aware of the blood and viscera coating her skin; she looked down at the weight in her left hand, and met the blank-eyed stare of Lady Barthimont’s disembodied head. For the first time in months, the great hall was completely silent, stained red from the carnage which surrounded her.

At last, Levia has been released from her erstwhile mistress’s control, and is finally free to decide her own fate. However, the strength she now wields has come at a terrible price. Once someone has sacrificed a living being, the grip of the Shadows is as iron. Levia is compelled to follow the whims of a creature from the beyond, succumbing to her base instinct to destroy and consume. Now that she has been released from the Barthimonts’ clutches, Levia refuses to let anybody else control her ever again.