With the upcoming ProQuest Season 2, GEM has had a new feature.

Stores can now record the Heroes played during their event.

Tournament organizers now have the option to Assign Hero in the registered player field. Selecting this will take you to the Hero selection page.

From the drop-down, you can select any current Hero. In a Classic Constructed event all Heroes will appear, for Blitz, only young Hero options will appear.

Adding the Heroes to your registered players can be done at the start of an event after decklists have been collected. When an event makes a top cut whether it's top 4 or 8 the following prompt will pop up prompting you to assign Heroes:

You are able to update players' Heroes (both active and dropped players) even after you have made the top cut. If you get to the finals of the event without entering the finalist's Heroes you will get this prompt: 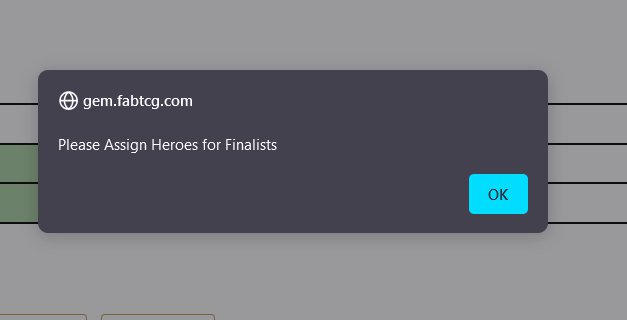 You will not be able to proceed without updating the finalist's Heroes. You can head back to Registered Players and the finalists will appear at the top of the list for you to update. Once this is done you can proceed to the finals as normal.

The Hero selection option is designed for both stores and LSS to gather coverage information and for use in updating the Living Legend Leaderboards. While we require this information for events like Skirmish and ProQuest you can record this information for any event you run. However, any event that ends in a top cut will require you to enter the finalist's Hero information before you can proceed.

Any questions on this please contact the team at op@fabtcg.com