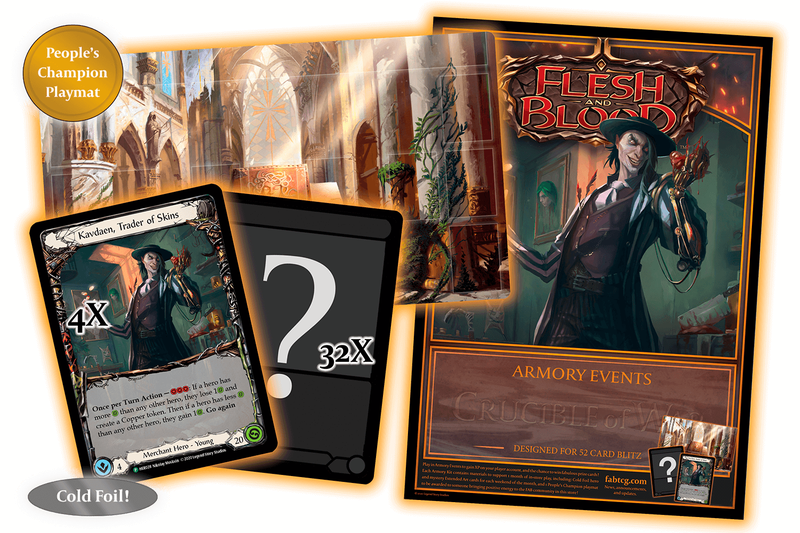 Armory Kits set the theme of prizes for weekly Armory Events at your local game store. The clever and crafty Merchant Kavdaen, Trader of Skins is striking up a bargain as he moonlights as a traveling salesman, temporarily leaving his accustomed black markets and impromptu back-alley dealings in the underbelly of the Pits, to be found at your Local Game Store this month! So do both yourself and Kavdaen a favor, and pay him a visit this April to snag a deal by earning yourself a Cold Foil version of the broker of bargains, Kavdaen, for winning your weekly Armory Event, or pick up some mysterious Rainbow Foil Extended Art cards for participating as thanks for your patronage as a loyal customer to the tricky trader. One deserving player from each community will be awarded a People's Champion playmat featuring the artwork of Gorganian Tome, being rewarded to the player who has contributed the most to their local community throughout that month.

Don't forget to bring your loose change before you sit down to watch two Product Development Assistants, Karol Ruszkiewicz and Newsun Zeng, face off and talk smack to each other as the cunning Merchant, Kavdaen, tries to squeeze every copper out of the ever-popular Dorinthea's pockets, a high-class Warrior that isn't here to haggle in the most recent Hero Spotlight, playing the Blitz format!

Find an Armory Event Near You!

So, what are you waiting for? Plenty of opponents are waiting on the battlefield with this month's themed Armory Events. Find an Armory Event near you with our Event Locator, and perhaps contact them in the case of in-store play being unavailable to find out about alternatives to participate.

Armory Events are the perfect way to help grow your local community of Flesh and Blood players by offering them a weekly/consistent event to play some games and earn great prizes! By signing up to host Armory Events you will be eligible to receive Armory Kits every month for free!

Sign up to GEM (Game Event Manager) today in order to start your journey in running Armory Events and growing your Flesh and Blood community!

Existing stores should contact their distributor representative on being supplied Armory Kits.

If in-store play is not currently feasible please contact us (op@fabtcg.com) for some tips and advice on how to utilise the contents of each Armory Kit.