The knowledge contained within this ancient handbook shall serve you well
on your journey through the perilous land of Rathe. 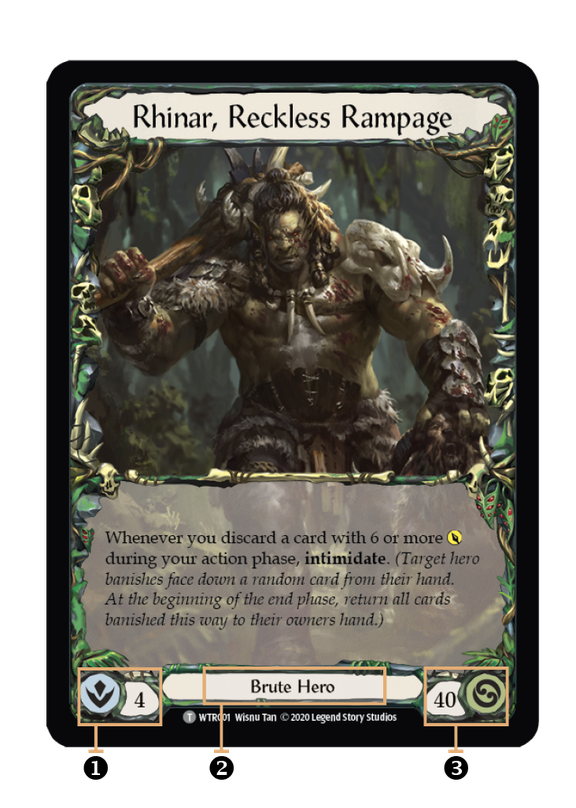 Makings of a Hero

On the first turn of the game only, both players draw cards until the number of cards in their hand is equal to their hand size.

You may have cards in hand greater than your hero's hand size.

Your class determines how many cards you can include in your deck.

Reduce your opponent's life to zero to win the game. You may gain life above the printed life value of your hero card.

When a card's text contradicts the rules of the game, the card's text takes precedent.
Card rulings and interactions can be found below. 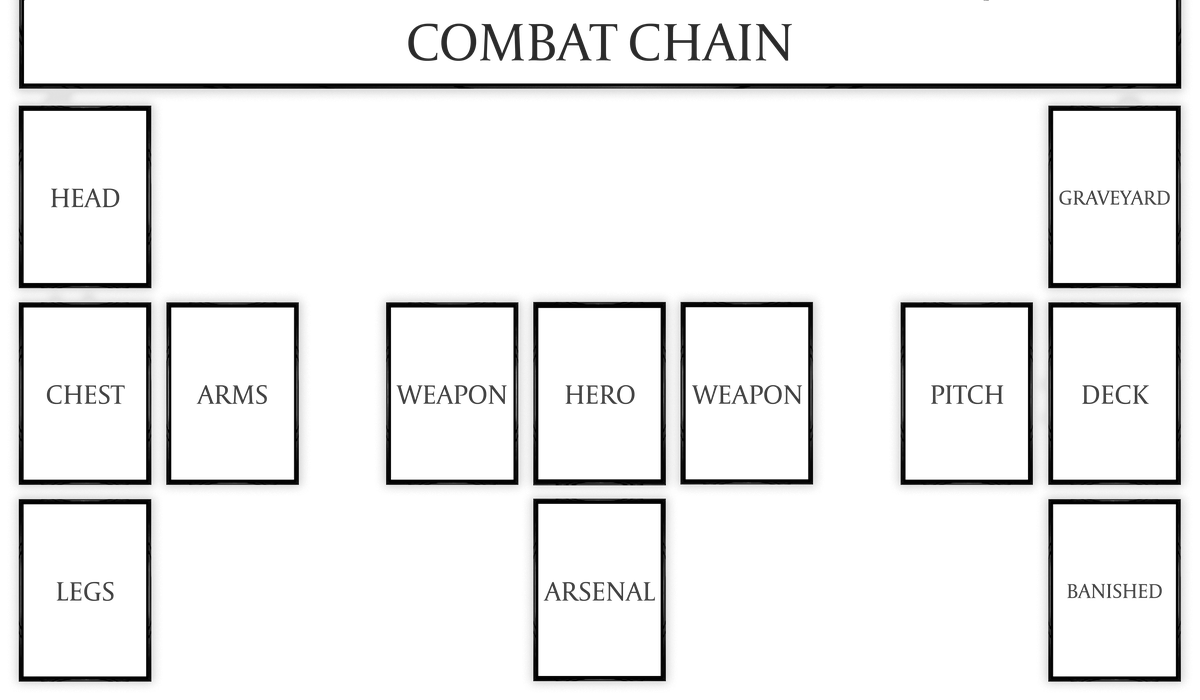 Zones provide structure to the placement and movement on cards during the course of gameplay. Some cards refer to "the arena", which is a non-specified zone within the overall play space. It's used for cards that stay-in-play after they resolve, such as items and auras.

Start the game with your hero, weapon(s), and equipment in their respective zones. Randomize your deck and place it in the deck zone. Both players begin the game with cards in their hand equal to their hero card's hand size.

The arsenal is where you can store a key card for use on a future turn. At the end of your turn, if you have a card in your hand and your arsenal is empty, you may put a card from your hand face-down into your arsenal.

You cannot pitch or defend from the arsenal. You can only play cards from arsenal. (Tip - Defense reaction cards can be played from arsenal.)

There are 7 different card types that exist in Flesh and Blood. The following 4 card types make up your deck:

The following 3 card types begin the game in the arena:

There are 4 different activated ability types that exist in Flesh and Blood:

Card subtypes are used to attach additional information to a card. Subtypes have 2 functions: 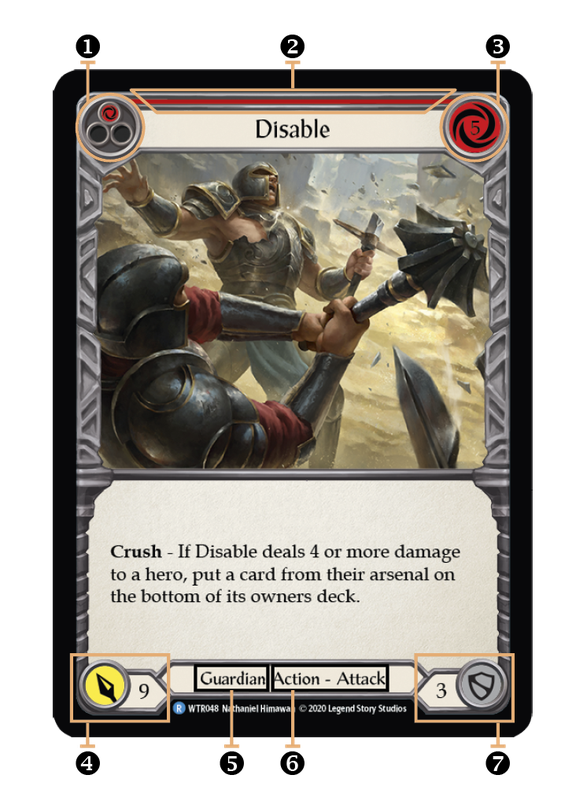 Examples of other card types can be found in the appendix.

You can pitch 1 or more cards from your hand to gain resource points equal to the card's pitch value. To pitch a card, put it face-up in the pitch zone. You may only pitch a card when there is a resource cost to pay, and you don't already have resource points in your resource pool that could pay for that cost.

At the end of every turn, both players put all cards in their pitch zone on the bottom of their deck in any order.

At the beginning of your action phase each turn, you get 1 action point.

There are many ways to gain additional action points, allowing you to play more than 1 action point in a single turn. The most common way to action cards or activated abilities with the keyword go again.

The chain is the framework for how cards, activated abilities, and triggered effects are processed, can be responded to, and resolve.

The combat chain is the framework for how players attack and defend. It's mostly through interactions on the combat chain that the winner of the game is determined.

When you play an attack to an empty chain, a combat chain opens and the attack becomes chain link 1. When a chain link resolves, you may continue the combat chain by playing another attack. Each additional attack creates a new chain link; chain link 2, chain link 3, and so on. 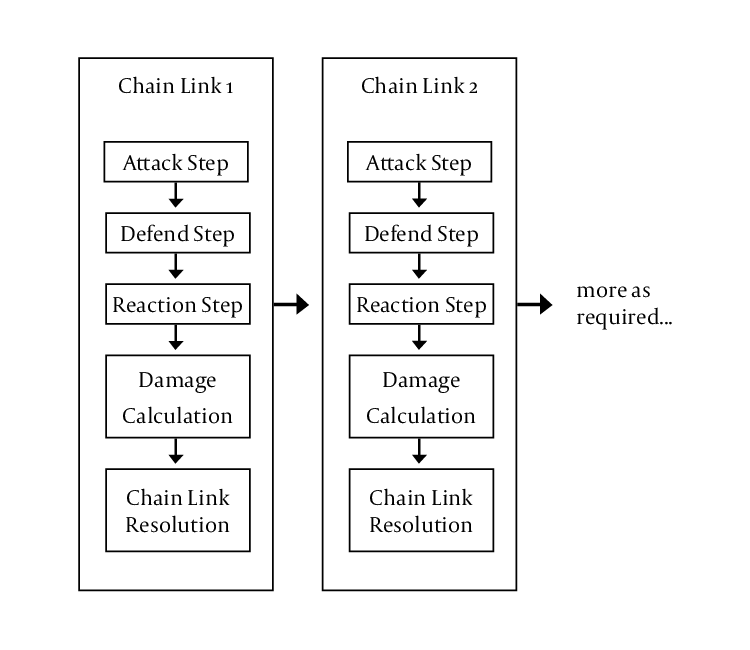 A chain link is structured as follows:

The action phase is when cards and activated abilities are played.

For official constructed play, a player registers up to 80 cards and 1 hero card. A deck may contain up to 3 copies of each unique card.

At the start of a match, each player places their hero card face-up in their hero zone, then each player chooses the weapon(s), equipment, and 60 card (minimum) deck they will use for this game from their registered cards. When both players confirm they have chosen the cards they will use for this game, they put their weapon and equipment cards face-up into their respective zones, randomize their deck, and begin the game.

A tournament match is best of 1, with a 50-minute time limit.

For detailed information about Flesh and Blood tournament rules, visit our rules and policies page.

The chain is the framework for how cards, activated abilities, and triggered effects are processed, can be responded to, and resolve.

1. If an action card, instant card, or activated ability is played, or an effect has triggered, and the chain is empty, that card, activated ability, or triggered effect becomes layer 1 on the chain. If the card has the subtype attack or the activated ability has the effect attack, a combat chain opens. The active player retains priority.

4. When a card resolves, it's put into the graveyard.

5. When layer 1 on the chain resolves, the chain closes and the turn player gains priority.

The combat chain is the framework for how players attack and defend. In general, it's the interactions that happen on the combat chain which ultimately determine the winner of a game of Flesh and Blood.

When a card with subtype attack or an activated ability with the effect attack is played to an empty chain, a combat chain opens.

A combat chain is made up of 1 or more chain links. A chain link is a special game state, where an attack moves through multiple steps of resolution.

The steps of a chain link are:

Players do not get priority during damage calculation.

Damage calculation is when the total power of the attack is compared to the total defense value of the defending cards.

Activated Ability - An ability printed in the text box of a card that requires a cost to use. Activated abilities are always written [Ability type] - [Cost]: Effect

Active player - The player who currently has the priority.

Arena - A non-specified zone within the overall play space, used for cards that stay-in-play after they resolve.

Arsenal - A zone where you can store 1 card to play on a future turn.

Aura - Cards with subtype aura stay in the arena when they resolve.

Chain - The zone where cards, activated abilities, and triggered effects are processed and resolved.

Chain link - A combat chain is made up of 1 or more chain links. Each attack creates a separate chain link.

Class - Each hero has a class. You may only have generic cards and cards linked to your hero's deck.

Colour Strip - Cards with a red colour strip pitch for 1 resource point, yellow pitch for 2, and blue pitch for 3. This is a quick way to assess your hand, and track your opponent's pitch zone.

Combat Chain - When you play an attack, a combat chain opens in the combat zone. A combat chain is made up of 1 or more chain links.

Deck - For official constructed play, a deck must have a minimum of 60 cards. If you run out of cards in your deck (exhausted), you do not lose the game. However if you hero becomes exhausted, you will likely lose the game, because you will not have cards to attack or defend with. A deck may contain up to 3 copies of each unique card

Defending card - A card that is adding defensive value to a chain link. Includes cards the defending hero defended with from their hand, equipment, and defense reaction cards.

Discard - When a card effect causes a player to discard a card from their hand. Pitching a card is not discarding.

Dominate - An attack that is difficult to defend. The defending hero can't defend an attack with dominate with more than 1 card from their hand. Equipment and defense reaction cards played from arsenal are a useful way to get around dominate.

Equipment - Head, Chest, Arms, Legs are the 4 types of equipment that exist. They start the game in their respective zones, and are not included in your deck. You may have 1 equipment card per equipment zone.

Go again - When an action with go again resolves, its controller gains 1 action point. Multiple instances of go again on the same card or activated ability do not stack. If a card or activated ability have multiple instances of go again, when it resolves, it's controller gains 1 action point only.

Hit - If the defending hero is dealt 1 or more damage during damage calculation (total power of an attack - total defense value of defending cards), the attack is considered to have "hit".

Item - Cards with subtype item stay in the arena when they resolve.

Layer - A card, ability, or effect on the chain waiting to resolve.

Pitch - Putting a card from your hand face-up into your pitch zone to gain resource points.

Pitch value - The number of resource points that would be gained from a card if you pitch it. Pitch value is shown in the top left corner of cards that make up your deck.

Reprise - A warrior mechanic that showcases the prowess a warrior has when they are engaged in close combat. Reprise effects "turn on" if the defending hero has defended with a card from their hand.

Triggered effect - A card effect that starts with "When" or "If".

Turn player - The player whose turn it is.

Young Hero - Young hero cards are primarily used for sealed deck and booster draft play. We recommend using young heroes when learning to play Flesh and Blood, and when you want to play a shorter game (15-20 minutes). 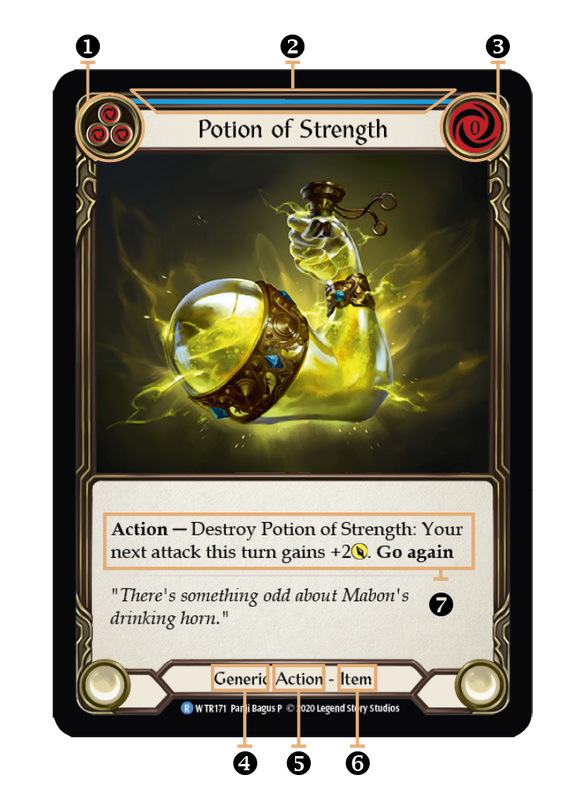 Items and auras stay in the arena until you use them. They are powerful because they allow you to do more in a single turn than you normally could with only the cards you draw. 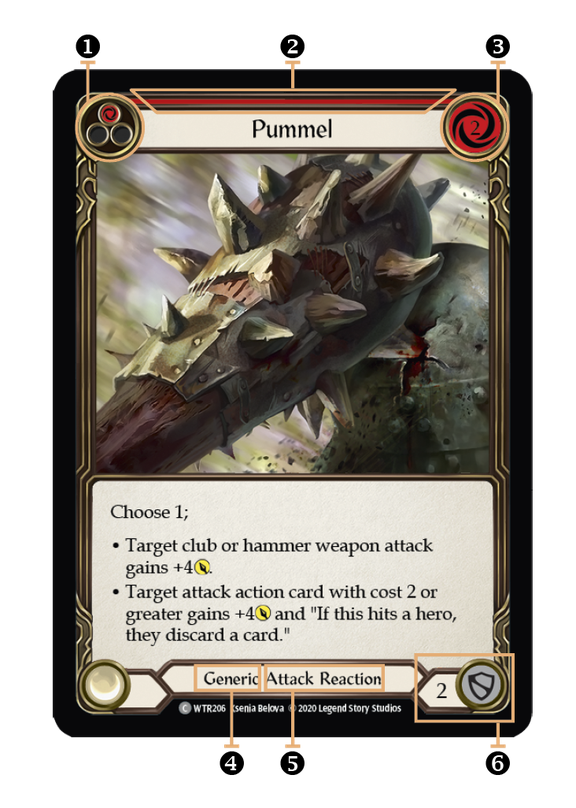 Attack reactions are sneaky, allowing the attacking player to buff or modify an attack after the defending step has passed, pushing through damage or important hit effects. 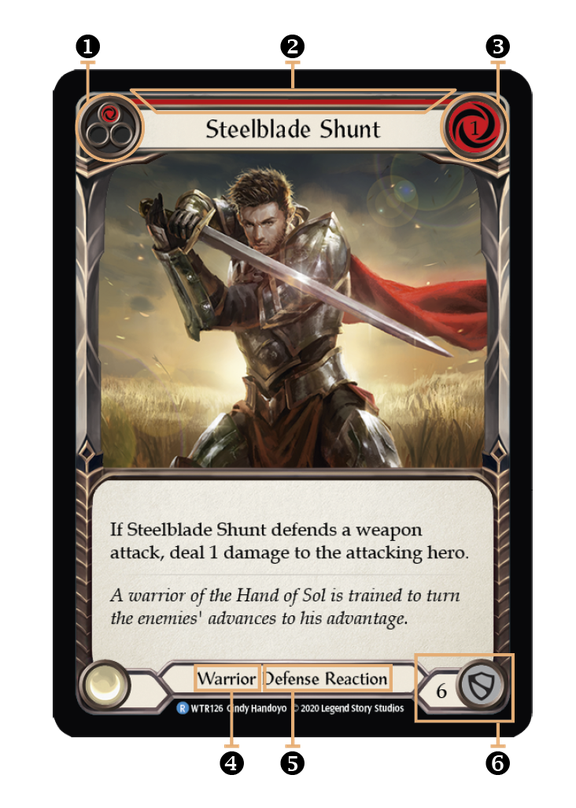 Defense reaction cards are powerful because they allow the defending player to be the last to act, provide effects while defending, and they can be played from arsenal. 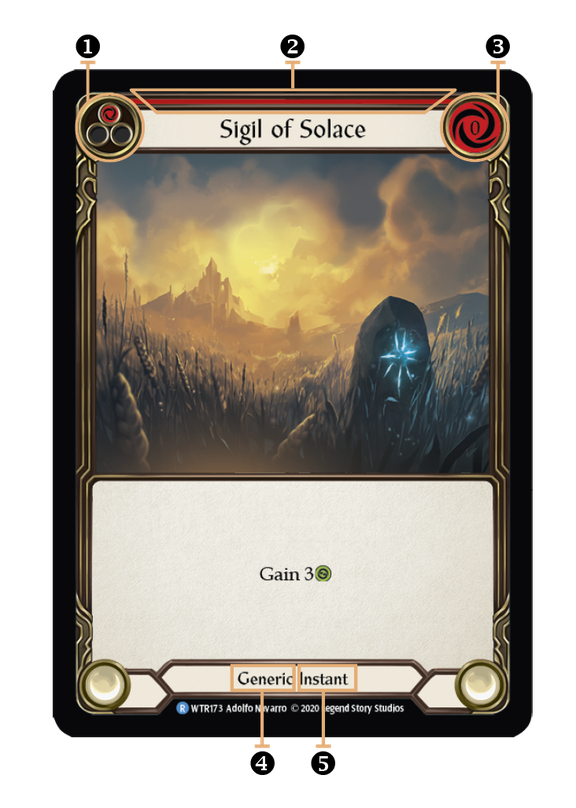 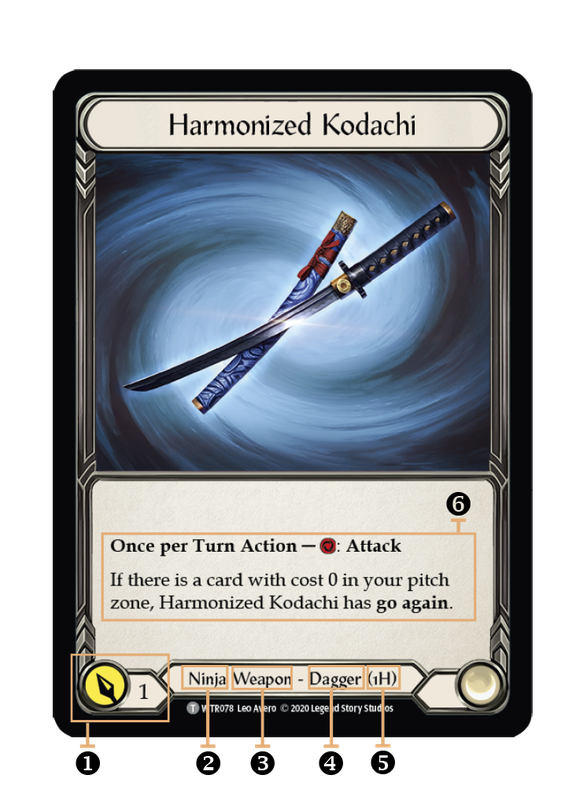 Weapons are powerful because they are reusable sources of damage. 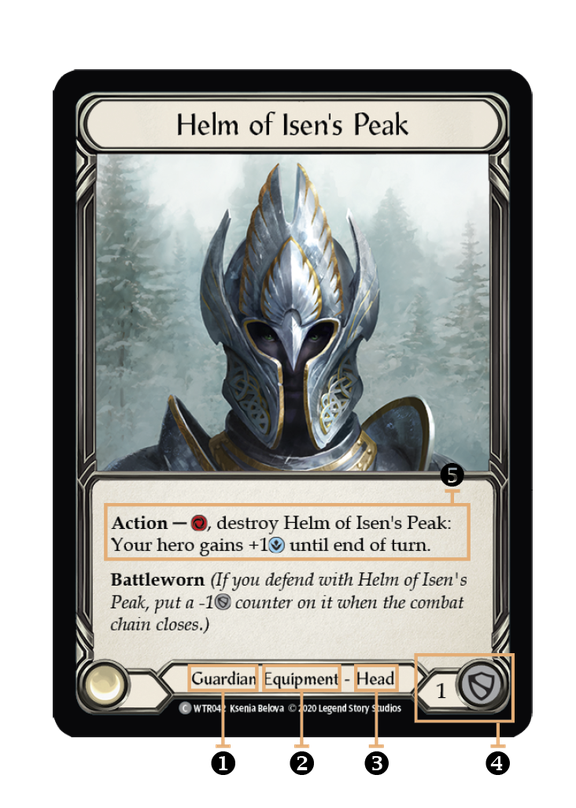 Equipment are useful because they provide defensive options without having to use cards from your hand. Equipment can provide effects to support your core strategy and/or counteract the opponent's strategy.