It has been brought to our attention that there is an obscure error that was highlighted by the technical interaction between Blizzard and Exude Confidence. Specifically, the current rules as written allow the passive player to play Blizzard targeting an attack action card when it is played, but before there is an attacking hero. This means that the opponent would not have the opportunity to pay the cost to prevent the effect from removing or preventing go again, because they have not yet been assigned the attacking hero label for that chain link.

For this reason, we are giving a functional errata to Blizzard, effective immediately. This change aligns the "window of play" with the opponent being able to pay the cost to prevent the effect, ensuring that the card works as intended. This change will also allow Blizzard to function intuitively on ally attacks. 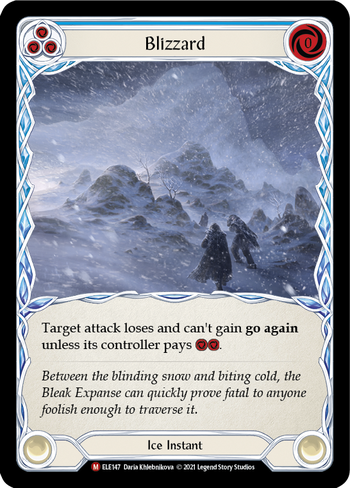