The Classic Constructed environment is lush with surges of Lightning, the crackling of arcane, cheap, economically costed attack actions with the threat of plundering the opponent and drawing into more and the collective sting of shockwaves and sorcery. Today we have a quick look at the CC circle of life, also known as “Rock, Paper, Scissors.”

Briar’s aggression is in full bloom as we saw six copies of the Warden of Thorns in the Taiwan Nationals Top 8. Briar is a needle mover and a metagame sculptor. As the timeless tale of rock-paper-scissors goes, every winning strategy has a counter and the rock to Briar’s scissors, is Ice. More specifically Oldhim and Lexi.

Li-Hong Yeh took his control style Oldhim deck to a second place finish and despite not winning a reasonably favoured matchup for Oldhim against new Taiwan National Champion, Limbo’s Briar, Li-Hong froze out enough aggressive opponents to finish an incredible second place and solidify Oldhim’s place at the top of the Tales of Aria Classic Constricted metagame.

Lexi plays a similar strategy to Oldhim in terms of giving opponents Frostbites to disrupt their turns however rather than the Oldhim approach of defending with his hero ability, Rampart of the Ram’s Head, Crown of Seeds and Arcane Barrier, Lexi’s greatest defense is offense. As Canada National Champion Yuki Lee Bender showed us, Lexi aims to win games through attacking pressure thanks to an almost endless amount of arrows, a second arsenal and the almighty Three of a Kind, while disrupting the opponent's resources. A brain freeze indeed.

Bravo is another top deck at this point in the season. Despite not seeing any original Guardian in the Taiwan Top 8, Bravo plays similarly to Oldhim but, without the Frostbites. Bravo often runs a similar defense suite to combat the Briars and the Chanes of the format with upto 2 instances of Arcane Barrier and the Titan’s Fist-Rampart of the Ram’s Head combo.

If Briar, Chane and aggressive strategies set the pace of the metagame and can be seen as “scissors”, and Oldhim, Ice Lexi and Bravo are the “rock” which does well against the Runeblades and friends, then what is the “paper”, a counter to slower, more controlling archetypes?

This is where the curious case of Rhinar, Reckless Rampage comes in. With a Top 8 finish at the Netherlands Nationals, a second place and Top 8 finish at France Nationals and Yang Zhao Zhang taking Rhinar to a Top 4 finish at the Taiwan Nationals...the original Brute may be in need of some closer analysis.

So why is Rhinar loitering around these top tables? He doesn’t play a “I set the pace and you have to keep up” strategy, nor does he particularly want to win through almost-only a control strategy of defending until the opponent has no deck left. When identifying who or what Rhinar really is, let’s start by determining what he is not. Rhinar is not scissors nor is he rock. Rather thematically and coinciding with his love of big trees, Rhinar is paper in the CC circle of life.

Many of Flesh and Blood’s greatest minds will tell you that Rhinar isn’t doing well because he is explicitly a counter to Briar and other aggressive decks, but rather he beats the decks that beat those decks, while having a very well rounded matchup against the rest of the field.

Rhinar can attack a control style deck, or one that wants to bide its time, awaiting the perfect setup before striking the opponent, in ways that force the opponent to defend with cards essential to their delicate strategy, messing up their plans within plans. Rhinar’s intimidate keyword, banishing cards from the opponent’s hand for a turn creates huge problems for slower decks and even more so for Elemental decks looking to fuse or decks looking to perform specific sequences each turn. Against the aggro decks, the “scissors”, things are more challenging for Rhinar, but far from unwinnable. Against these aggressive decks Rhinar plays much more of a control style deck, defending heavily and maintaining a high life total, with the occasional burst damage turns thanks to one of Flesh and Blood’s most powerful cards ever printed, Bloodrush Bellow. With Unmovable, Fate Foreseen, Sink Below and Brute’s reckless Swing combined with Sigil of Solace and Tome of Fyendal for some life gain, Rhinar, Reckless Rampage is a very flexible massacre machine. Rhinar may be at times reckless, but he is far from random.

While Briar lead the charge on the battlefield, Bravo and Lexi weren't far behind, with one of Flesh and Blood's oldest heroes stepping up to bat alongside two of our newest. Fellow Welcome to Rathe heroes Dorinthea and Rhinar also held their own in the field, chasing alongside Arcane Rising's Dash, Inventor Extraordinaire. Other contenders included Katsu, Prism, Oldhim, Kano and Chane. 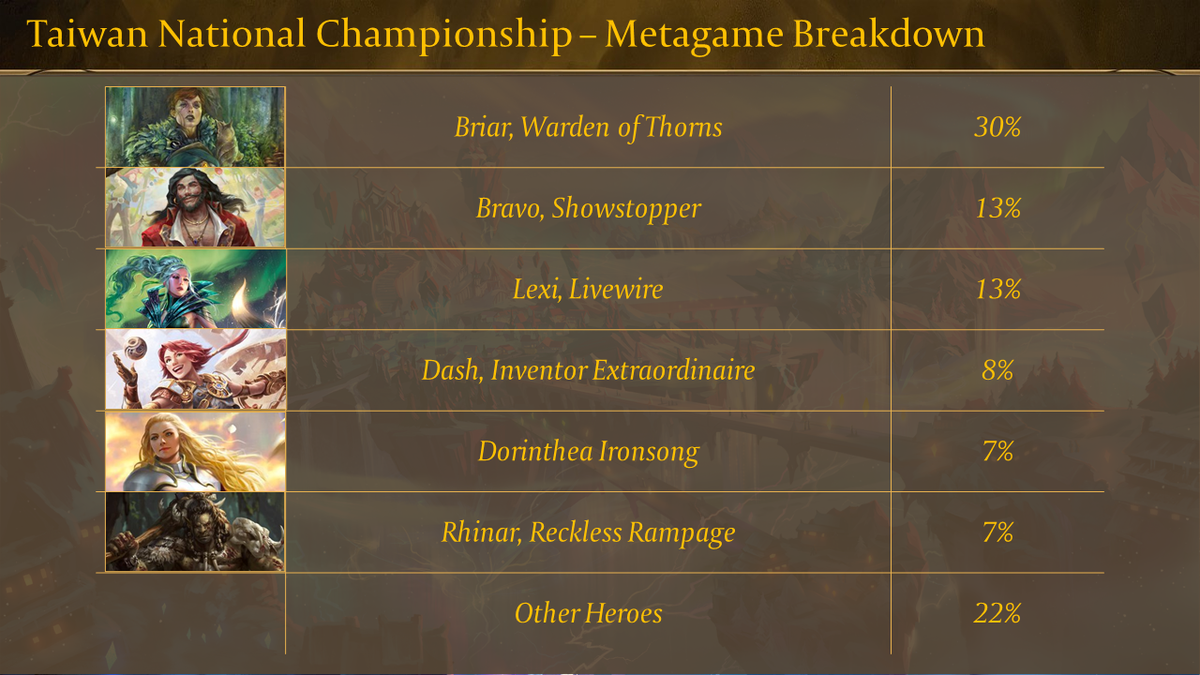 By the end of Day One, players Limbo, Night Sixteen, and Li-hong Yeh were the only three on 8-1, all three playing Briar, Warden of Thorns.

Li-hong first began playing FAB in March 2020, signing up for an Arcane Rising pre-release as his first event, earning his invitation to the National Championship through a Last Chance Qualifier event at Tower of TCG.

Limbo was the first Flesh and Blood player in Taiwan, placing in the Top 8 of the Taiwan National Championship 2020, as well as four different Skirmish events throughout 2021.

All three rose through the Top 24 to take their place in the quarterfinals alongside Li Hue Yan, who played steadily through Skirmish, Road to Nationals and Armory events before qualifying; Joseph Chang first started playing in November, participating in a Last Chance Qualifier at Tower of TCG as his first event; Kevin Chung-Hsieh first started playing in December last year, winning a Road to Nationals event in August to qualify for the Championship; while Gao Zhi-Peng was an avid participant across both Skirmish seasons, racking up a Top 8 finish at Road to Nationals to secure his place at Nationals. 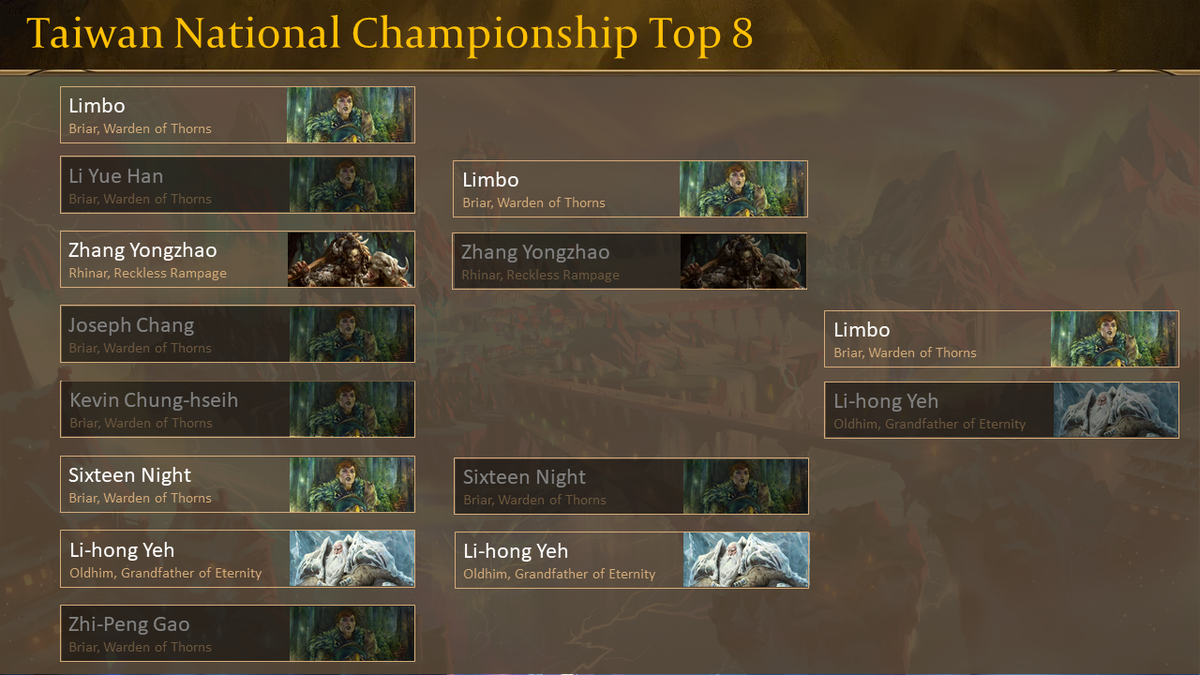 The quarterfinals of the Top 8 saw four Runeblades left in the dust, leading into semifinal rounds featuring Briar vs. Oldhim, and Briar vs. Rhinar. While Yang Zhao Zhang fought fiercely with the Brute's club, Limbo's Briar took the crown, closely followed by Li-Hong's Oldhim, who reigned supreme over Night Sixteen's Briar deck.

That left Limbo and Li-Hong to face off in the finals, Runeblade to Guardian, two of Taiwan's longest-running players, both of whom participated in the Taiwan National Championship in 2020. Limbo, who previously made it into the Top 8 of the 2020 Championship, took the win with his Briar deck, claiming his place as Taiwan's National Champion. 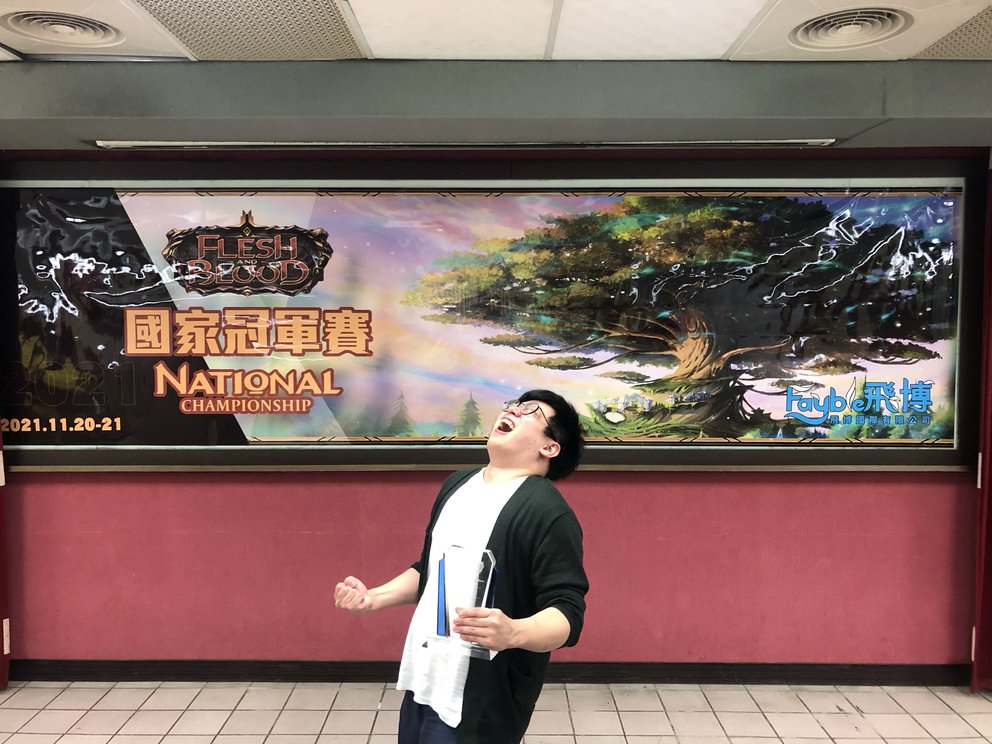 We caught up with some of the Top 8 players to discuss their deck builds, matchups, and performance at the event.

The process of deciding what hero to bring was one of the most rewarding and enjoyable aspects of this game. Having access to local stores and discord, I was able to duke it out with players both local and abroad. I had seven decks at the start of the season. It eventually narrowed down to Lexi and Briar. I ultimately decided to take Briar because I had been playing it for a longer time and with sideboard choices, the more difficult matchups were not too bad. It was also very consistent and powerful. Special thanks to all the people that have helped me on this journey. Too many to name here but you all know who you are!

The key matchups I considered in choosing this deck for me were Prism, Bravo, Ice Lexi, Oldhim, and of course….Briar.

I felt like the key cards in my deck were Plunder Run and Lightning Press. Having that extra surprise factor and potential resource advantage was very crucial.

Yes, I was satisfied with my deck’s performance. More importantly, I was definitely satisfied with the event. Having the opportunity to go head to head with so many amazing players from all over Taiwan was both challenging and very fulfilling. The judges and staff were also all very professional and welcoming. I am very excited for the next big event!

I would say the core deck itself is already very consistent and powerful. The improvements I would work on would be my gameplay and the situational cards that I would put in depending on the matchup.

After watching my close friends, Matthew Foulkes and Christian Hauck, both win their respective national championships and Last Chance Qualifiers being announced here in Taiwan, I wanted to give the game a shot and also win a trophy like them. On Monday, Christian and Matthew both taught me how to play Flesh and Blood and their Briar, Warden of thorns deck in 4 hours over Discord. Going into the Last Chance Qualifiers with only 4 hours of game time under my belt, I was able to manage and get the win to qualify. Briar was the only hero I knew and I was barely comfortable enough with it to play at a reasonable level at that point. So, it was an easy choice to bring Briar!

Before last week, I didn’t know how to play the game, so I mostly went into every match up blind, having to always read every card my opponent played. Having a background in other TCG games I knew my deck was an aggressive deck with a linear game plan of applying pressure and gaining tempo early, leaving my opponent always on the backfoot.

I decided to play Christan Huack’s version of Briar as it packed the combo of Channel Mount Heroic and Force of Nature. This allowed me to have the highest chance of winning without having to interact too much with my opponents. Going into Nationals with what I’d like to think the least knowledge of the game, meta, and experience, having a chance to get lucky with a 2 card combo as powerful as Channel Mount Heroic and Force of Nature would give me a shot into hopefully making Day 2.

My deck’s performance was great, however the pilot of the deck, me, wasn’t the best. I made obvious mistakes such as thinking Force of Nature was an Earth card based on the art and not knowing what other Heroes did definitely made me the underdog sitting down each round.  This deck is definitely a contender for being one of the best decks in the format.

Hopefully when more Earth action cards will be printed, they can replace some of the blue pitch earth cards in the current deck. The current ones that are a requirement to play Channel Mount Heroic, such as Tome of Harvests and Autumn’s Touch, are extremely clunky.