ProQuest Melbourne 2021 - The Day That Was

The Calling Melbourne was originally scheduled to take place on June 12th, but due to a COVID lockdown, the event was postponed to July 10th. By that point some restrictions in Melbourne reduced, but there were still limits on gathering sizes and players travelling from out of state. As such, we took the decision to postpone The Calling event, but in support of the Melbourne community, who had been through a series of significant lockdowns, we decided to still put on a Pro Tour Invitational event for players to get out and enjoy. Sadly, Melbourne and Sydney are now both back in lockdown, and our thoughts go out to the players over there along with the wider community.

We remain committed to bringing a Calling event to Australia as soon as is feasible. Legend Story Studios would like to give a massive thank you to Andy Palermo from Midian Gaming for his efforts in making the PTI a reality, and for providing us with this ProQuest article from the perspective of a hard working Tournament Organiser!.

The night before the event, I packed up the truck with everything I would need from computers, printers, stock, papers, life size standees, money and so on. I was there till probably midnight before I drove the truck I had hired for the event home.

With an immortal fear of not losing anything LSS had entrusted me with I took their heavy box of cards, mats, shirts and more into the house and kept it within arms reach of my bed as I slept that night. With an alarm set up, a trusty bat at the bed head and a body clock that would not let me get more than five hours sleep if I was lucky, I was confident that the Gold Cold Foil Skull Cap was going to be there in the morning. ;)

5am came well before it should have and I was up doing a small workout in the gym (LSS box in sight at the gym door) and then proceeded to have breakfast. As I had informed the hotel I would be there at 8am for a “doors open at 9am”. I left at 7am to go pick up my two workers for the day in the truck. Having started the day, I quickly realised I had left the phone at home so made an extra trip back. Needless to say, starting the 20 minute drive early allowed me to go back to get the phone and still make it to the hotel before 8am.

After getting access to the 'Ballroom' I found the place was immaculate. Tables were set up as requested and the hotel staff were prompt and professional. We began to unload the truck and set up PCs, stock and put numbers on tables. After some consideration about our extra tables, we decided to put COVID precautions in full effect and spread players out across tables and placed table numbers accordingly. 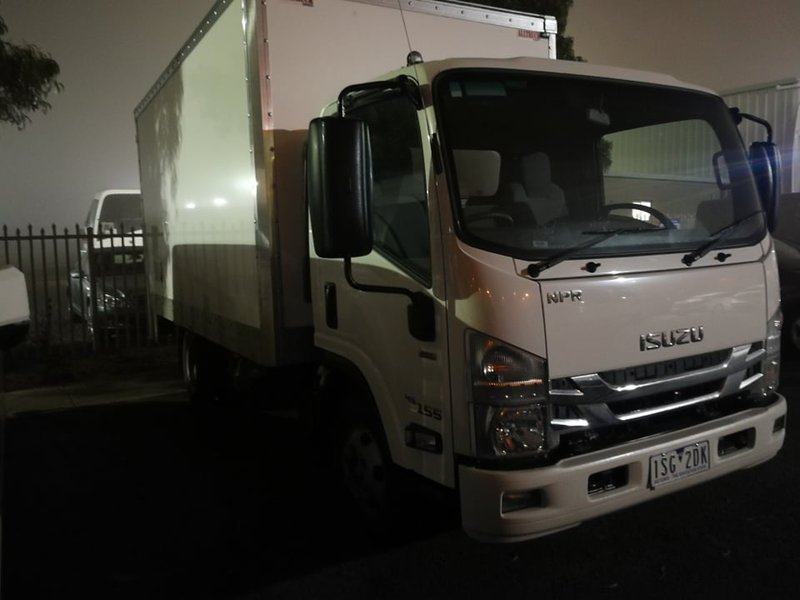 Once all these items were set up, judges and players started arriving and the day had begun. In the first hour of the event registration and the event starting I learned a lot of things which I started to note down. Simple things such as better placement of signs, procedures and what announcements I had to go back and make time and time again. While not affecting the event, from the perspective of an organiser and completist, I had a lot to take note of. And notes I took!

One item on my notepad was getting the streaming up and running. Although we no longer had a third party for the streaming, Logan Bolam was kind enough to bring some equipment for me to set up a streaming table from around round two. This haphazard (last minute) set up allowed us to stream games yet, in silence as I forgot to turn on the microphone on the camera for the feed. As the ProQuest was very last minute in the whole scheme of things, yet still very welcome in the absence of our Calling event due to COVID lockdown restrictions, I knew future events would be well prepared with the lessons I had learned from the event.

We decided to have a lunch break after round three and thought that this would be a good round to allow people to drop and enter a draft side event for the rest of the day. Also, at that time, I announced an auction that Midian Gaming would do after round six! This was something from my days doing conventions that I knew would get people excited for future events after they experienced it. 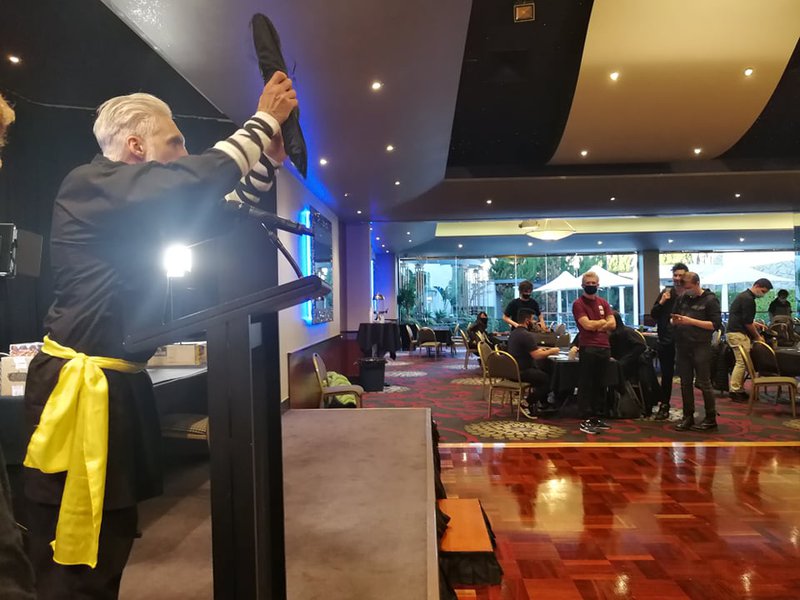 Well, rounds continued and we were starting to see the upper echelon of players form. I have to say that the judging staff I had on hand were some of my greatest assets of the day. The professionality and love for the game each of them held was second to none and they handled the day and event for me, taking feedback, questions and the like, away from me allowing me to get things organised. This was amazing! From time keeping to escalations, the day would not have been as good as what it was if not for this team and I am so grateful to have been blessed with them. I never appreciated the true value that these judges bring to the scene till I had them working for me in this common goal of the ProQuest.

After round six I started the auction. People present and with cash in hand (or not) attained some awesome deals including a Crucible of War box selling for AUD$900!! The items above and others went for crazy prices and many good deals were made during the hotly contested process. No doubt this type of thing will be a feature in future large events from Midian Gaming and people may start coming prepared. 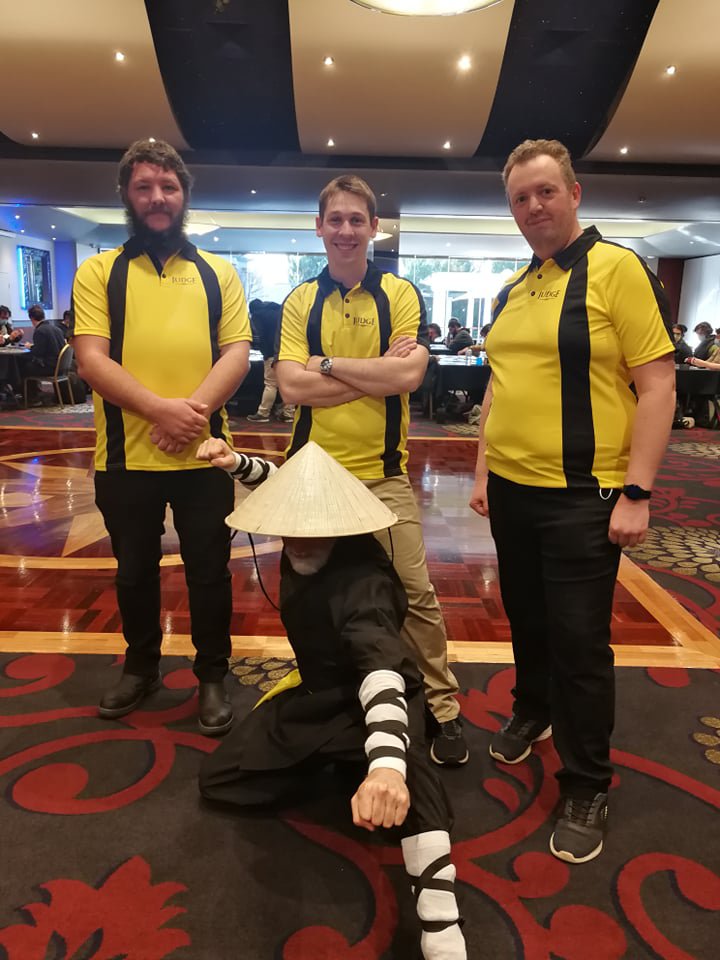 At the end of seven swiss rounds, our Top 8 looked like this:

Not long after the Top 8 draft started, we suddenly had four players in the mix, any one of them was able to take home the win! The semi finals consisted of Igor Brkic vs Matthew Clark and Daniel Perri vs Logan Boyd.

After some very competitive games we were left with the final between Igor Brkic and Daniel Perri.

The last time these two battled it out was in round six with Igor picking up the win. Both players however, finished the day on six wins, so both were shown to be human and not the unbeatable machines they may appear to be at first glance. At this stage of the tournament both players would naturally have been a little tired. We started at 10am and it was now 7pm - nine hours of gaming! If anything, the psychological fatigue at this time would have been immense. Knowing that Igor had beaten him in round six, Daniel knew he would have to overcome the past to claim victory in the present. After finishing first after swiss, Igor had the added pressure of having everything to lose after his immense efforts throughout the day. This was certainly a clash of the titans.

As players all crowded around my streaming screen away from the top table and keeping their voices quiet under my watchful and stern eyes and ears, Daniel and Igor proceeded to start the final.

Check out the final on the stream at the 7:34:00 mark in the link here: https://www.youtube.com/watch?v=mmh1iIkkyXY&t=90s 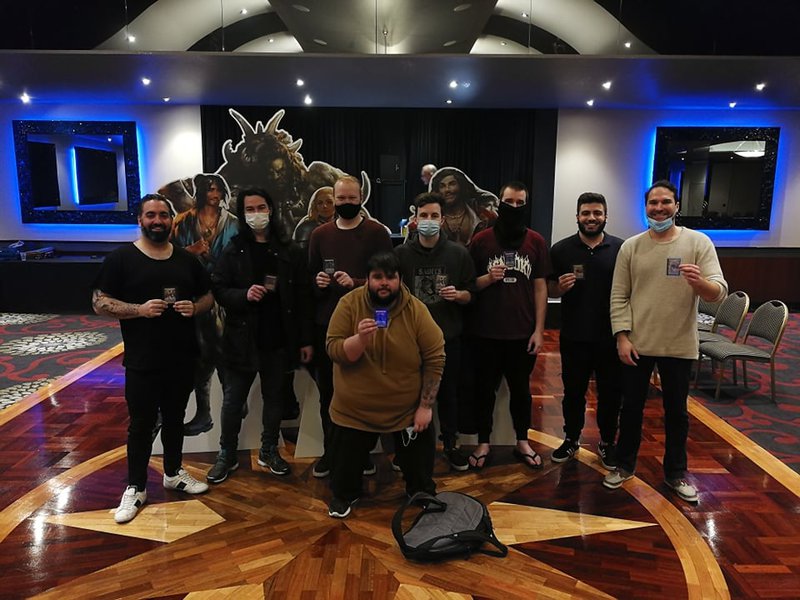 Daniel Perri after a long day came out as the ProQuest Melbourne 2021 champion!

Igor as always was a great and humble opponent and we could not have asked for anything more.

Last thing I remember was Daniel calling his parents and family to inform them of what he had achieved in what his family probably thought was just a casual pastime. After the ProQuest Daniel will have attained not only the respect of players around the world, but also those close to him who would come to appreciate the hobby he loves and enjoys and what it truly means to him personally for future events.

Overall it was a great day. 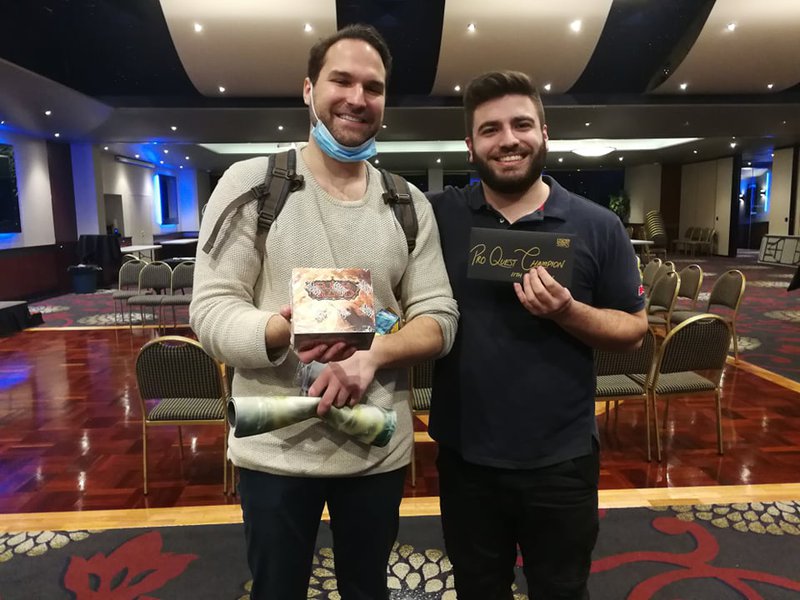