We're pleased to welcome Tariq Patel as a guest writer for the upcoming release of Uprising. Tariq Patel is a competitive player from the United States, who became the first US National Champion in October last year. He's since become a recurring strategy writer for ChannelFireball, a member of Team Dragonshield, and previously featured on the website for our Skirmish Gauntlet Blitz series.

Good day, dear reader. I have just arrived home from Sin City Las Vegas, where I took part in the Uprising World Premiere. While many of my colleagues will be talking about the Limited aspects of Uprising, I wanted to give everyone a glimpse into what Uprising may have in store for us in Classic Constructed! Traditionally the 3 pillars of Flesh and Blood have been aggro, midrange, and control and with the latest release of Uprising, each pillar got something new! Couple this with the exit of both Chane, Bound by Shadow, and Bravo, Star of the Show and we have a HUGE shake-up on our hands.

Let's start with the aggressive pillar of the format in Fai, Rising Rebellion. At first glance Fai is a Ninja class, meaning he will be looking to stretch the limit of your playmat area by creating go-wide combat chains far beyond the reasonable number accessible to most heroes.

Fai’s hero ability revolves around Phoenix Flame, allowing you to both start with one in the graveyard, and recur it at a discounted rate relative to the length of your combat chain. At first glance, Phoenix Flame may look feeble but synergistically, it's sum is greater than its parts. To name a few key synergy cards there is Rise Up, Lava Vein Loyalty and Phoenix Form, Spreading Flames… and the list goes on and on. The ultimate goal will be to create a combat chain of at least 4 links which should be trivial to do with Phoenix Flame in the graveyard and Searing Emberblade as your weapon (Remember that the weapon itself counts as a Draconic Chain Link!). Tiger Stripe Shuko even allows you to turn your Phoenix Flame into 2 power attacks. It is natural to look at the hero ability and Phoenix Flame and shrug your shoulders and say “So what, it's only 1-2 extra points of damage”, but remember that these little points of damage add up over time and give Fai extra reach against fatigue strategies, something that aggro decks have long struggled against. Personally, I view Phoenix Flame almost like Viserai’s passive hero ability, allowing small amounts of incidental chip damage to happen over the course of a game for little to no additional cost! 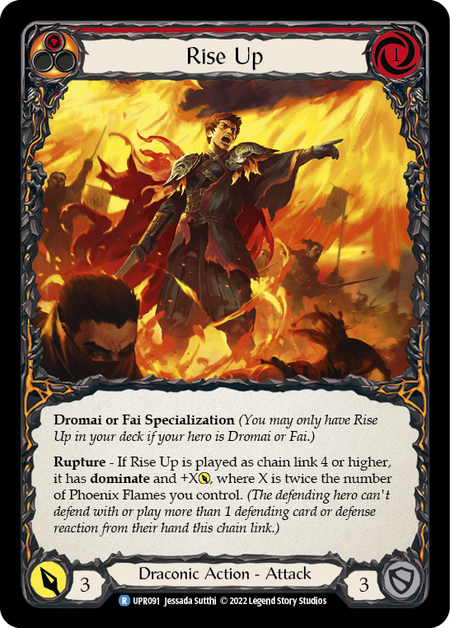 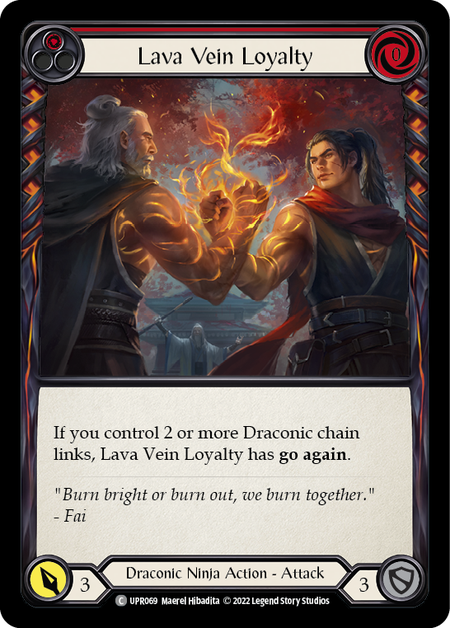 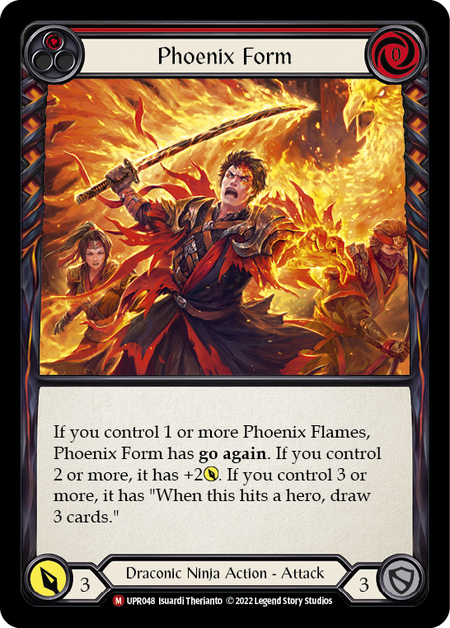 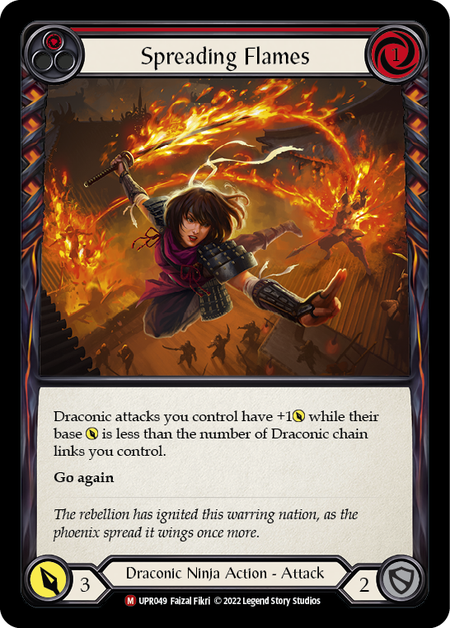 Once you create a big go wide combat chain, the rupture cards will be the ultimate pay off for Fai. Cards Like Red Hot, Rise Up, and Breaking Point will be the nail in the opponents coffin as your opponent will likely have little left to block with once chain link 4 is reached. Liquefy is another huge card for the aggro archetype. As stated above, fatigue strategies have always been the antagonist of aggro decks, largely due to Rampart of the Ram's Head and Crown of Seeds. Liquefy turns this interaction on its head allowing Fai to nullify these interactions and pull ahead over the course of a long, drawn-out game. 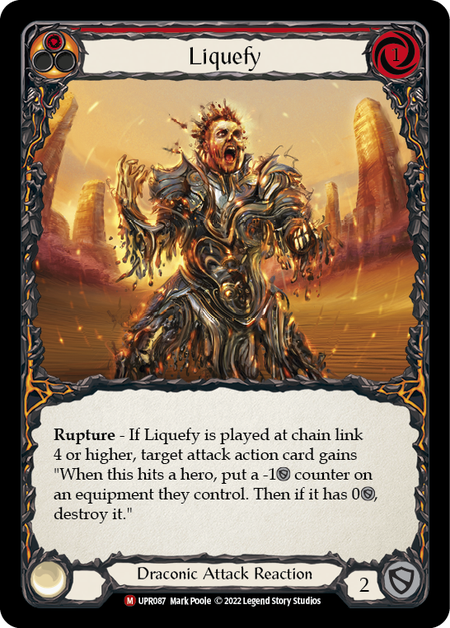 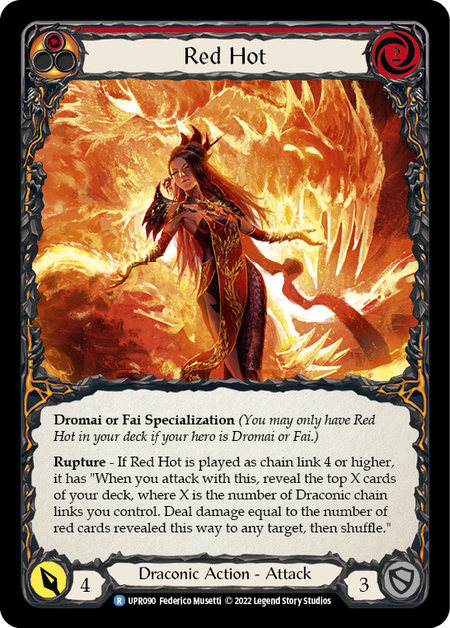 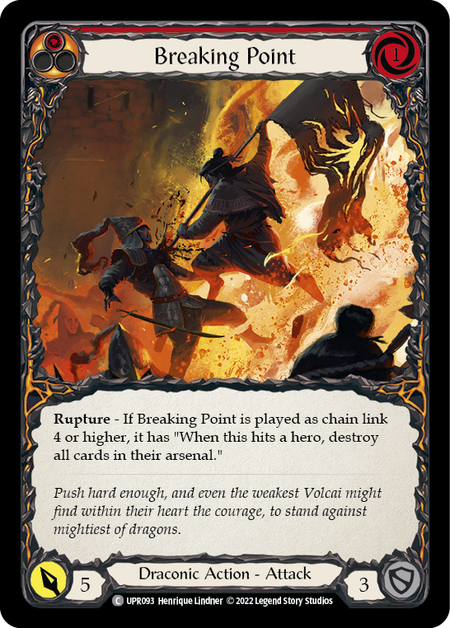 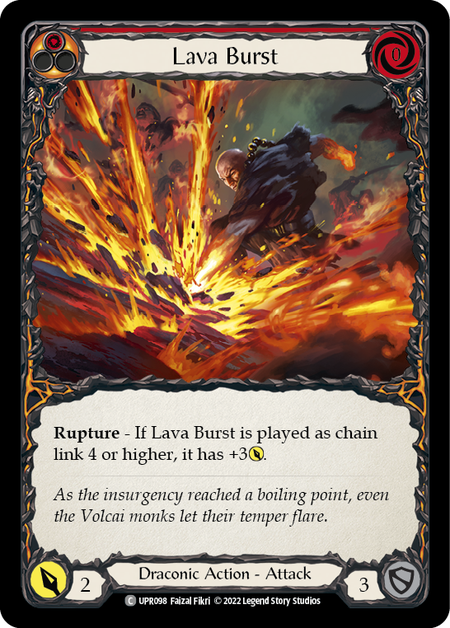 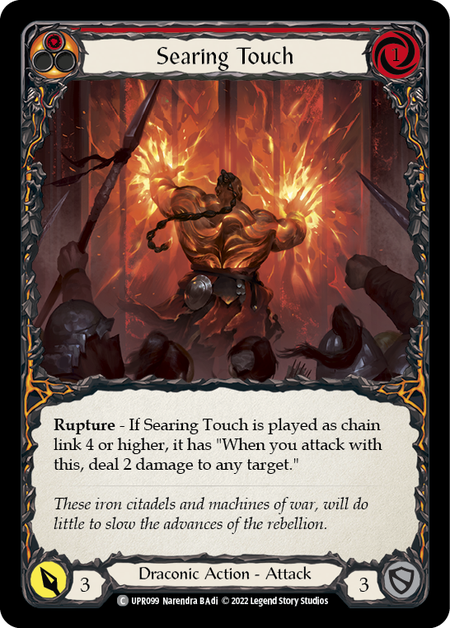 To expand on Tiger Stripe Shuko, the equipment is a huge upgrade to not just Fai but all Ninjas. Traditionally Ninja could always output damage that would compete with even the best Runeblade decks, however Ninja heroes suffered from the “Ranger problem” of having no good equipment to block with in order to turn the corner. With Tiger Stripe Shuko and Flamescale Furnace, Ninja players get access to quite an array of equipment option that would make even Runeblade players jealous.

Fai’s one downside is that you have to run multiple reds, meaning that it is tough on the resource curve. This can be mitigated in two ways: ensuring you run a maximal amount of 0 cost cards, while minimizing the amount of resource-intensive cards in your list, such as the powerful staple Command and Conquer. Requiring a large amount of red-line cards also means that Fai will suffer quite heavily against Frostbites. Frostbite traditionally only taxes about ⅓ of a card in a deck full of blue pitch cards, but in a deck that is primarily red-line it can demand an entire card!

The Illusionist class has been a hot topic ever since it was first released in Monarch in the form of Prism. The idea of auras and permanent cards that were able to carry damage across turn cycles immediately caught the attention of theory-crafters and deckbuilders alike. The design of the traditional Illusionist class draws a player in one of two directions. The first, a dominating flurry of large, but susceptible, Illusionist attacks; the other, a more eloquent dance with pacifist auras, to both protect yourself while killing your opponent by a thousand cuts as you whittle down both their resolve and life total. Dromai continues the tradition of big Illusionist attacks, but instead of Spectra Shields and Light Illusionist auras, she wields the power of dragons!

Dromai’s hero ability gives her the ability to create Ash tokens, which is the foundation from which her army is built. In a very Draconic fashion, she follows the red-line dependence, where a hero ability is conditional on a red-line card pitch (pitch 1); meaning some of the more expensive dragons will not always be the easiest to cast. The cheaper dragons are a great tempo play, as the invocation to summon these dragons will fulfill Dromai’s hero ability, which immediately gives the dragons go again! Check out some of the powerhouse abilities of the dragons available to Dromai. 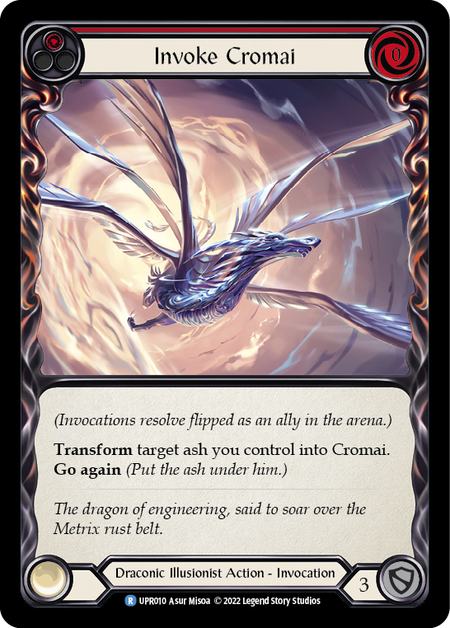 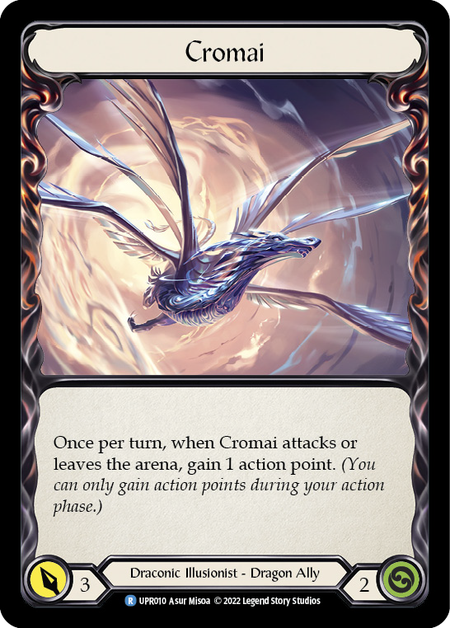 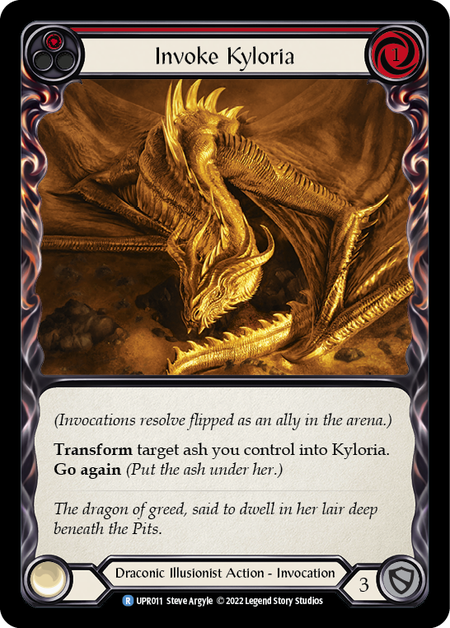 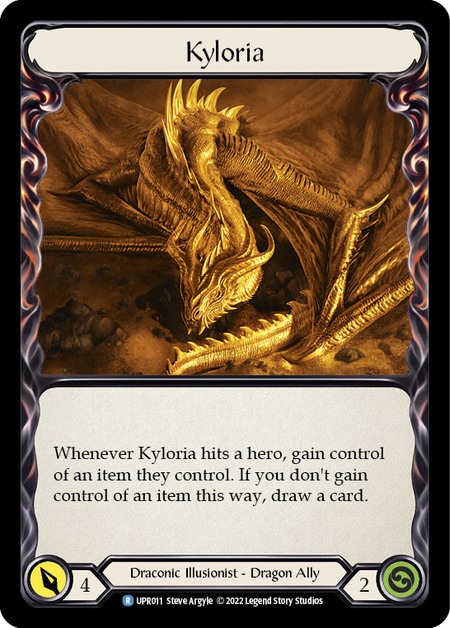 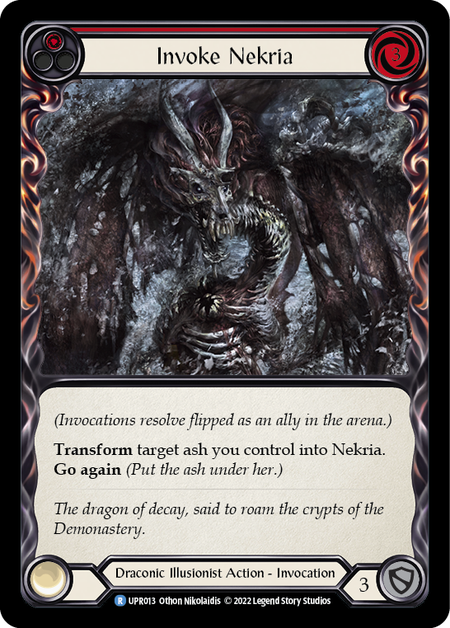 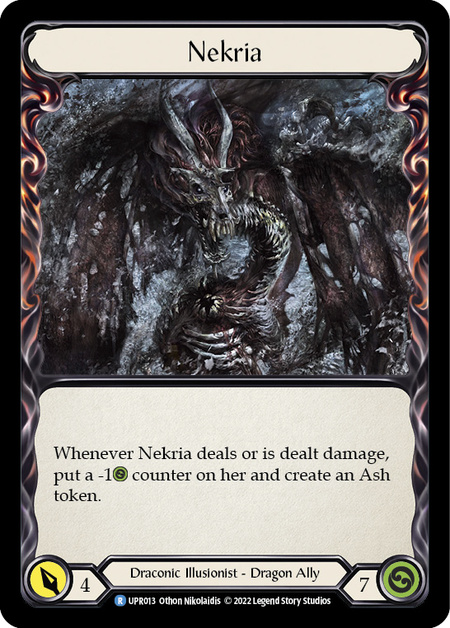 Cromai, Kyloria and Nekria are on my list for most powerful dragons in the set. Nekria functions as the engine of the deck allowing the generation of Ash both when it deals damage and when it takes damage, and with a thicc life total it can take quite a beating before expiring its ash-creating capability. Kyloria is everything I want in a card; cost-efficient, relevant on-hit effect, and a must-deal-with demanding an additional card on our opponent's turn. Although the card will likely not stick around for more than one turn, it’s a huge tempo generator much in the same way Genesis was for Prism. But unlike Genesis, this bad boy only costs a SINGLE resource!

Cromai is very innocuous at first glance, but good things often come in small packages, and Cromai is no exception. It costs no resources to play, giving all of your dragons go again, while also giving you an additional valuable action point in case your dragons get popped by their phantasm ability. However, the biggest bonus is when these action points get to stack. Time Snap Potion is one of the most powerful effects in the game and Cromai is functionally a recurring Time Snap Potion! This allows you to play extremely powerful non-attack actions that do not traditionally have go again, such as Tome of Fyendal which allows an insurmountable snowball of advantage, all made possible by this baby dragon. 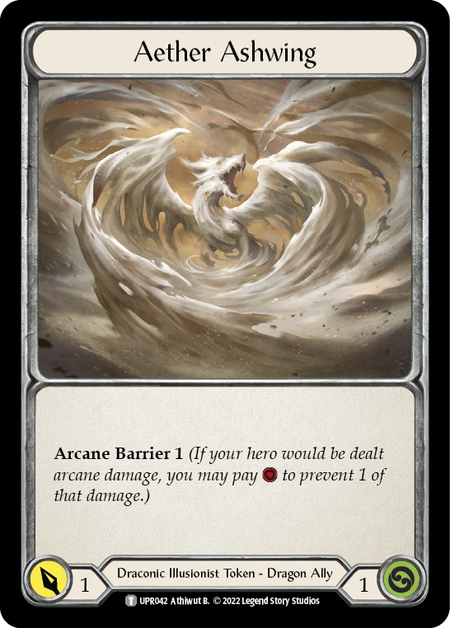 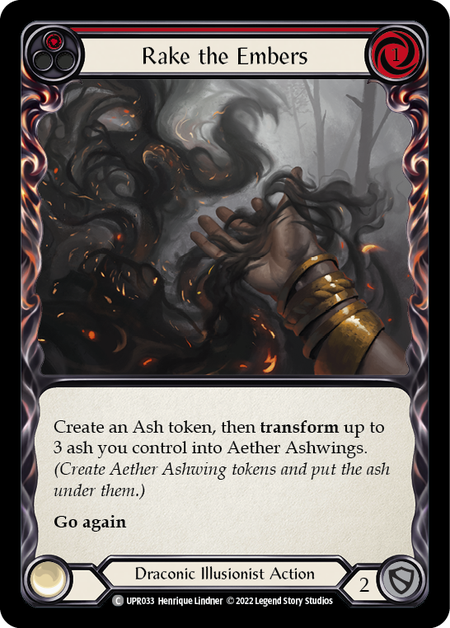 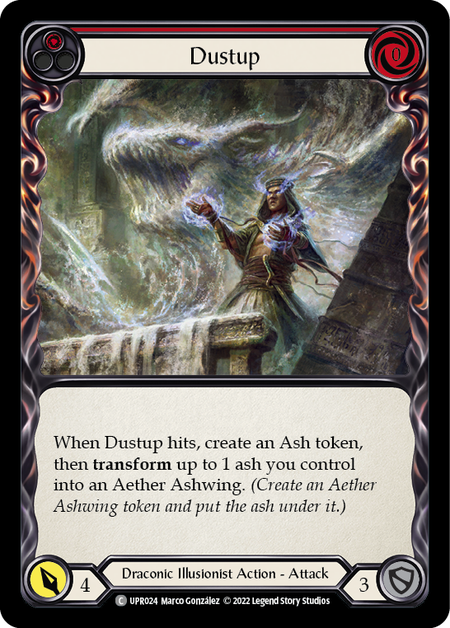 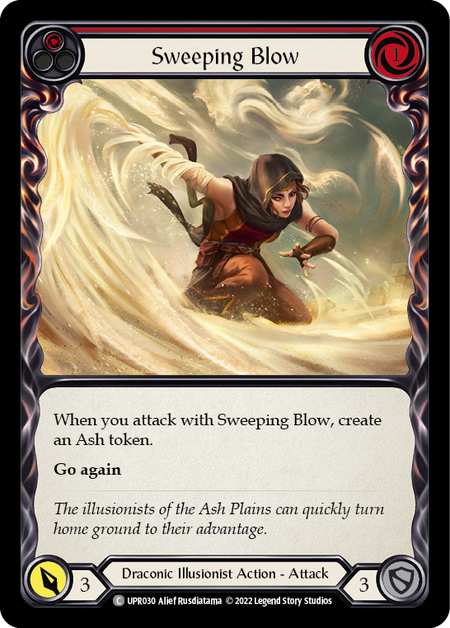 Past the dragons, the bread and butter of Dromai will fall in her ability to go wide with a small but fearsome army of Aether Ashwings. These are 1 attack, 1 health dragons that come with Arcane Barrier 1. They are very annoying to deal with as opponents will usually have to give up whole cards just to deal with these pesky threats. This often means they will build up over time, overwhelming your opponent 1 attack at a time. Rake the Embers, Dustup, and Sweeping Blow are all key enablers to accelerate the Ash production of Dromai, but always remember that everything tethered to an Ash has phantasm, and thus can leave you susceptible to a big block ending your turn before you intended. So be sure to sequence your turn correctly, attacking with your phantasm attacks last!

Iyslander is the newest Wizard on the scene, but unlike Kano, she takes much more of a control approach rather than a full combo kill. With the high damage output allotted to the Wizard class, combined with the defensive and disruptive capabilities of the Ice element, the possibilities for this hero are limitless.

Being able to play disruption effects halfway through an opponent’s turn is an incredibly annoying thorn in the side of any strategy. The most impactful card in Iyslander’s kit is Channel Lake Frigid from Tales of Aria, but that’s not to say the rest of the disruption package is weak. Any Blue Ice card that will come from the arsenal will create a pesky Frostbite under your opponent's control due to Iyslander's passive hero ability. This is often best against aggressive decks who will usually optimize their turn down to the last resource and an unexpected tax can make or break the difference between an extra attack or an arsenal pass. Couple that with Iyslander's newest weapon, Waning Moon, and you’re often looking at 5+ damage PLUS disruption all at instant speed during your opponent's turn! 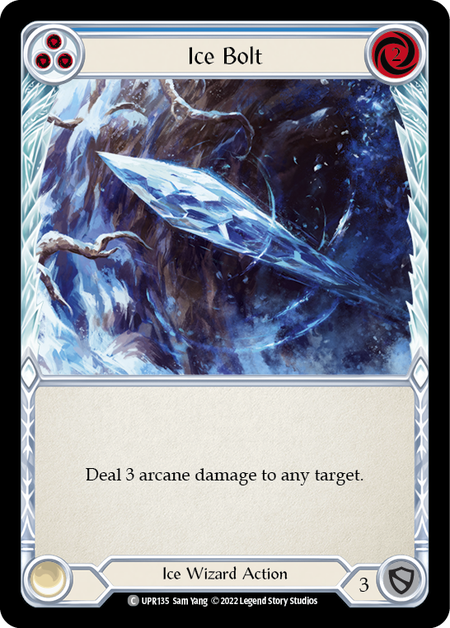 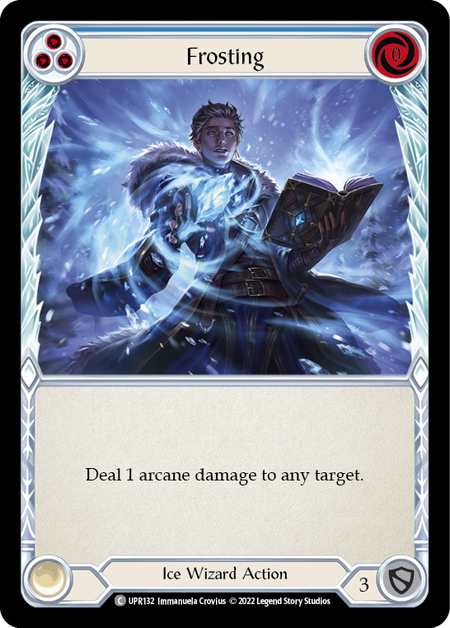 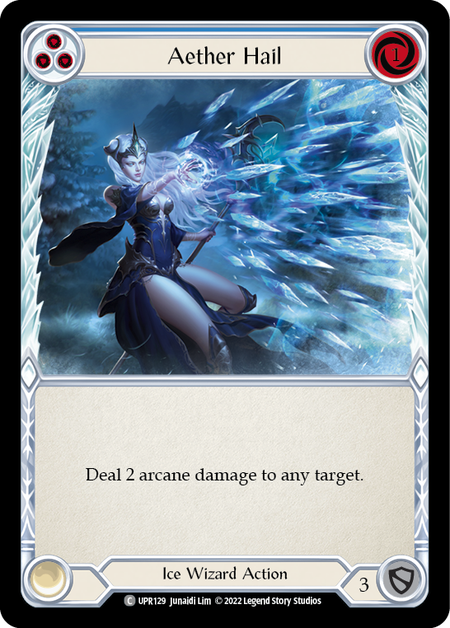 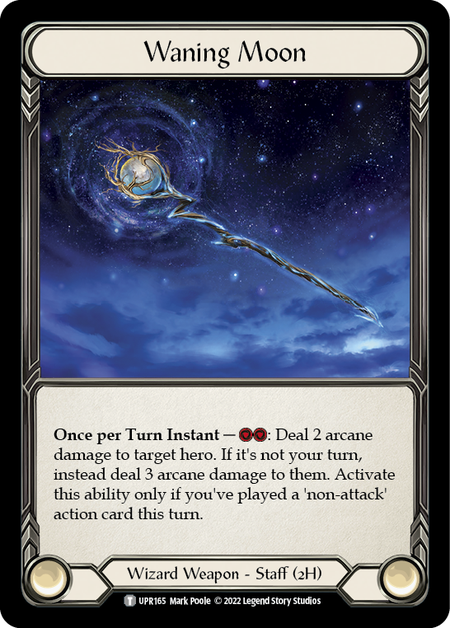 Coronet Peak is a card that I am most excited about. At first, you may be tempted to put it in an Oldhim deck, and you wouldn't necessarily be wrong, but the Guardian hero does not play the best at instant speed and is already quite choked up on action points. However, Iyslander has neither of these issues. When we look a little closer, Coronet Peak reminds us of another familiar card, Winter’s Bite. Now you may be asking why a blue Winter’s Bite for your action point is such an exciting card, so let me tell you. Like our Guardian friend Oldhim, most decks in Flesh and Blood do not play well at instant speed — and recall that we redraw up to 4 cards at the END of our turn. This means that if we construct a deck in such a way that we play exclusively during our opponent's turn, we will functionally limit the majority of our opponents to 3-card hands for the entirety of the game! 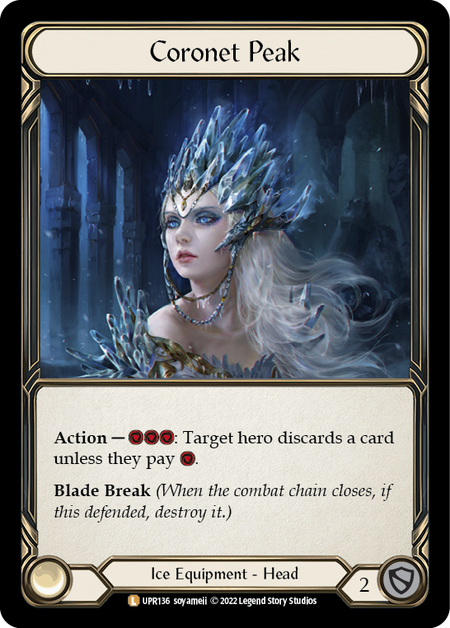 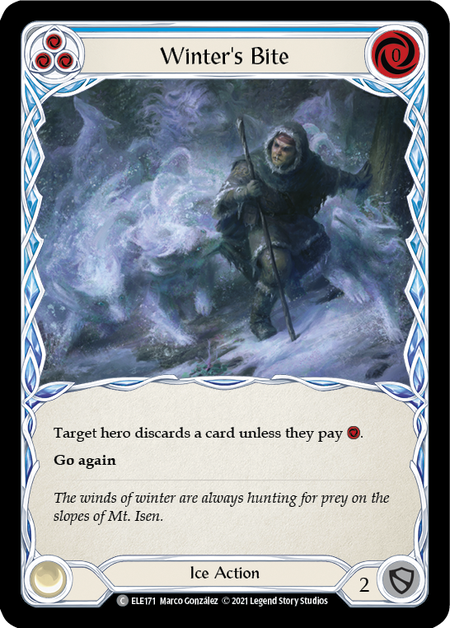 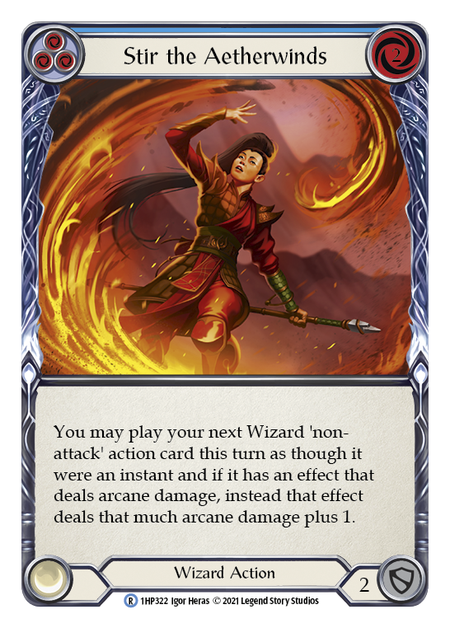 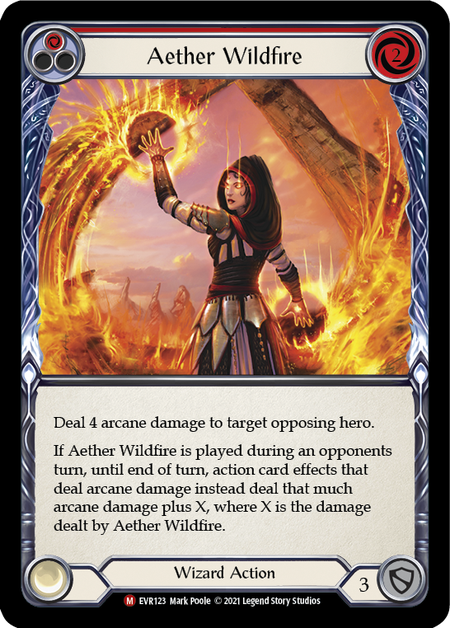 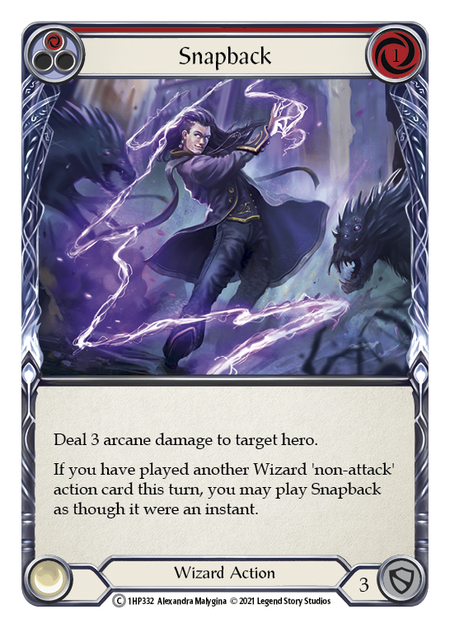 It doesn't stop there. Just because Iyslander has the ability to play the traditional defensive game plan that we’ve come to know from Ice heroes, it doesn't mean that she can't end the game in flurry of spells. With a blue Stir the Aetherwinds in arsenal, and a Aether Wildfire and red Snapback in hand, you can deal upwards of 16+ arcane damage depending on your choice of equipment and staff!

At the time of writing this article we are in the midst of the pre-release season and I am eagerly anticipating the day I can get my hands on these cards. I'm not sure how many of my ideas will come to fruition, but I have no doubt that these Uprising heroes will become a staple of metagames around the world. Whether you want to dominate your local metagame, or take your game to the next level at your nearest Calling, a mastery of these 3 heroes will be a must! I hope you enjoyed this article and are enjoying this latest set. Stay happy and healthy!

Tariq Patel is a competitive Flesh and Blood player and author of content relating to gameplay and strategy. The opinions expressed in the above article are his own and do not necessarily reflect the views of Legend Story Studios.