We're pleased to welcome Yichin Liu as a guest writer for the 2022 National Championships season! Yichin is a Level 2 FAB judge, one-third of the OK&Y podcast, and is known for his community involvement as MalZenith, writing articles and creating guides for new players. This is the second in his four-part series analyzing the developing Classic Constructed metagame at the 2022 National Championships!

Hello everyone, and welcome to the second of a four-part series where we’ll be bringing you some in-depth analysis of the results and takeaways of this year’s Nationals season. This week saw another batch of Nationals events in Canada, Italy, Spain, UK, Bulgaria, Croatia, Czechia, Finland, Portugal, and Romania. We already see a number of major shifts in the metagame as everyone looks to get settled for the winter, with Oldhim at the top of the mountain and several other heroes looking to challenge his throne. Let’s get started! 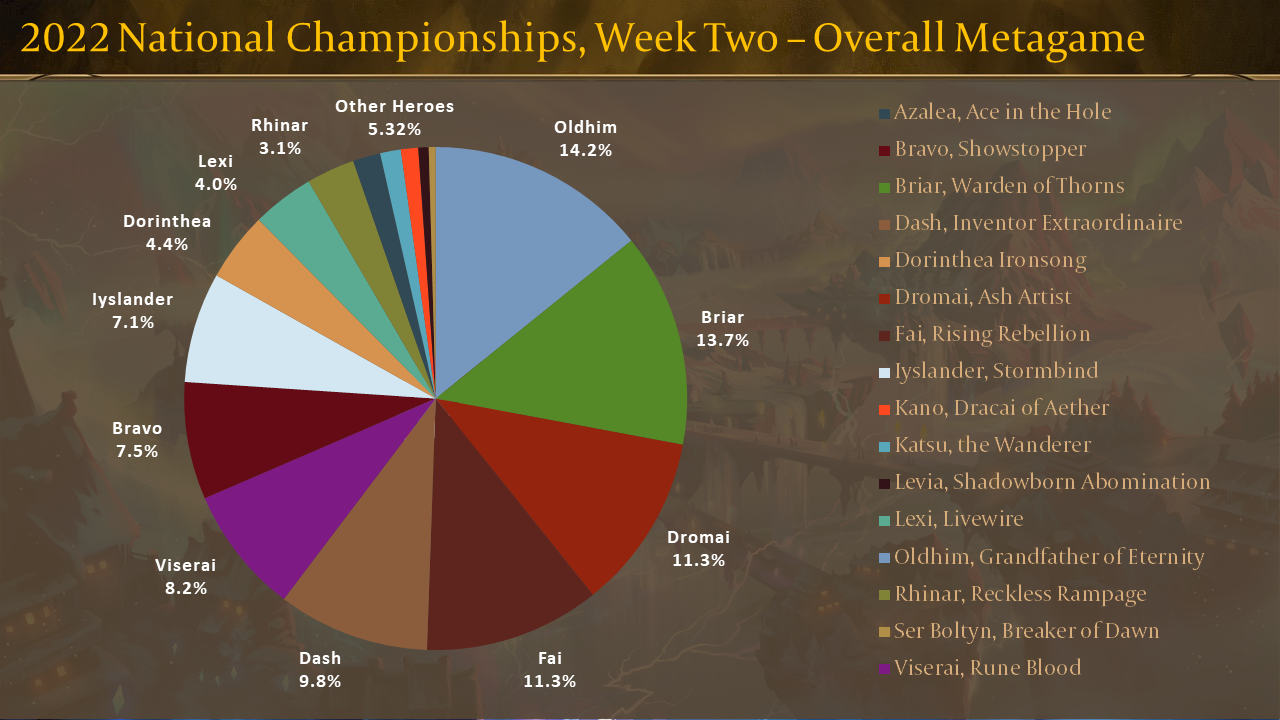 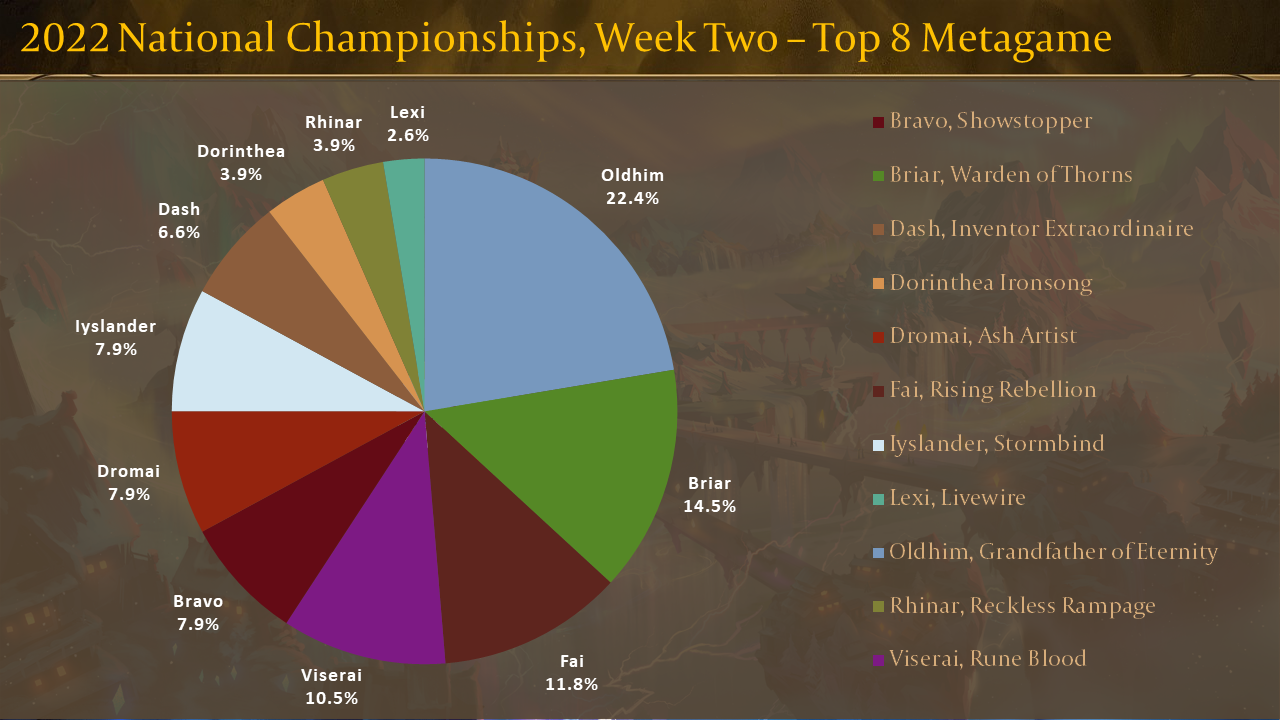 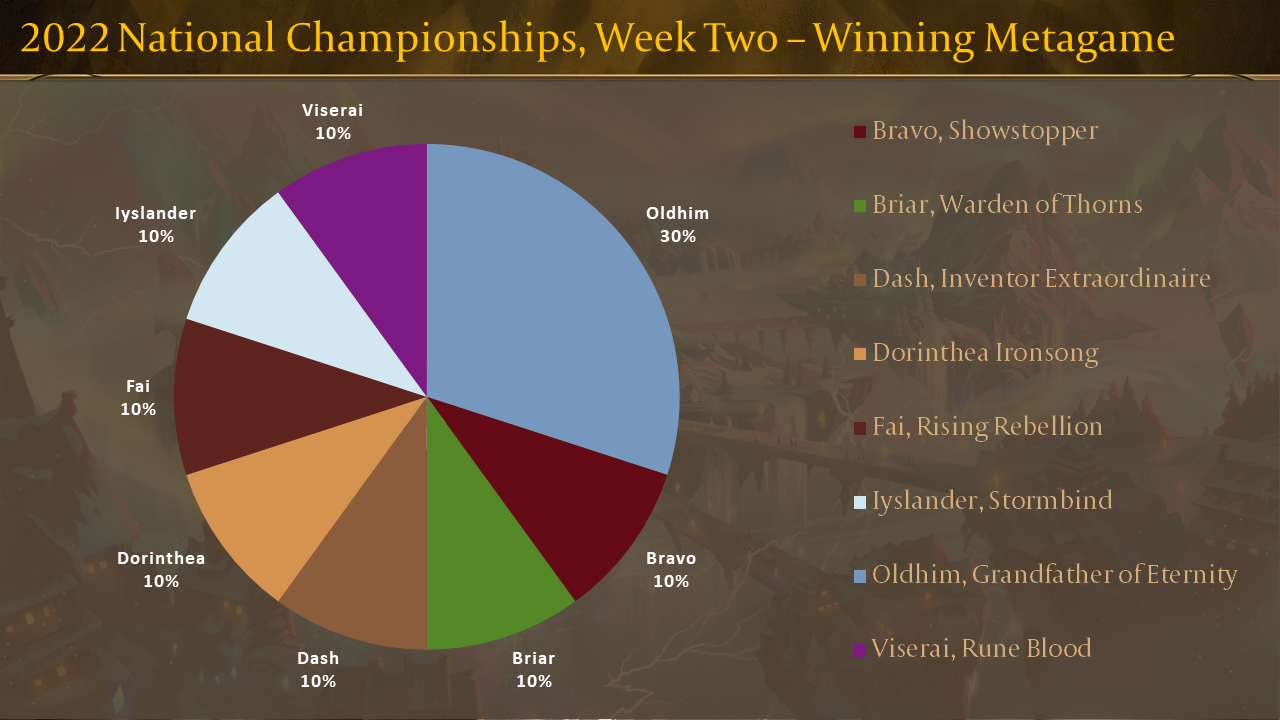 Let’s start with the major shifts in the overall metagame distribution. We see a couple of major shifts in terms of hero prevalence this week, with significant increases in the proportion of players on Dash, Dromai, Fai, and Oldhim. Oldhim has had the biggest shift, taking up the top metagame spot as expected due to his performance last week. Briar, Dorinthea, Lexi, and Viserai have had significant drops in popularity to make up for these changes, with Viserai jumping from just about 13% of the field to just over 8%. Of course, many of these changes are also significantly affected by regional popularity and local metagames, which we’ll get into a later in the article.

Among winners, we have a wide spread of heroes claiming their national championship title this week. Oldhim was the only hero that claimed multiple wins, with most of the other major forces in the metagame claiming their own share of the championship pie. As with last time, we don’t have nearly enough data points in the winner’s side of the field to come to any major conclusions other than “Oldhim is strong”, so let’s take a look at the all-important Top 8 conversion rate.

With 451 players and 76 Top 8 slots (including the Top 4 cut from Romania’s smaller Nationals event), the average conversion rate was 16.8%. In other words, heroes above a 16.8% Top 8 conversion rate can be said to be performing better than average. Our highest conversion rate this week was Oldhim, though his conversion rate of 26.5% has actually dropped from last week’s whopping conversion rate of 45.8%. We can assume this is explainable to two main factors: more players are playing Oldhim, meaning that the pool of Oldhim players are more likely to include those who have only recently picked him up and are less familiar with his play patterns; and more players are prepared for Oldhim. That doesn’t mean that you should expect Oldhim’s popularity to drop off any time soon - in fact, players should be preparing for the Oldhim matchup extensively - but it does indicate that the Oldhim may not be the unmovable shield that many players expect.

Following Oldhim in Top 8 conversion are two small surprises: Rhinar and Viserai. Viserai is back in force after a relatively weak showing last week, and Rhinar continues to surprise specific metagames by putting his pilots in top positions. After that, we have Iyslander floating at a respectable 18.75% conversion, with three other heroes - Bravo, Briar, and Fai - making up the rest of the above-average performers this week. Like Viserai, Fai has also made a bit of a comeback in popularity and success this week, but as we’ll go into a little later, regional metagames do make a dramatic difference in what finds success.

Now let’s start scrutinizing our individual data points. We start out by taking a look at what sort of Ice decks are winning this week; Oldhim, the main Ice deck in question, hasn’t had any major changes since last week. However, it’s worth highlighting that the more aggressive decks - such as the one piloted to victory by Tariq Patel in Canada’s Nationals - are the ones finding more victories. There are some minor variations to the main lists, with Croatia’s winner Kristian Čurla utilizing Oldhim’s arsenal for more than just Crown of Seeds with Polar Blast and Tome of Harvests to dig for impactful attacks or fix an all-blue hand, or Mario Abrantes’ list which utilizes a few more defensive cards like blue Brothers in Arms and blue Staunch Response to give it the edge in the mirror match. Iyslander remains a stellar performer and a significant force in the metagame, with recent decklists such as Mikko Airaksinen’s list that won Finland’s National Championship utilizing tried-and-true tactics of whittling an opponent down and finishing them off using some combination of Freezing Point, Ice Eternal, and/or Frost Hexes. 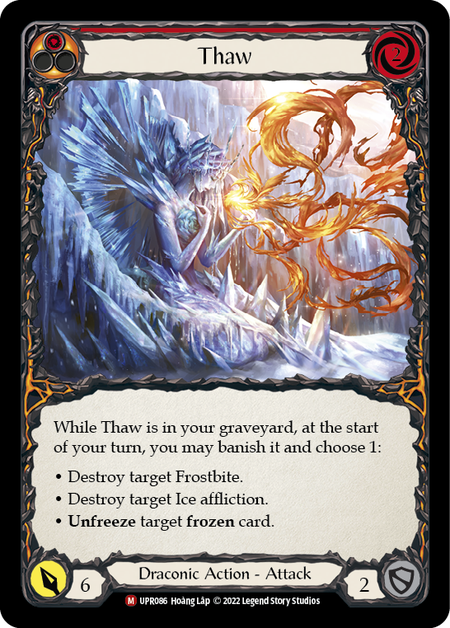 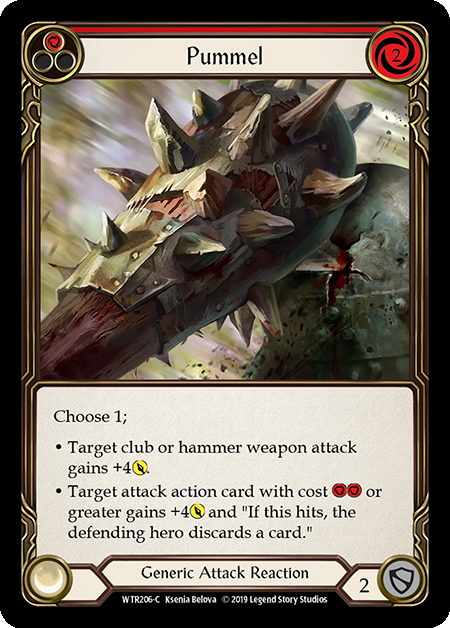 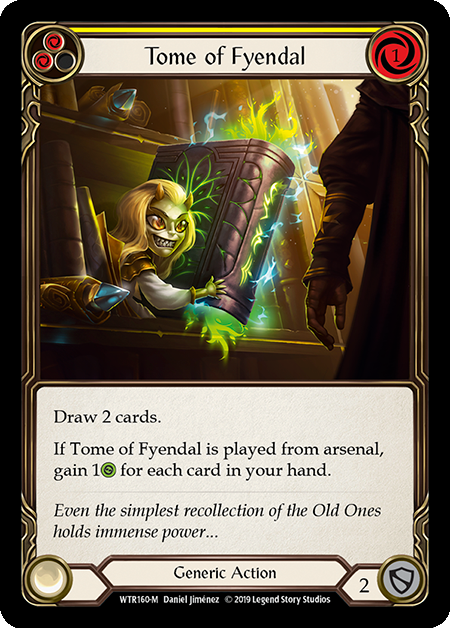 It’s safe to say that we’re in an Ice-heavy metagame, but that doesn’t mean that all other decks are being stopped cold in their tracks, either. With Oldhim firmly positioned as the deck to beat, and Iyslander as a strong pick, what sorts of decks are finding success against these two decks? The answer, at least from the big picture data, is, “It varies.” We see events where aggro decks can overcome high concentrations of ice heroes and still do well (such as in the UK), and events where Ice decks completely dominate the aggressive fields, knocking them out of the Top 8 with impunity (such as in Canada). Midrange and setup decks like Rhinar and Bravo have had some pockets of success as well, with events big and small showing the presence of decks that run at a more measured pace. But what sorts of strategies are they employing in their ice matchups?

If we look at individual decks, we can start seeing a more nuanced picture. Let’s take George Rodger’s Fai deck, for example. Rodger overcame low expectations from Fai and beat not one, but two Oldhims in the Top 8 in order to take home the UK National Championship. Rodgers’ and other successful Fai decks have an alternate game plan for the Ice heroes, preferring to find opportunities to set up for high-damaging turns while also running a number of strong on-hit effects that help do so. Take the Tempo and Snatch are two important cards for the matchup, with these decks often siding in Mask of the Pouncing Lynx to force through damage via searching for cards like Lava Burst or Salt the Wound whenever they sense that the opposing ice deck wants to keep cards. In other words, the threat of these myriad on-hit triggers either forces the opposing deck to block out - thus helping the aggro deck maintain tempo and set up turns with a card in arsenal regardless - or punish the opposing deck for being too greedy.

Viserai’s recent resurgence has signs of a different line of thought. Max Dieckmann, Spain’s newly crowned National Champion, overcame Pro Tour winner Pablo Pintor’s Iyslander and another Oldhim with a list that focuses on the Belittle/Minnowism dyad, abandoning less-consistent Viserai staples Sonata Arcanix and Tome of the Arknight. Joining it is a lone copy of Tome of Fyendal, a less common sight in most Viserai lists but a fantastic way to replenish the hand in conjunction with Spellbound Creepers. Rather than focusing on ways to create space and avoid major disruption like Fai, this version of Viserai is more focused fighting through disruption by finding additional ways to draw cards without an on-hit trigger. Employing Belittle’s ability to tutor for an additional blue in hand is a strategy as old as Oldhim himself, and it is showing to be successful as a way to fight through the extra frostbites from the ice heroes. The deck can also pivot to an alternative “OTK” (one-turn kill) strategy when it realizes that it’s against a more defensive Ice deck, choosing to use the slower pace of the game to its advantage by building up a critical mass of Runechants via Read the Runes and Runeblood Incantation to annihilate the opponent in one fell swoop.

If you want to root for an underdog hero this season, Rhinar seems to be one of the ones with the biggest chance of surprising everyone. Most of Rhinar’s success this week can be attributed to Ian Smith and Clay DeAngeles’s success in Canada’s Nationals, where the Brute duo piloted the same Rhinar list to two Top 8 finishes in a breakout moment for many viewers. This version of Rhinar notably runs Tome of Fyendal, a card that hasn’t been seen in many top Rhinar lists for some time but works well with a bit of luck in conjunction with a high Scabskin Leathers roll. Like Viserai mentioned above, it appears that its best use is finding ways to extend Rhinar’s current turn to plow through a few Frostbites while refilling the hand (and gaining a bit of life), highly incentivizing the opponent to block out a high-damage turn or risk losing a significant amount of life. Scabskin Leathers, while risky, is also a naturally strong way to play around cards like Hypothermia or Spinal Crush, giving Rhinar a good chance of presenting a bit of damage despite disruption.

How your hero of choice might approach fighting against the Ice heroes will largely depend on the hero and what cards are available in their cardpool. Ice decks shine best when they are allowed to control the tempo of the game. When they’re in control, it can be a struggle to even present enough damage to make a dent in your opponent’s defenses. How, then, do you reverse the situation and force them on the back foot? The strategies vary by deck and playstyle. Based on what’s been successful so far, it seems the best game plans are:

Come in with some disruption yourself. Both Oldhim and Iyslander heavily rely on having a card to arsenal during their turn, and finding ways to get rid of it will easily help swing tempo back in your favor. Using some of the generic discard available like Pummel, or class-specific discard effects like Consuming Volition or Crippling Crush can force them in an uncomfortable position where they are forced to block or lose their hand anyway.

This information is mostly derived from the data presented, so individual experiences may vary. What is clearly important this season, however, is the importance of learning your gameplan into each matchup. With a wider spread of deck types and strategies than ever before, knowing how your strategy will change into each one will dramatically affect your individual performance. Racing or fatiguing every matchup may not always be an option; certain cards that may seem innocuous are must-blocks, while others that seem threatening may not affect you all that much; sideboarding certain cards in a matchup that has historically worked one way may not work out as expected. No matter the case, preparation is key, and careful preparation and deck choice can go a long way to “beat” whatever numbers are presented in the data. To those of you who have their Nationals to come, good luck!

I’ve included the overall data for the last two weeks below, but I would not recommend reading too much into it - the data is distributed over many localized events and, as Nationals season continues, over many weeks. As a result, there aren't too many strong trends we can read into this, but those of you just tuning in might find it useful as a general picture of the Uprising Nationals Season across the world! 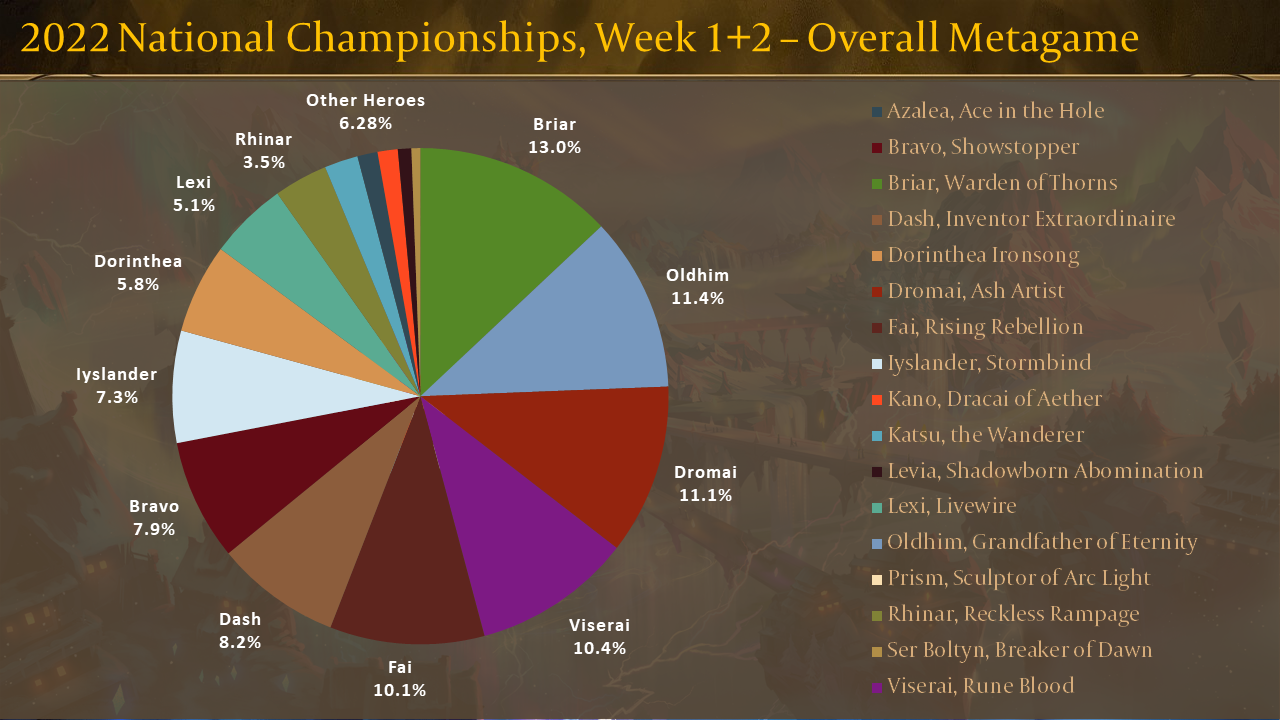 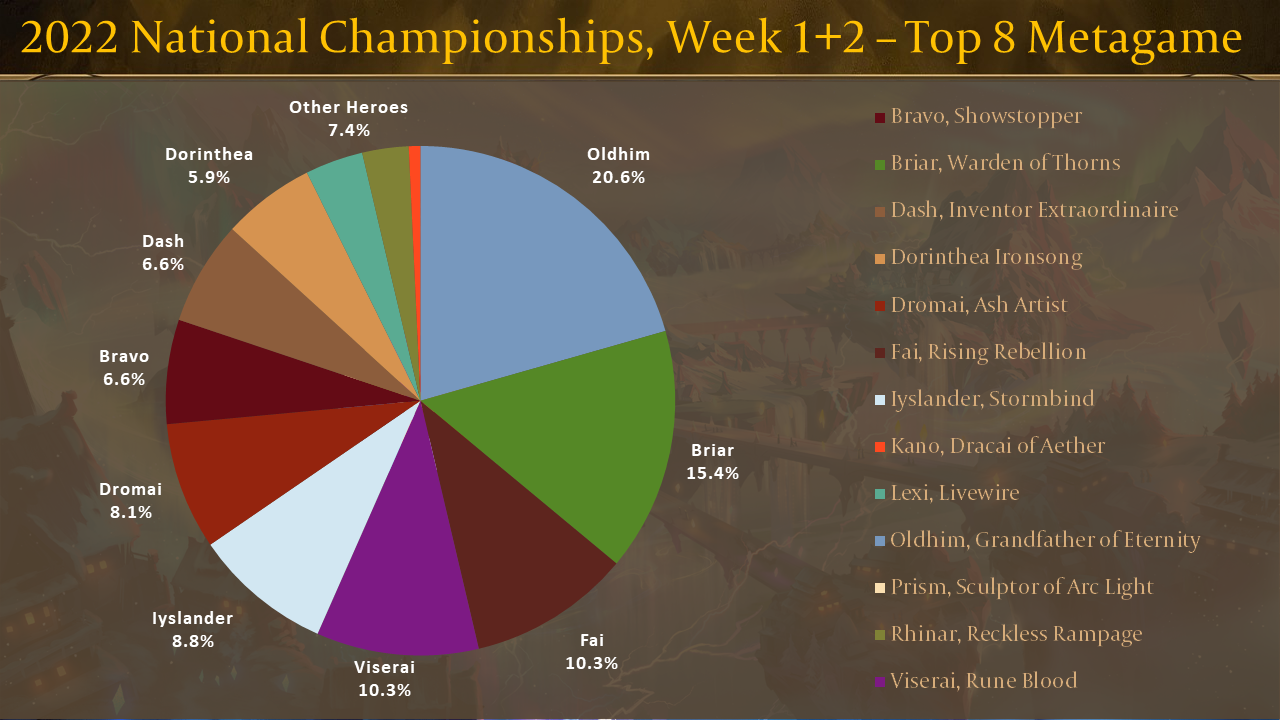 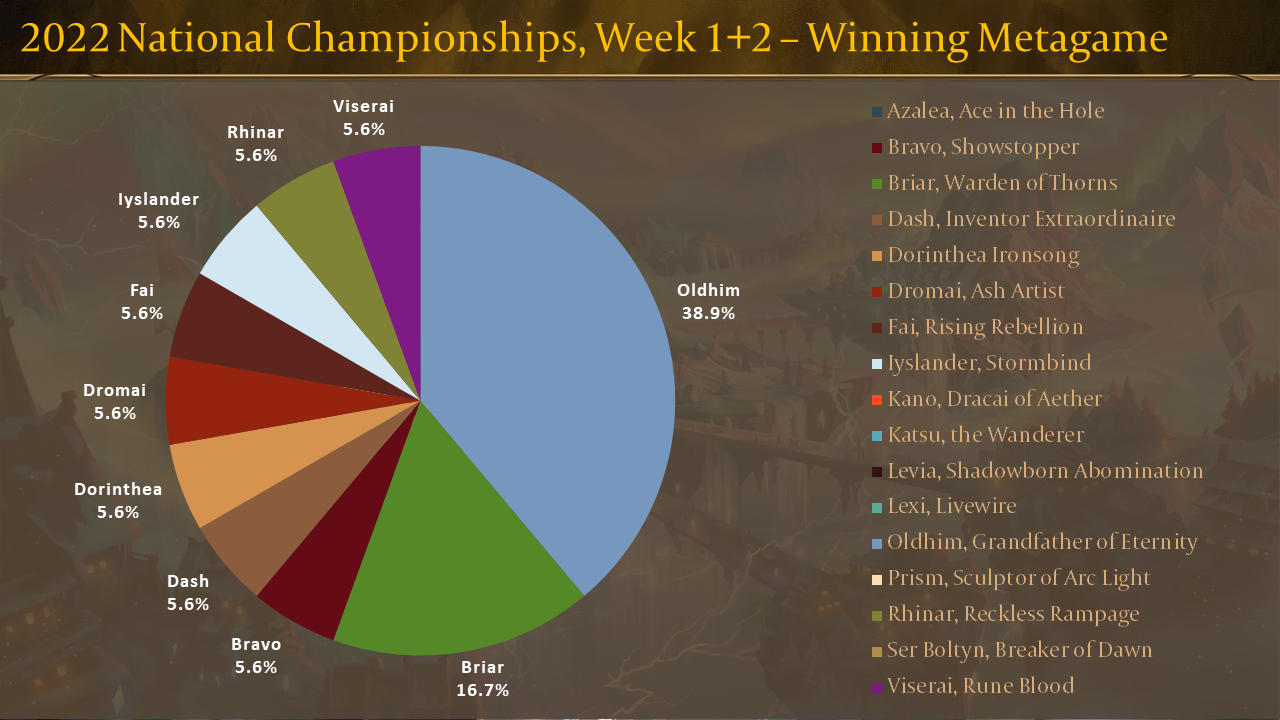