We're pleased to welcome Yichin Liu as a guest writer for the 2022 National Championships season! Yichin is a Level 2 FAB judge, one-third of the OK&Y podcast, and is known for his community involvement as MalZenith, writing articles and creating guides for new players. This is the first in his four-part series analyzing the developing Classic Constructed metagame at the 2022 National Championships!

Hello everyone, and welcome to the first of a four-part series where we’ll be bringing you some in-depth analysis of the results and takeaways of this year’s Nationals season. The 2022 Nationals season has started off with a bang, with the results from several small to mid-sized events offering a taste of the metagame to come in the next few weeks. Australia, France, Austria, Hungary, Lithuania, Malaysia, Norway, Slovenia, and Vietnam all held their respective Nationals competitions this weekend, with many more to come! This article will be focusing on the Classic Constructed metagame, which means that, while exciting, Vietnam’s Blitz-format Nationals will not be included in this data set.

First off, a disclaimer: data isn’t destiny. Just because it might look like your favorite hero isn’t doing well, has a poor conversion rate, or other discouraging statistic, doesn’t necessarily mean that you won’t be able to find success. Ideally, players should be using this data to drive deck and sideboard decisions, to figure out what the metagame looks like, and to help guide them to identifying ways to combat the top decks. That being said, let’s dive right in! 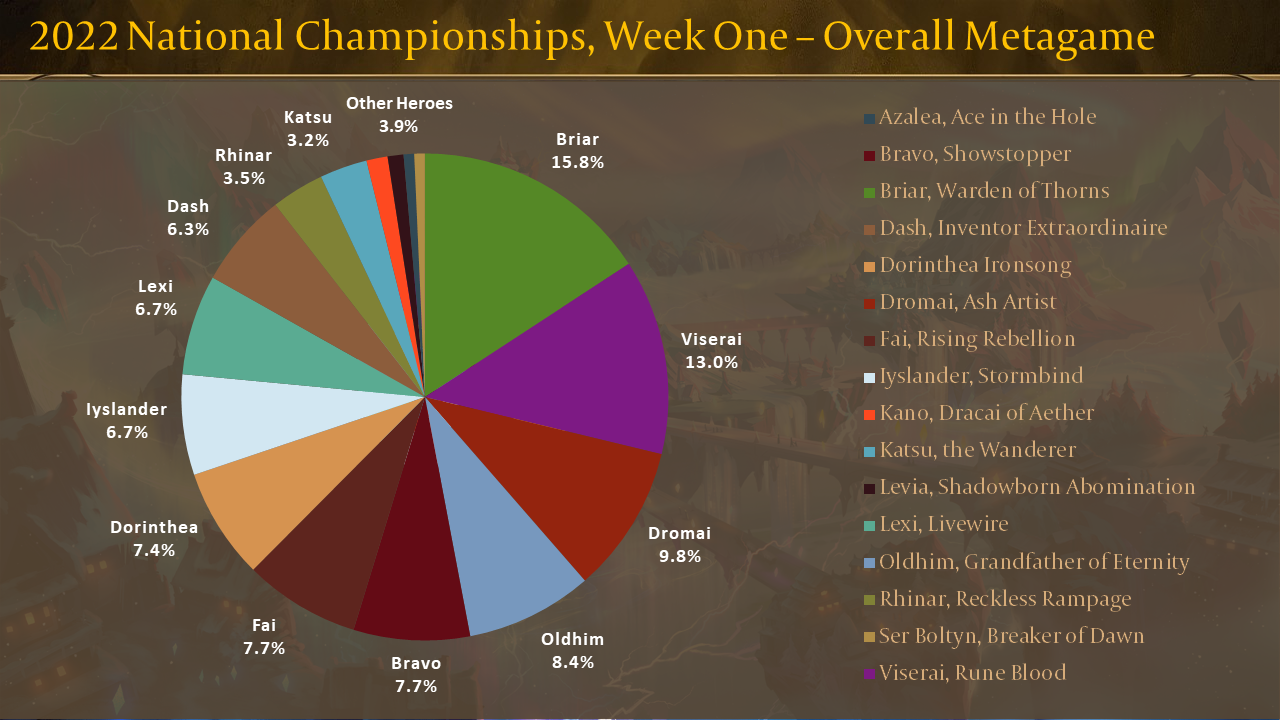 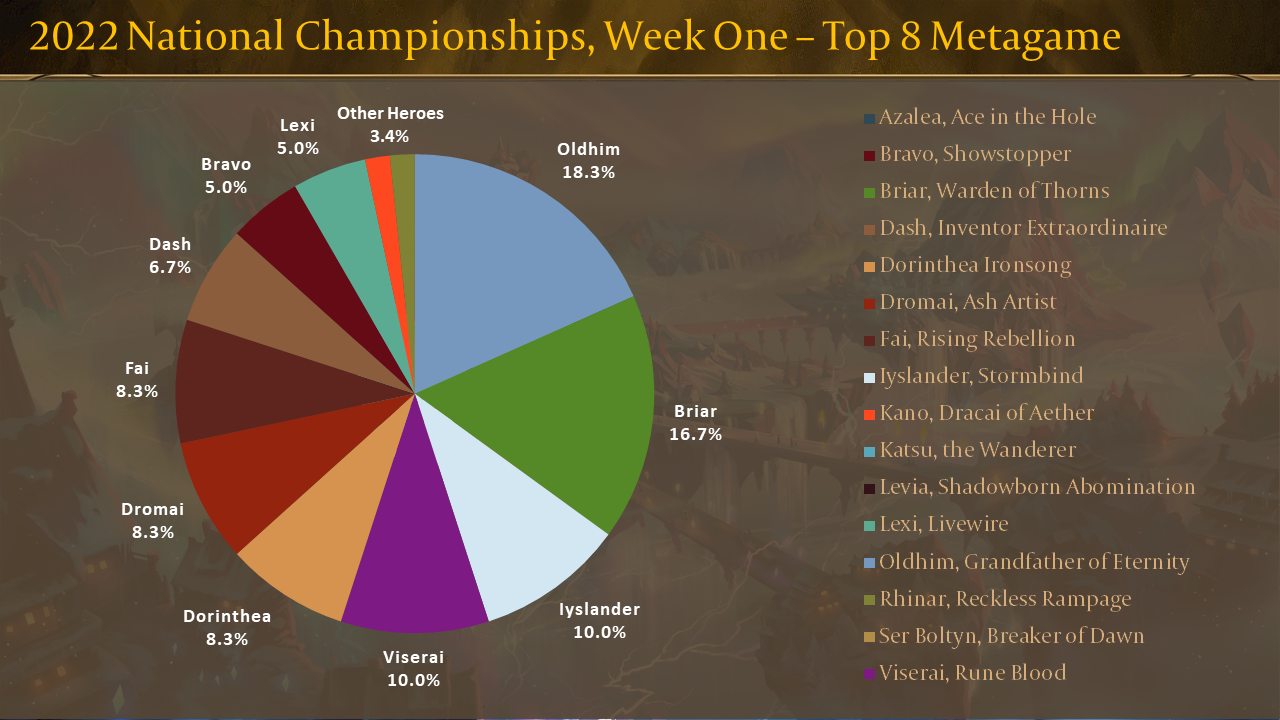 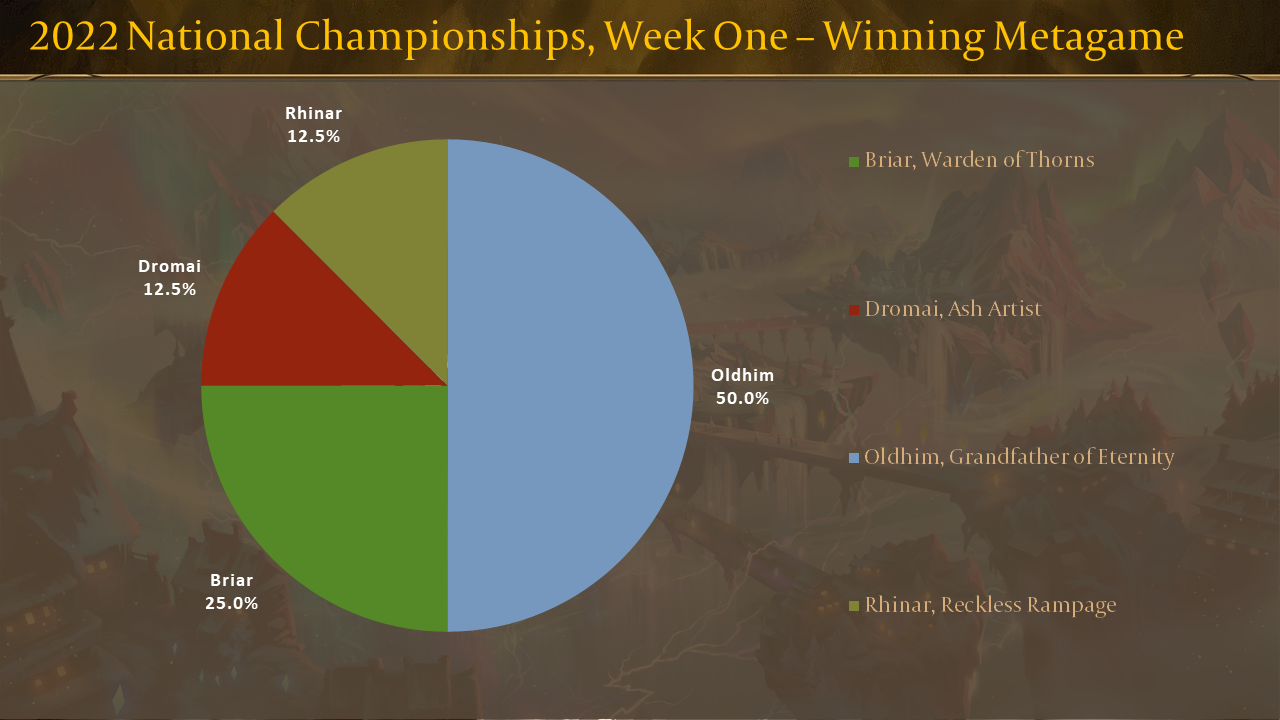 Perhaps a little surprisingly, the overall metagame has not dramatically shifted with Prism’s departure - Runeblade is still one of the most popular classes, with several other candidates all rushing to fill in the Prism-sized hole in the pie charts (and our hearts). Many players are experimenting with heroes that have traditionally had a poor matchup into Prism, eager to see if they can carve out a space for their favorite hero now that their biggest predator has gone. After Briar and Viserai, our next most popular heroes seem to be roughly evenly split between Dromai, Dorinthea, Bravo, Oldhim, and Fai. Of course, if you notice the other two graphs, it’s clear that one of these heroes is standing out from the rest. The old man of the mountain, Oldhim, has come to reclaim his throne as Guardian of the Metagame. Without even looking at the conversion rate graphs, his presence is clear - four Nationals wins and a decent chunk of the Top 8s despite making up a comparatively small amount of the field. Let’s take a look at the numbers:

One of our usual indicators of power, Win Conversion, is a little sparse on data points at the moment, so instead, let’s take a look at Top 8 Conversion. Based on some quick calculations, our average conversion rate is 18.75% - in other words, if a hero has a conversion rate higher than 18.75%, they can be considered to be doing better than average and getting their pilots into Top 8 at a higher rate than expected. After Oldhim’s impressive conversion rate (a whopping 45.83%!), our next highest conversion rate comes from Iyslander, who boasts an impressive 31.58% conversion rate, well above average. It’s not like either hero is particularly underplayed, either; the icy duo stand about in the middle of the pack in terms of representation. Now that they no longer have to contend with Prism, the two heroes are free to feast on their natural prey: aggressive decks that have yet to learn that keeping four cards in hand is a luxury they can no longer afford.

From there, the next five heroes all have an approximately twenty-something percent conversion rate: Kano, Dorinthea, Dash, Briar, and Fai. Kano is a bit of an outlier here, with only four players representing the Dracai of Aether in their Nationals event. His single Top 8 appearance occurred in Australia, in a field prepared for arcane damage and full of Runeblades and Iyslanders - an impressive feat indeed! Making up the rest of higher-than-average conversions are a smattering of decks that are either naturally aggressive or can be played very aggressively; Oldhim and Iyslander matchup aside, the aggressive decks are still finding enough success to do well and place highly in the metagame. This may change as more players adapt into finding ways to beat Oldhim and Iyslander as the metagame evolves.

Microdata: Diving Deep into the Ice

Let’s turn our attention to some topics that can’t properly be expressed with the “big picture” data currently presented - local metagames and how players have adapted their decks. While the data above can be used as a general picture of how the overall metagame performs, we can look at individual countries’ examples for more nuanced assumptions that might clue us in on how the global metagame might develop. 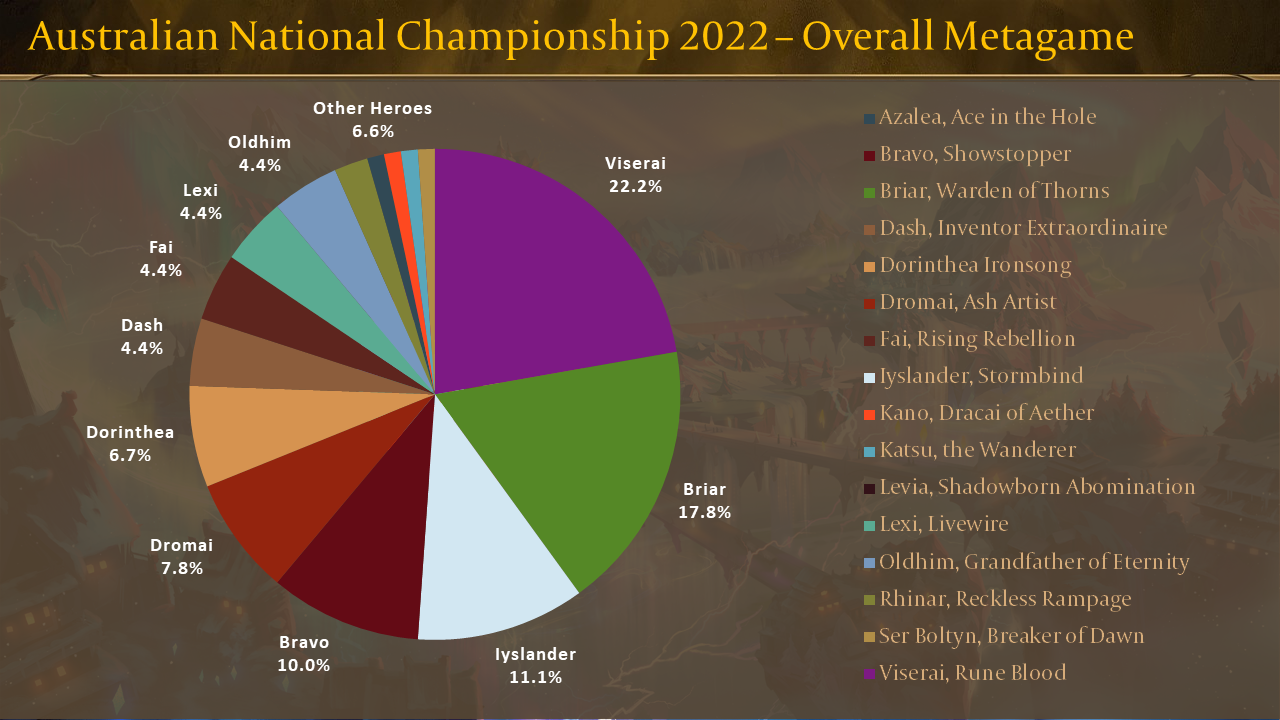 Take our largest event, Australia. Australia was somewhat unique in that Oldhim was significantly underrepresented in the metagame, while Iyslander was overrepresented. Despite Viserai and Briar being the most popular heroes at the event, only a single Viserai made it into the Top 8. This suggests that Iyslander is a strong counter to the two Runeblades despite likely having a few other tough matchups herself. When comparing Iyslander’s metagame share with Runeblade’s Top 8 conversion rate on an event-by-event basis, you’ll note that this assumption becomes a general trend.

The same assumptions do not hold true for Oldhim, however. In certain events where Oldhim performed well, Runeblade did as well; for example, in the French Nationals. Oldhim’s metagame prevalence seems to have no general effect on how well Briar and Viserai did in the event; while it may be a favorable matchup for them, it perhaps may not be quite as unfavored as Iyslander’s matchup. However, Oldhim is still the best-performing hero based on our data. Like with Iyslander, we can assume that absent a strongly favorable matchup against the Runeblades, he is also strong against the rest of the field and a stellar contender in the post-Prism metagame overall.

In other words, if you expect a lot of Iyslander players in your upcoming Nationals event, you might want to think twice about playing Runeblade! Of course, Runeblade enthusiasts are welcome to prove me wrong and show that these hypotheses are completely off-base. Many of the Briar and Viserai lists this week were running more traditionally aggressive lists. If Iyslander and Oldhim’s metagame share rises, I expect that we’ll see the Belittle/Minnowism package added to decks as a cure for the common cold, as the ability to fetch additional resources by searching for a blue Minnowism is a great way to fight through disruption.

Some of the data regarding Oldhim also might be affected due to differences in playstyle among Oldhim players that non-Oldhim players aren’t expecting. Many of the best-performing Oldhims have adjusted their decks to be much more aggressive in the wake of Prism’s departure, utilizing a host of strong attacks backed up by go again attacks and Pummels. Even if lists may seem similar, the approach players take into the matchup can be a major deciding factor in who ultimately comes out on top. Nick Butcher, Australia’s National Champion, ran a deck with cards such as red and blue Pummel, red Zealous Belting, and red Glacial Footsteps, orienting Oldhim as an aggressive deck that aims to close out games quickly using strong attacks with the disruptive threats of Pummels and his usual on-hit effects to maintain tempo. Mohammed El Fardi and Kim Barroso, France’s finalists, both ran decks that had a similar principles of aggression, with El Fardi’s deck utilizing several go again attacks compared to Barroso’s choice of using non-attack pumps like Ice Quake to bring the beats. These new aggressive variants can catch players offguard if they expect a long and arduous game; those Remembrances won’t do you much good if you’re being Pummeled to death!

Amongst the other Top 8 finishers and winners, we see a variety of decks and builds doing well. Dromai has been doing a bit below average in terms of performance, but players have found success with two different variations. Herendi Balint, Hungary’s runner-up, has chosen a more aggressive Dromai list running a suite of 4-attack, 0-cost cards like Blaze Headlong and Dustup, while Adrian Fjell, Norway’s champion, focuses on a list with a more measured tempo with cards like Embermaw Cenipai and Erase Face to present large chunks of damage or disruption while remaining defensive. Where these lists perhaps differ is their gameplan into the Guardians; Dromai has has a decent amount of trouble winning against Guardian due to the amount of phantasm “poppers” (6-attack cards used for blocking and triggering phantasm). Brandt’s list focuses on aggression and less reliance on cards with Phantasm to force damage through, whereas Fjell’s list uses a more traditional gameplan of Ghostly Touch and Semblance to build up a large phantasm attacker over the course of the game, unleashing it to close out the game when Semblance and two other blue cards are drawn via careful pitch stacking.

Of course, I would be remiss if I failed to mention Rhinar’s winning deck at Malaysia Nationals, piloted by Nitya Kalaichelvan. One of her unique card choices for Rhinar is the innocuous Cadaverous Contraband, an excellent way to maintain tempo by recurring powerful non-attack actions like Bloodrush Bellow. Pairing with it is the inclusion of blue and yellow Pummels, Swing Big, and the usual Command and Conquer/Erase Face duo; making many turns present opportunities for disruption or value generation beyond just damage. In previous metagames, Rhinar is a hero that has gone underplayed due to difficulty finding reasons for aggressive decks to block his big swings. Kalaichelvan’s deck adds to that with Cadaverous Contraband as a great way to encourage the opponent to block or risk being threatened with yet another Bloodrush Bellow turn.

So, what are the main takeaways for players, with just one week of data? Right now, it seems that disruption is the name of the game: aggressive decks are doing reasonably well, but even those decks are choosing to run more disruptive choices in favor of all-out damage. Viserai decks are experimenting with Consuming Volition, for example. The heroes with the heaviest disruption are doing well in this metagame, namely Oldhim and Iyslander. Decks with a minimal amount of natural disruption in their deck, such as Rhinar and Dorinthea, will need to find other reasons to make the opponent block. Aggressive decks will need to look to maximize the damage they do on 2 or 3 card hands as well as 4 card hands, and midrange and control decks will need to maximize the value each attack can give them.

When it comes to playing your deck, you’ll need to plan out a secondary strategy when you draw your hand in case your first few actions run into some form of disruption. Having a fallback plan each turn will be key in this metagame, testing your ability to adapt to tough situations beyond deck construction. To those of you who have Nationals events in the next few weeks, good luck! We’ll be keeping a bird’s eye view of the results from here, and will be ready to talk about your country (and hopefully, your deck) in the weeks to come.