We're pleased to welcome Yichin Liu as a guest writer for the Road to Nationals season! Yichin is a Level 2 FAB judge, one-third of the OK&Y podcast, and is known for his community involvement as MalZenith, writing articles and creating guides for new players. He'll be bringing you a two-part series on the Road to Nationals metagame as it develops; this is part one, covering the first two weeks of the season!

Hello everyone! Hope everyone has been enjoying the last few weeks of Road to Nationals. Today we’re going to focus on breaking down and analyzing the data from the first few Road to Nationals events. The first few weeks of any new competitive season is an exciting time as players test their homebrews against each other and figure out what works, what doesn’t, and what proverbial horse to bet on in the race leading into Nationals season.

Let’s begin with the data, shall we? This first graph shows the proportion of players on each hero these last two weekends: 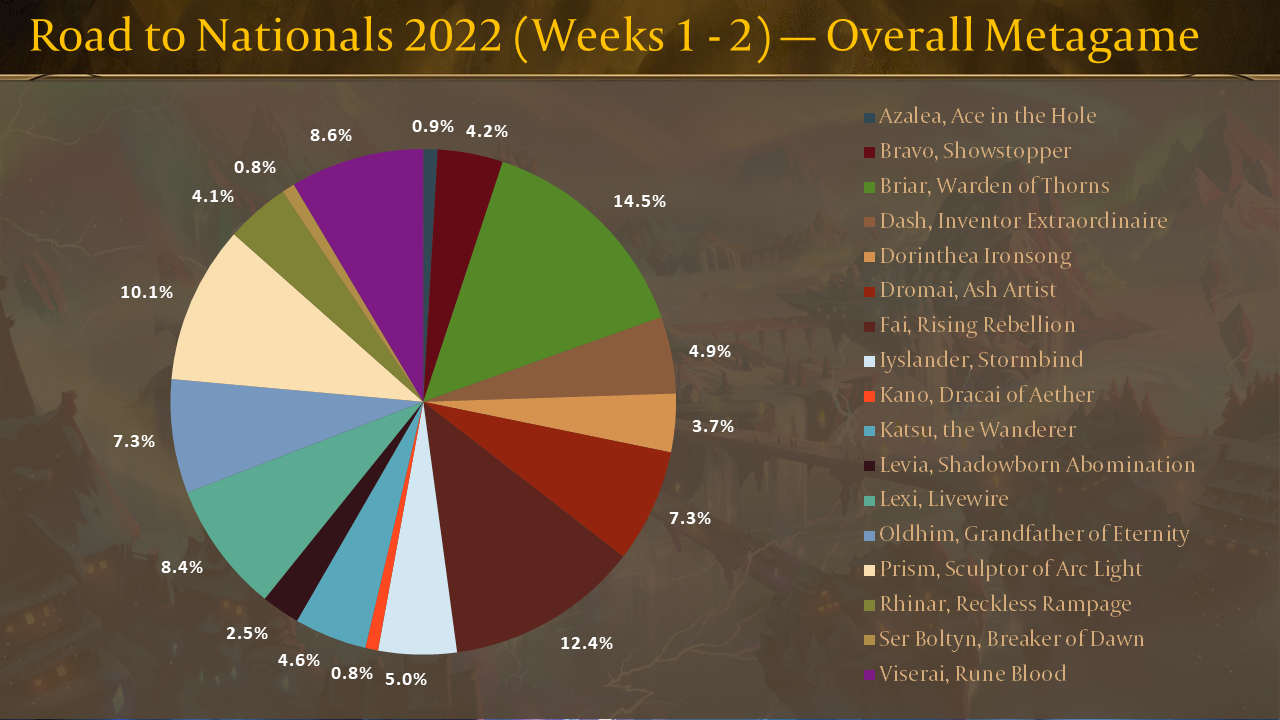 While this doesn’t tell us much about how each hero did, it does tell us how popular each hero was. We have our top three most popular heroes with more than 10% representation each: Briar, Fai, and Prism. Collectively, these heroes make up a little more than a third of the overall hero spread. Going forward, players should expect to one or more of these heroes several times during swiss rounds, making preparation for these matchups important.

Let’s take a look at our Top 8 and Winning proportion graphs: 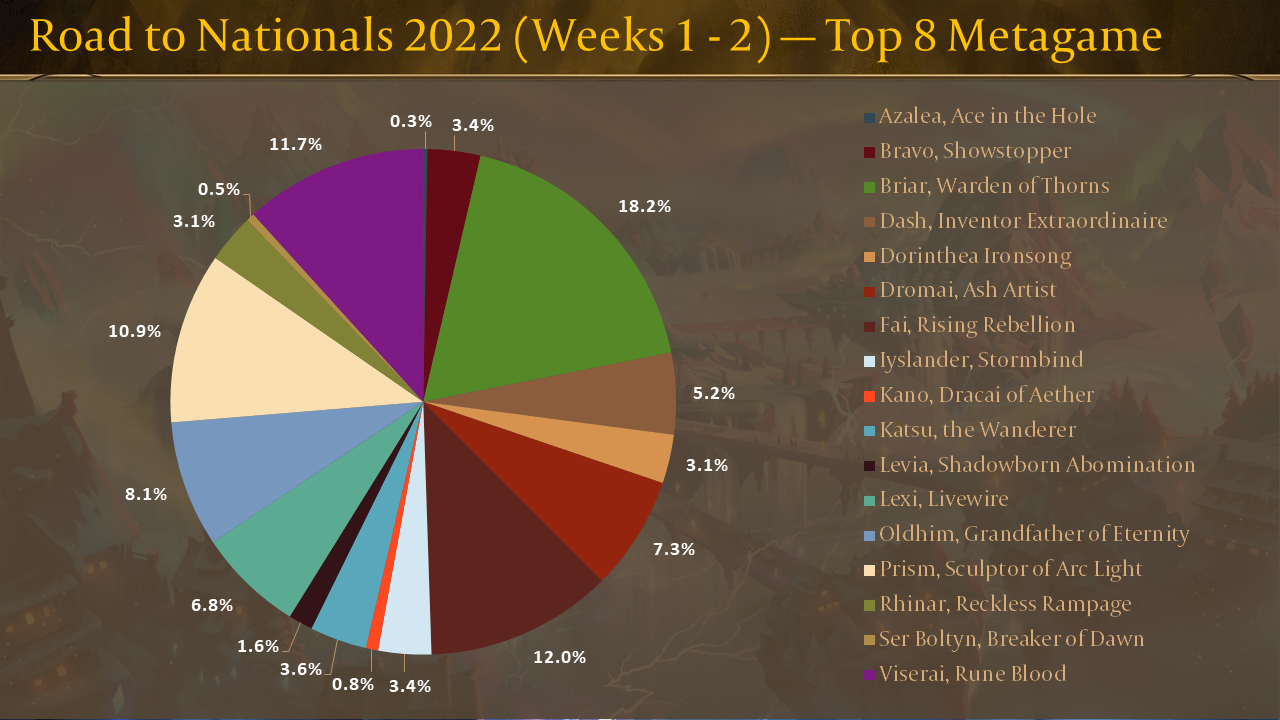 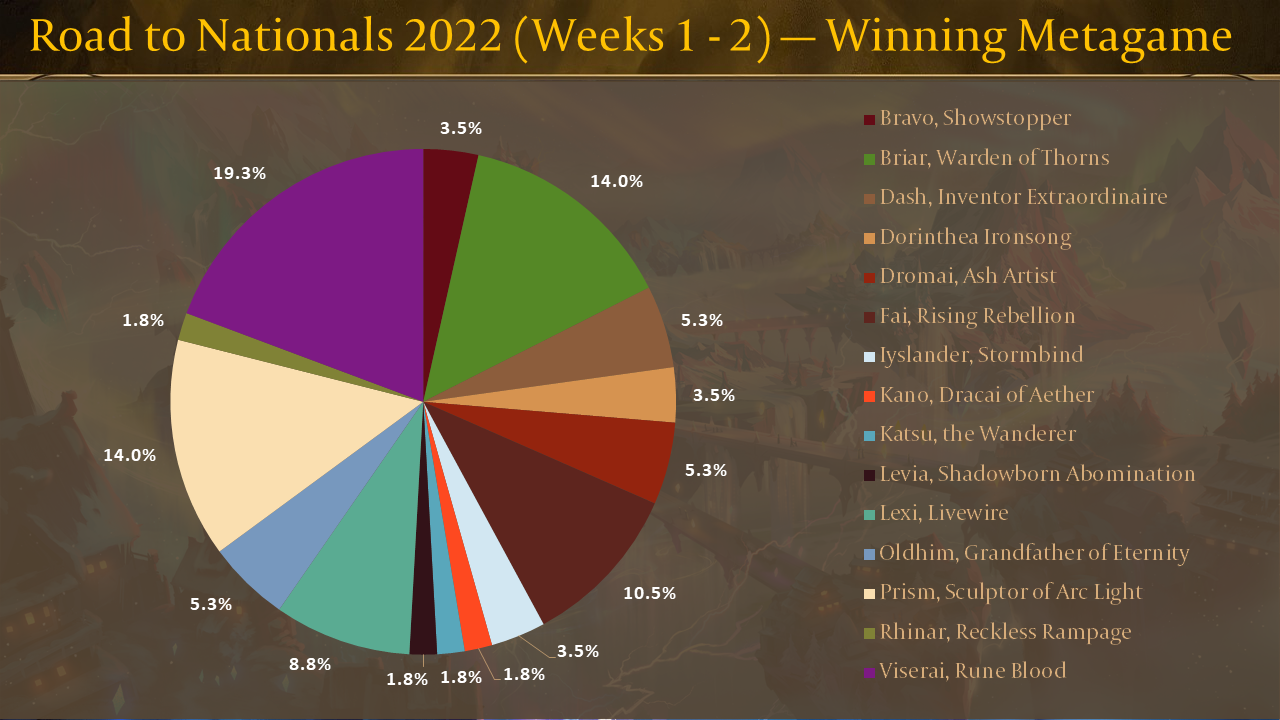 As expected, the more popular heroes make up larger proportions of the wins; the surprise here is Viserai, who is the 4th most popular hero but the hero that took down the most Road to Nationals events this season. The rest largely tracks with what we expect: heroes that have higher player populations will obviously be better represented amongst the winners. This is good for a “current” metagame snapshot, but it doesn’t tell us which heroes might increase or decrease in popularity moving forward. Players naturally gravitate towards heroes that can pull off consistent victories and perform well against the field; what we are interested in, therefore, is the conversion rate between the general population, the top 8 population, and the winners. In other words, of the total population of players playing a particular hero, how many of them went on to make top 8 of an event, and how many of them ended up winning? Let’s look at the heroes with the best conversion rate for each:

Right away, the standout winner here is Viserai, who is quickly establishing himself as one of the decks to beat in this format. Though Viserai is flexible enough to be played aggressively or at a slower pace, his key builds right now lean aggressive, making him the measuring stick other aggressive decks have to measure against. He not only overperformed his metagame share going into top 8, but also overperformed in victories as well! Be on the lookout for Viserai to rise in popularity over the next few weeks as players realize that he’s still a force to be reckoned with, Bloodsheath Skeleta or not.

As our other Runeblade representative, Briar is trailing Viserai’s top 8 conversion rate, but she notably drops off when it comes to converting that top 8 finish into a win. This indicates that there is usually a match during the top 8 rounds that is causing Briar players to lose - it may be an unfavorable matchup, or it may be the inevitability of a few bad hands that Briar often finds herself stumbling into.

Despite the aggressive Runeblade decks having strong conversion rates, we don’t see too many other aggressive decks among the high performers. Dash leans aggressive, but the rest of the top performers are setup heroes like Prism and Dromai, and disruptive heroes like Lexi and Oldhim. We also have Kano sneaking into the win conversion chart, though that does come with an asterisk that his high win conversion comes from an overall low player population, taking only a single victory so far this season. Whether Kano players can continue the trend remains to be seen.

So what can we glean from the data and how do we apply it to how we view the metagame as a whole? Using the data above, we can conclude that our “pillars of the format” - in other words, the decks that our metagame seems to be based around - consist of three general deck types:

These three general classes of decks form a pseudo-rock-paper-scissors metagame where one group of decks that’s overrepresented in a metagame can theoretically be checked by the existence of the other pillars. Of course, individual decks’ strengths and weaknesses will vary, and players playing decks normally disadvantaged towards others can tech themselves to be better against them, so take the above information as a rough guideline rather than categories that are set in stone.

That being said, having a big picture is one thing, but for many players, the devil is in the details; what can one expect out of individual heroes in respect to the larger picture? How are heroes building or adapting to their local metagame, and what’s been finding success?

Let’s start with breaking down our new stars: Dromai, Fai, and Iyslander. One important thing to keep in mind is that unlike the other heroes, the heroes in Uprising are completely new - while they’ll enjoy a slight advantage in that many players are unfamiliar playing against them, it also means that the players on the three Uprising heroes are likely still in the process of figuring out what works and what doesn’t for them. 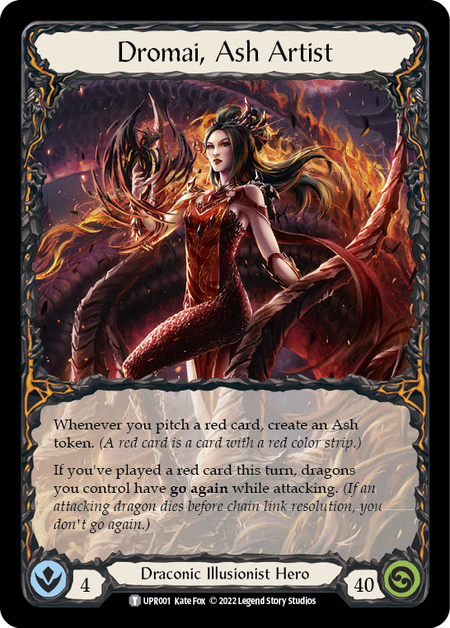 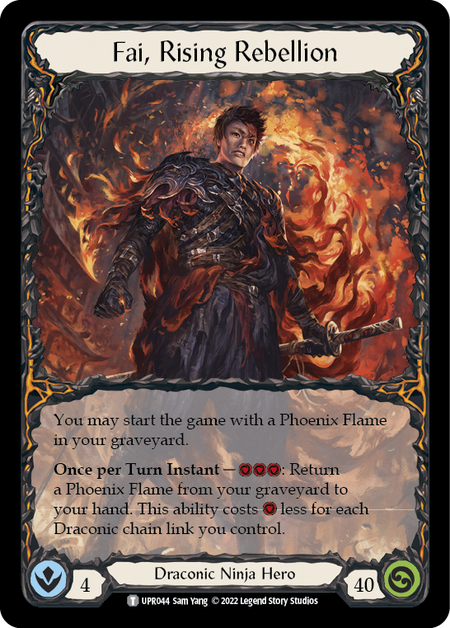 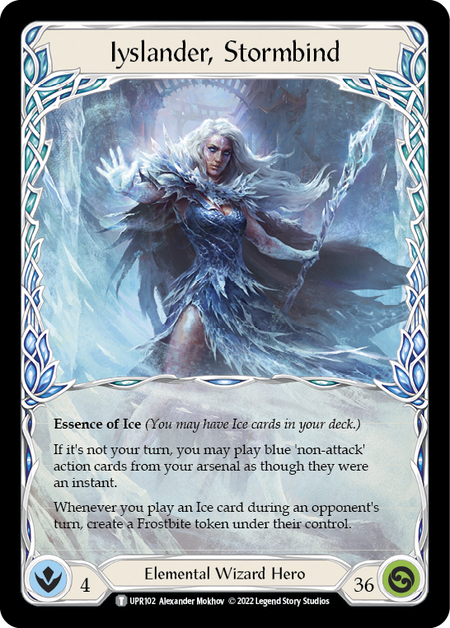 Dromai and Fai both had above-average showings over the last few weeks, and we can expect their positions in the metagame to evolve and adapt as players figure out their optimal lists and opponents figure out what works against them. Both have some wildly disparate lists that focus on different playstyles and strategies, so time will tell which ones - if either - become favored over the other.

Dromai’s first type of build centers on a somewhat aggressive strategy that utilizes as many invocations as possible to overwhelm the opponent with dragons and aggressive cards like Embermaw Cenipai and Dunebreaker Cenipai. Her other major variant opts for more patient, defensive play with only the dragons central to her gameplan included in the lists, supplemented with defensive cards like Oasis Respite and Sigil of Solace to help keep her life total up as she chips away at her opponents’ defenses with Burn Them All.

Fai’s builds all tend to be aggressive, but can be differentiated by their choice of weapon. Builds using Searing Emberblade tend to focus on draconic chain links, utilizing the explosive power of cards like Tome of Firebrand and Spreading Flames to rush the opponent down. Builds featuring Harmonized Kodachi tend to play more like a classic Ninja - utilizing long strings of small strikes like Belittle to trigger Mask of Momentum, putting consistent pressure on the opponent to block with little reprieve. There’s even a build featuring Edge of Autumn, which found success relying on blues like Flying Kick and a full suite of strong on-hit effects that don’t rely on running low-impact 0-cost blue cards that the Kodachis would necessitate!

Iyslander was no slouch either. Reactive decks like Iyslander tend to be the slowest to fully adapt to an emergent metagame, but despite that, a few strong players found success with her and will likely continue to find success with her throughout the season. Much of the current builds with Iyslander focus on getting chip damage via Waning Moon and several of her smaller blue attacks to get the opponent down to around 10 to 13 life with a few Frost Hexes in their arena, then finishing them off with a big Freezing Point or Ice Eternal. 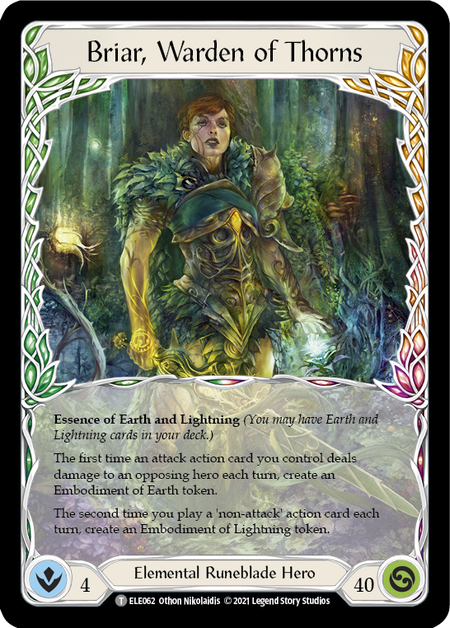 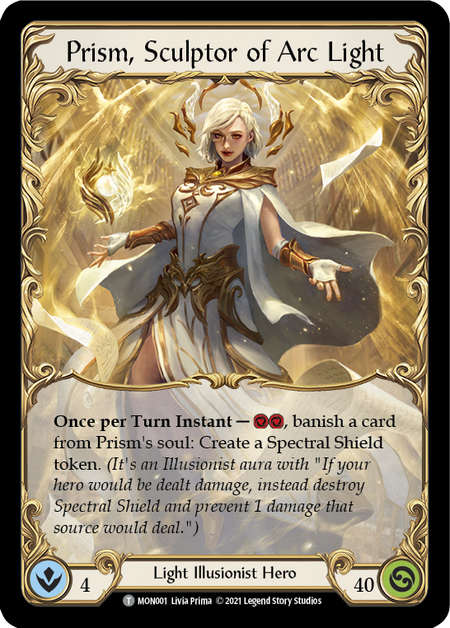 The other major heroes have picked up more than a few new tricks up their sleeve as well! There’s a few spicy lists to talk about so without further ado, here are a few hero highlights from the last few weeks:

Briar has held her place as one of the top decks this season, with a few new tricks. Lists like Alexandros Argyriou’s runner-up list have picked up Sift and Crown of Providence as ways to ensure the aggression never stops, digging for attack action cards when Briar occasionally draws a hand without one. Also notable in the list is Vigor Rush (Red), a card that has seen middling amounts of popularity in the past but may have some new life breathed into it with the increased non-attack action card density.

Prism remains a strong contender at the forefront of the metagame, with many lists picking up a few new sideboard choices in the form of That All You Got? and Fog Down. Also spotted among the lists are a couple copies of Fyendal’s Fighting Spirit (Yellow) - a unique choice for a phantasm-popper that can also help gain a bit of life while doing so!

With what could best be described as a “Classic” Rhinar list, New Zealand local Gene Brumby took down his Road to Nationals at Sushi Knight. The deck is worth mentioning because it’s one of the few that sports no cards from Uprising. Shiny new cards or no, Rhinar can still deliver the beats! Many other Rhinars are experimenting with sideboard cards like Fog Down, Erase Face, and Crown of Providence to better prepare for specific matchups.

Dash has made her way back into the metagame as two of her hardest matchups have entered the annals of Living Legend. Several recent successes with Dash have come from newer boost-focused builds that aim to get out a few early Teklo Pounders to really lay down the beats with several big hits. Other “classic” midrange/control builds that primarily feature the Induction Chamber plan have also been successful, picking up Erase Face in place of Command & Conquer as a small sidegrade.

Last, but certainly not least, we have Levia, the perennial dark horse and plucky Shadow Brute. Levia faithful Ethan Man Sant piloted her to a second-place finish at SCGCON’s Road to Nationals, utilizing an unexpected choice in Trade In (Red) as unique tech to filter hands, get 6 power cards in graveyard, and add a bit more aggression to her turns.

And that’s not all! The deckbuilding prowess the FAB community shows is endless, and highlighting all of the emerging and creative builds would take all day. I hope to continue to have this problem in two weeks where I’ll be back in the saddle again to give you all an update on how the Uprising CC metagame continues to develop and mature.