Many of the greatest and most entertaining card games of all time are played with a 52 card deck. We hope to add one more to that list, with 52 card Blitz!

Why add a new format now?

Blitz is something that we have been developing for a while and planned to introduce alongside a fun OP program called Rathe Quest in Q4, and to support this thing we planned to release in 2021 called Play Anywhere... Because covid-19 has shut down in-store OP in many countries, we brought forward Play Anywhere, which released in public beta mid-June.

Blitz is our recommended format for Play Anywhere, and for stores who are able to run OP but must comply with health and safety guidelines that often require gatherings to be limited to short time frames.

What is the intention for Blitz and other formats?

Flesh and Blood is primarily designed for Classic Constructed, Booster Draft, and Sealed Deck competitive play. Our intention is that these formats will continue to be the focus of competitive play.

Blitz serves a different purpose. It offers fast and fun games, which we believe is a really good fit with Play Anywhere, social gaming, and time constraints some local game stores are operating under (whether it be from covid-19, or because there's only 2 hours available on a Friday night before closing.)

Blitz will be an officially supported format, including:

The following cards are restricted to 1 copy per deck in the Blitz format (as at July 1, 2020).

Something fun and fast to leave you with!

The Legend Story Studios team has had a tonne of fun playing Blitz. We hope you enjoy the fun, fast games as much as we have! In the spirit of fun and fast, here's a quick look at some of the new Blitz friends you'll find in Crucible of War, releasing August 28. 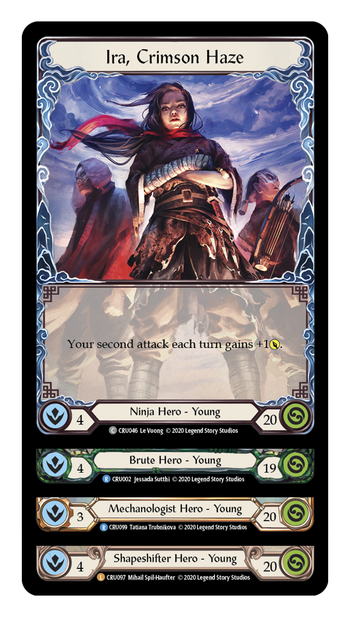