Mariusz Suchanecki is a player from Poland with a very long history in gaming, describing himself as a TCG veteran. His name became well-established throughout the first Skirmish season, regularly appearing in online tournaments all over the world. When I sat down to talk with him via Discord, he’d just put his kids to bed, and opened the conversation with his history in card games.

‘To give you an idea, one of the TCG’s I used to follow just had it’s 25th anniversary recently. I’ve seen one of my favourite card games rise and fall, so. I’m kind of a veteran of TCG’s. Sometimes, I smile when I play with my play group, because I have cards that are older than some of the people I play with.

‘I’m not with every single TCG from the very beginning, it has to have flavour, and good mechanics - but I’ve definitely seen a lot of them over the years.’

Mariusz first got into the game through the community - he quotes the TCG community in Poland as close, even in spite of the physical distance between some of the players. At the time, Flesh and Blood wasn’t widely available in Poland, as Mariusz got into the game before European distribution began.

‘You could really only get the game through importing them or buying them online. So some of my friends were calling me, saying “Oh, this one you’re gonna love.” I said no. Twice. I regret that decision to this day,’ he laughs, ‘but I said no. Mainly because, at the time, there was no LGS to support it, and no people around me who I could play with, but eventually, they convinced me that I should at least try it.’

That was in around October, shortly before the official European release of Flesh and Blood, when Mariusz picked up two hero decks from a friend in a different city.

‘I got a Katsu and an Azalea deck to play at home with my wife. I really liked it, and that’s how it all began. I had no LGS supporting the game, there was no one else in my city who played FAB, so we started from scratch. My friends had some cards in boxes that they bought online - and they’re still playing to this very moment, so I assume that they really love the game as well. They built some decks for me and my wife out of commons and rares, and that’s how we got started.’

‘I got hooked with Katsu, and Azalea was for my wife, and the ninja flavour was something we’d really enjoyed in previous settings, so this one was a must-have for us. We just had to try the ninja class.’ 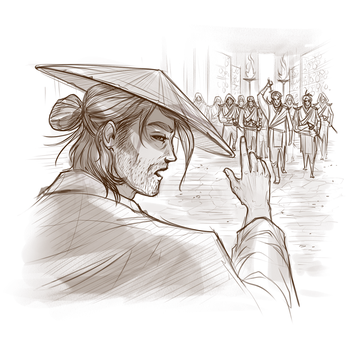 When it came to building a community for Flesh and Blood in Poland, and finding other players to match up against, while Mariusz was initially the only FAB player in his city, he explained that the TCG community in Poland is already close to begin with.

‘I mentioned that people in Poland that play card games are pretty close to each other, so anything new that comes out, we already have a strong community of players in general. As far as I know, I think the first FAB community built up in Poland was in around August? That was when I first found out about the game, at that time, but as I said, I was waiting, and my friends in the FAB community convinced me that I have to try it.’

‘It’s a very close community. It’s spread all over the country, but we have at least five major cities that have events, and some in smaller cities. We also often travel, and meet each other to play FAB in the local game stores in different cities.’

‘To be honest, for my first FAB games - after we played some at home - I had to travel for four hours every weekend to actually take part in a tournament. I do it almost every week since then - that’s how close the community is, in Poland.’

When the Skirmish season was announced in Poland, it wasn’t just his introduction to Katsu that led Mariusz to the path of Ira, Crimson Haze.

‘When our LGS found out about Flesh and Blood and ordered the first few boxes, to actually see what the game is all about, I also messaged all of my friends in the local city to come and check [it out]. So my store also got some Ira welcome decks - unfortunately I was actually an hour late to the [release] event, so I couldn’t participate, I couldn’t win any prizes, but I did get my hands on the Ira deck, and… that was it. So, since November, I’m mainly playing Ira.’

‘I enjoy playing probably most of the classes? Ira was my first choice, but I had to find a different hero for Classic Constructed, obviously. So I was playing Katsu, and I was testing different heroes, but yeah! I can say that Ira, with her playstyle, is definitely one of my favourite heroes so far, particularly because of the ninja class.’

When I asked him what it was about the ninja playstyle that appealed to him, specifically, Mariusz gave me an unexpected answer, quoting golden girl Dorinthea as a defining factor.

‘Actually, there are a few things. Firstly, it’s a bit of an archvillain story. So… Everyone knows Dorinthea, the elephant in the room. How I see Dorinthea is - for me, it’s a hero for high school bullies, that really enjoy hurting people-’ he laughs, ‘well, not hurting, but… they really like the pain in the eyes of their opponent. It’s when you make people do choices, and it’s like every single choice they make is a worst-case scenario, for them. So Ira, on the other hand, is like a hero to save them all. So for me, Ira is the one to stop the archvillain. I think Ira is probably the most likely to stop Dorinthea from taking over. 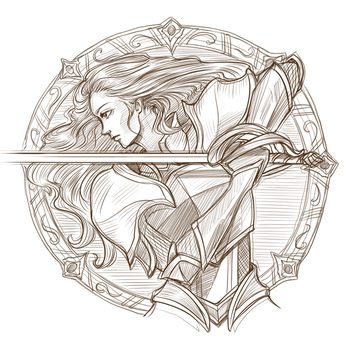 ‘Plus- I really like how well Ira works with generic cards. I think that Ira is a hero that every single Flesh and Blood player should have at least twenty to twenty-five games on, because Ira really teaches you how to be efficient in the basic game mechanics. How to attack efficiently, how to block efficiently, and that makes a really good basis on how to play Flesh and Blood.’

What wasn’t an influence in his decision to play Ira was the Skirmish events themselves. Mariusz said he’d initially been nervous about the announcement for the first season of Skirmish, saying that he’d been concerned about the introduction of online play.

‘I wasn’t a believer, but then what happened, with just the webcams, and the quick setup - I was hooked into it. Every single dream of my life came true, I would say, because I could play a game in my local store in the afternoon, and then later, in the evening, I could play a tournament in the United Kingdom, and then after this one is finished, I was playing a few games in the U.S. and Canada. That was really amazing. I was actually hooked more by the process, and the ability to be able to play, and then competing came up naturally.

The ability to play in so many tournaments was a major draw, as Mariusz had already decided in December that he wanted to reach 1,000 XP.

‘When I saw on the website that there was a ranking- our playgroup is very competitive, so I knew that’s gonna be the goal. At the time, I didn’t know that there was a prize for reaching that goal. But I decided at that time that I was going to try to be #1. At that time, I wasn’t #1, because I hadn’t joined as early as some people had in my country, but as I said, at the time there weren’t many tournaments, so the points were accumulated really slowly.’

Taking into account all of that experience against international players, Mariusz maintains that, while there is a skill gap between New Zealand players and the rest of the world, it’s getting smaller and smaller.

‘Europe and North America, we finally got our hands on the cards now, and I believe that there’s a lot to learn from New Zealand, but there is also an element of surprise. What I’ve noticed is that Europe and the U.S., they play a different game, so we’ve had a lot of time testing and playing from different players all over the world; I have no idea if New Zealand was so involved in tournaments online. I bet that they did not, and that can also be an advantage of European and North American players. We do a lot of testing in different playgroups, and we learn a lot from New Zealand, so we have the best of two worlds.’

Naturally, when it comes to international play, and the topic of a World Championship, Mariusz responds:

‘First of all, the community - meeting all the people in-person, who I’ve spoken with online, read the articles about - but also the experience. At some point, there’s more than just the skill, and you have to figure out the opponent, and I think that’s the most exciting experience, to try to outthink your opponent, and the people at the best level are really good at it.’

And, finally, Mariusz finished out the interview by asking to pass on his gratitude to others.

‘Firstly, I would like to thank James White and the whole LSS team, for creating this amazing experience. Also, to the great community, it was really a pleasure to face them all. I’ve made a lot of great friends all across the world, we faced each other and were chasing and helping each other every single tournament, so we’ve built a connection that’s - I hope it’s for a long time. And that’s across national communities. To my family; for everyone that would like to be competing for 1,000 points, support from family is the most valuable thing to have. Without them, without the support of my family, I wouldn’t be able to do it, so my biggest thanks goes to them.’